October 21, 2012:  This Sunday is the first time I take a local flight in Brevard County in my airplane.  The flight begins at Rockledge Airport with a takeoff from runway 36 and a short flight of about five miles over to Merritt Island Airport (KCOI).  I circled one time over the field well above the pattern altitude to get a look at the number of planes and helicopters that are active here today.  I could see the few airplanes working in the pattern and the one that departed.  I fell in behind the last guy in the pattern flying in a Piper Arrow and flew the left downwind leg and turned base as he passed off my left wing on final approach.  When I turned final, the wind became an issue and I added more power to get to the threshold.  There was a flight of two Robinson helicopters lifting up on the ramp just south of runway 11 just over half way down the runway.  They crossed the runway as I touched down on the numbers for a touch and go.  I stayed on the runway until they passed over to the north.  I added power and took off over the river and turned out of the pattern to the southwest to get out west of I-95 just south of the Rockledge Airport. 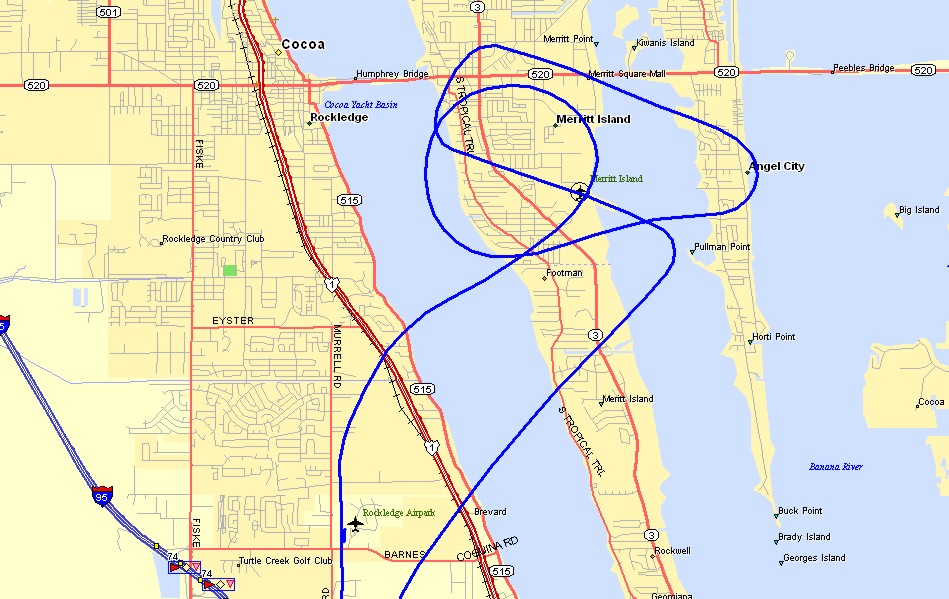 Flying down the west side of I-95 keeps me clear of the Class D airspace for Patrick Air Force Base and the Melbourne Airport (MLB).  I listened to the Melbourne control tower as she worked a number of airplanes on this severe clear day.  My return to Rockledge was via the shoreline up to the air base where I flew over their class D airspace above 4,000 feet MSL as I turned away from the ocean. 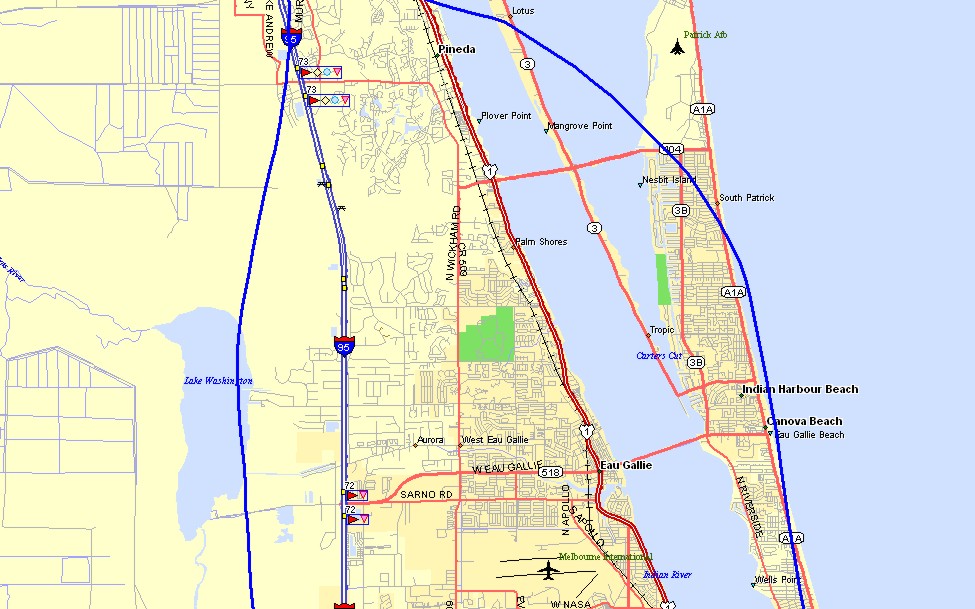 At the south end of my local route, I flew over an abandoned air field listed on the map as Air Force Eastern Test Range.  I descended over the Valkaria Airport to see no activity there.  Before heading north along the beach.  I called the tower at Patrick AFB since I was hearing him working an airplane flying in his traffic pattern. 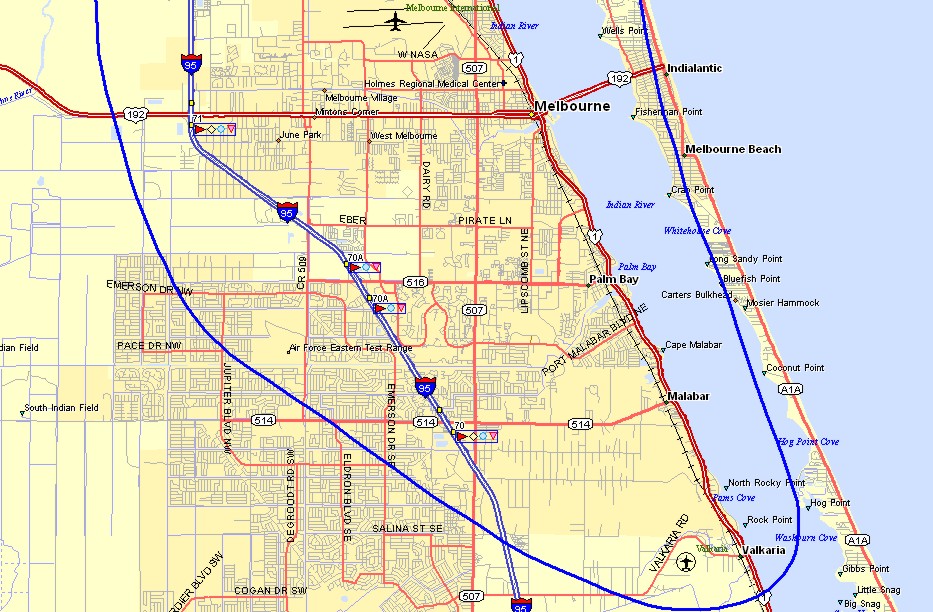 The landing back at Rockledge was on runway 36 into the wind.  The sock was straight down the runway there when I touched down.  I had the camera in the airplane, but did not take any photos from the air as I was too busy at Merritt Island Airport and just getting a good look at the area when I was flying down past Melbourne and back up the beach.  The Hobbs meter added 0.9 hours today and 2 landings went in my log book. 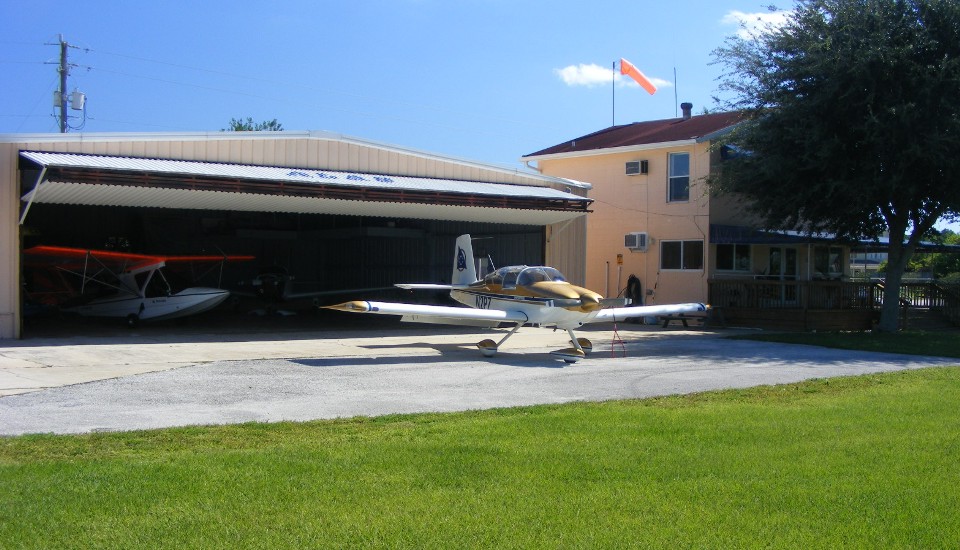 The Enterprise now has 338.7 total hours on the Hobbs meter.  My total flight time is now 530.8 hours with 722 landings in my pilot log book.

November 10, 2012:  I really went somewhere in Florida today, not just "around the block" as I did above.   There was a fly-in for lunch today at the Winter Haven, Florida airport.  I headed over that way from Rockledge Airport at 10 AM.  I had a 20 MPH tailwind in the first leg of the flight heading southwest from Rockledge Airport.   The GPS ground speed varied between 130 to 150 MPH during the trip to Bartow.  I took this photo of farmland off the beaten path down south of the Orlando Class B airspace.  The city of Orlando is hiding in the haze about 30 miles north of this location. The water management canals like the one just ahead of the wing in this photo are part of the flat lands of Florida. 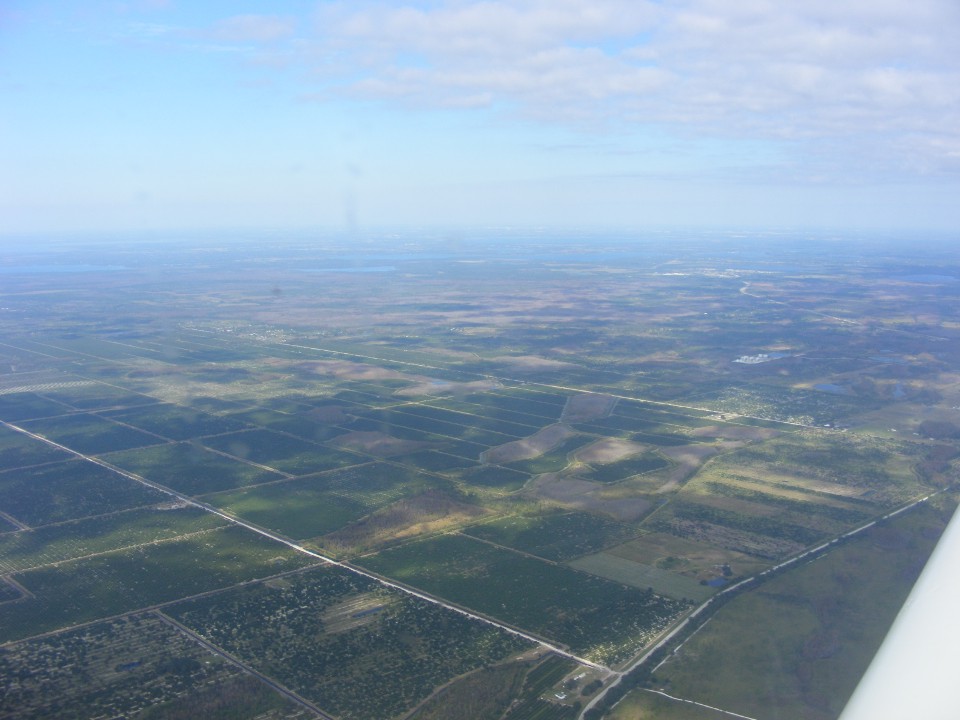 This photo is looking northwest of my position over the Florida Turnpike in Osceola County south of the town of Saint Cloud.  The Canoe Creek service plaza is at the turn in the highway just north of that canal running across this photo.  The two-lane highway in the photo is county road 523.  Cypress Lake is on the left side of the photo.  Lake Tohopekaliga or "Big Lake Toho" as it is referred to by the locals from Kissimmee, Florida.  Kissimmee is located at the northwest corner of the lake in the haze beyond the curve in the turnpike.  The land below is grazing land for cattle and there are some chicken houses down there that are visible when driving in this area.  You can also see an occasional BALD EAGLE down there near one of the lakes. 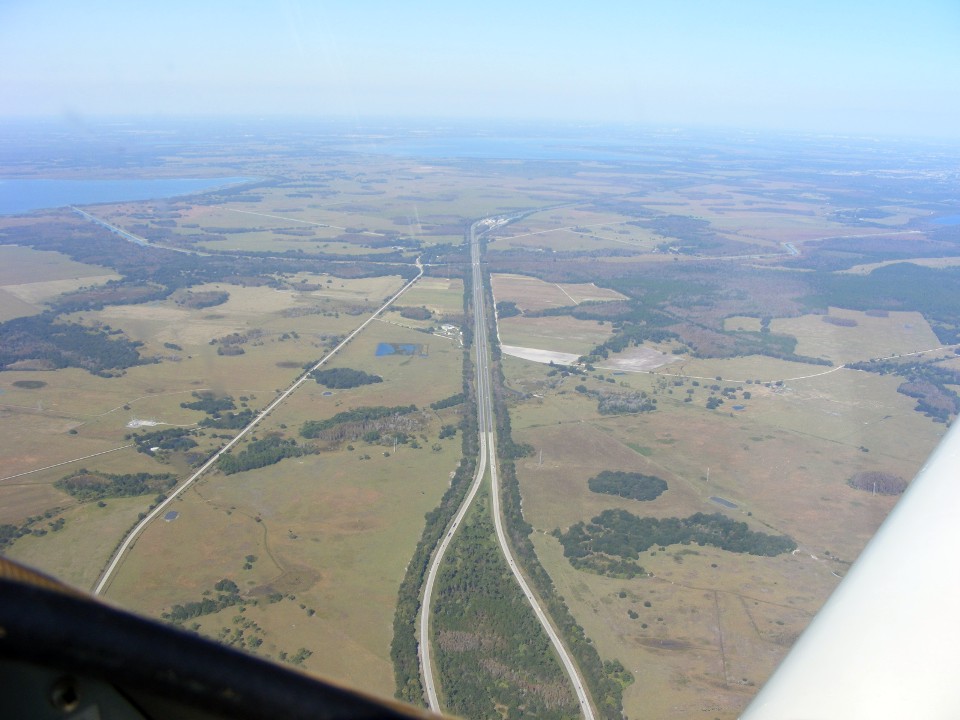 This short trip today was flown using the Orlando Terminal Area Chart and my GPS of course.  That is Lake Pierce below and the private grass air strip known as Southerly Airport (58FD) a few miles east of Dundee, Florida.  My GPS and autopilot were keeping me on course as I flew in the uncontrolled airspace between the Avon Park Bombing and Gunnery Range south of my route and the Orlando Class B Airspace to the north.  I was using the Orlando chart to answer the question of where could I land if I had a problem.  I noticed the private airport ahead on the chart and made this photo as I passed near it.  The green runway is beyond the golf course and ends near the bug smeared on the windshield at the right side of this photo.  I have since added the private airport to my GPS waypoint database. 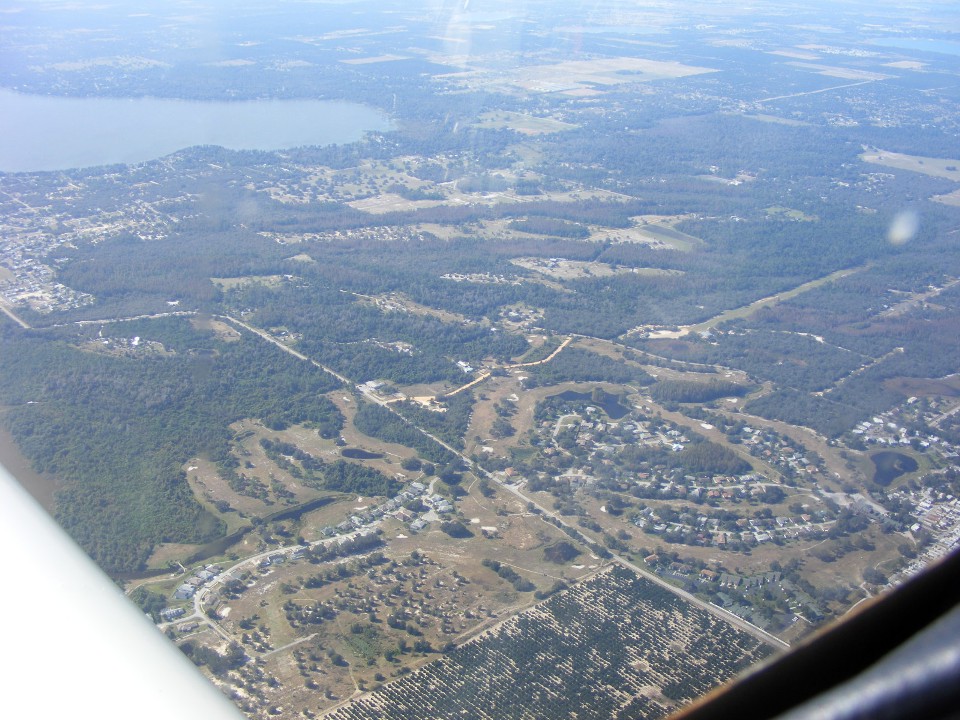 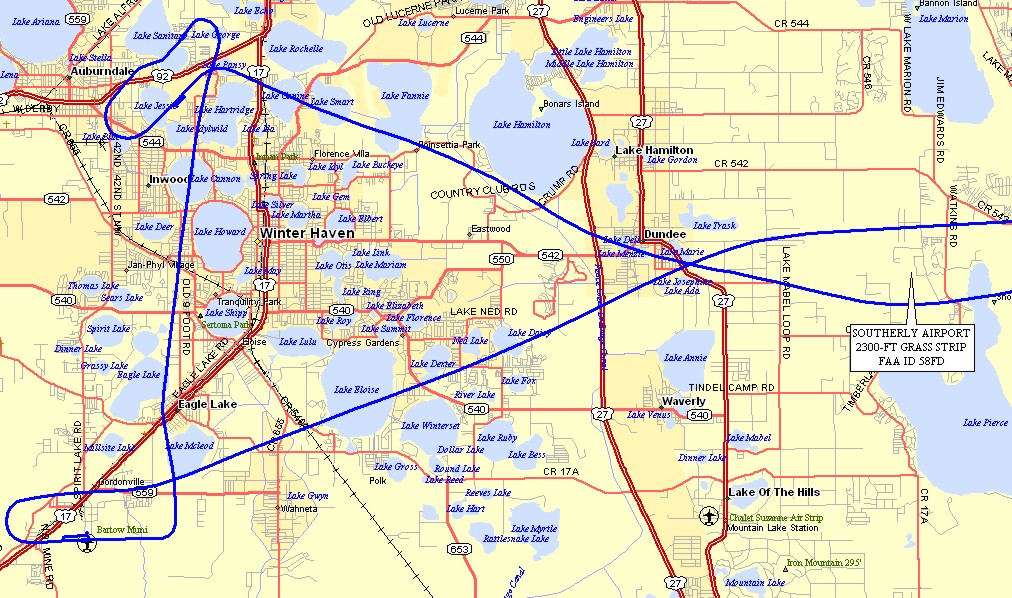 My stop at the Bartow, Florida airport was to get fuel.  I filled the tanks with a purchase of just under 22 gallons of 100 low-lead AVGAS.  I last bought fuel at the Hazlehurst, Georgia airport (KAZE) during the flight to Florida October 7, 2012.  This fuel stop was from 10:40 AM to 11:00AM. 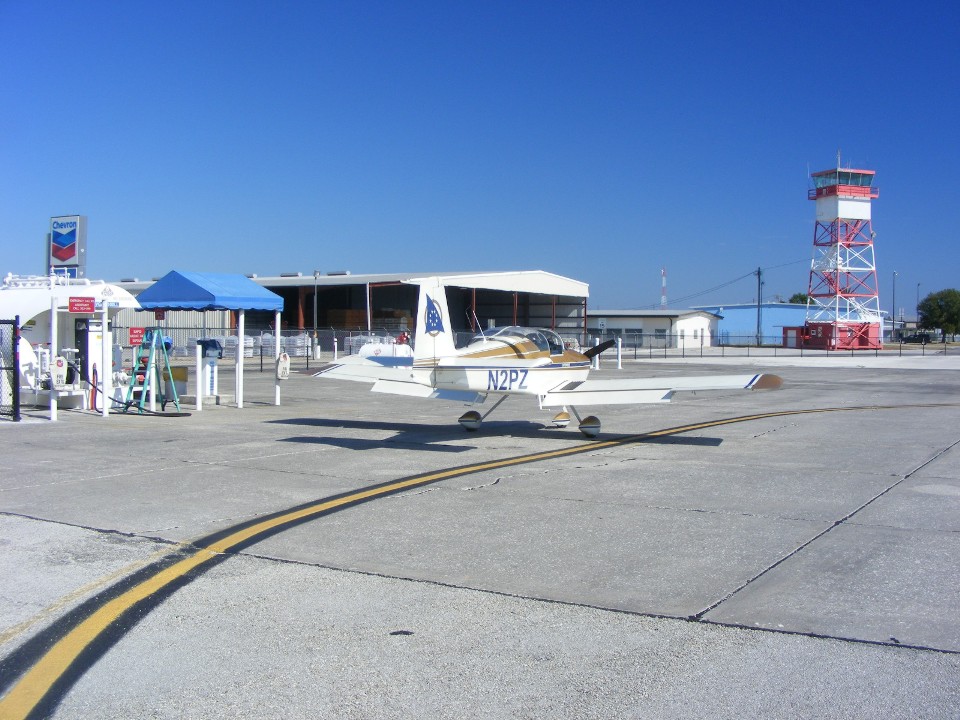 My GPS ground track shows the modified pattern I flew for runway 5 at Winter Haven.  I needed to see a plane below me I heard on the radio as I was flying the downwind leg, then extended my downwind to let him land ahead of me.  The ground track comes from Bartow at the bottom center of the map and indicates the taxiway and my parking location on the field near the end of runway 5 at 11:16 AM when I turned off the GPS.  Some of that 16 minutes was on the ground at Bartow before takeoff and of course the time to get in the pattern, land, then taxi to my parking spot.  My departure after lunch at 1:22 PM is turning East at the right side of the map. 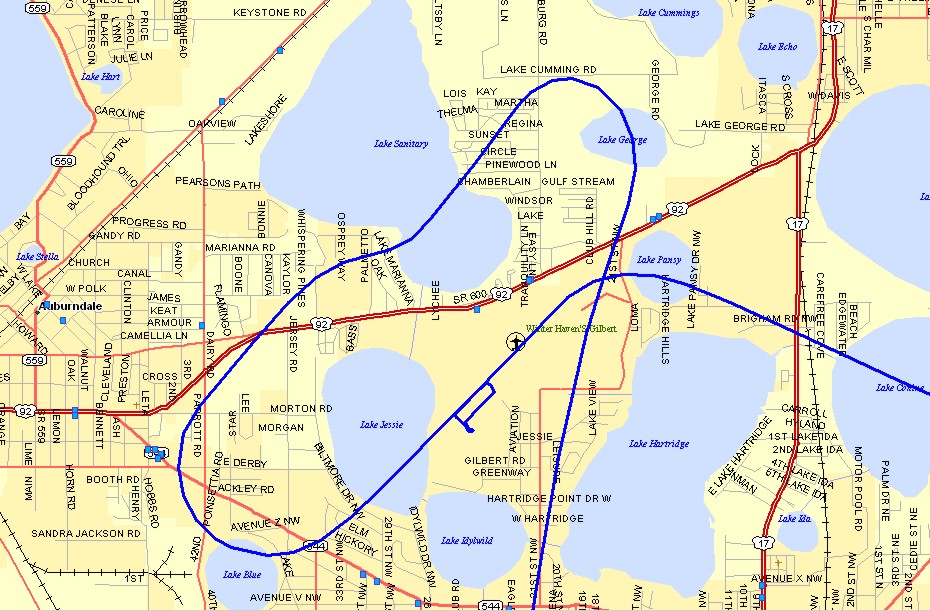