January 13, 2008:  I stopped by the hangar expecting to have the place to myself and I find Wendell has been inside taking off the tape and paper from the various areas of the airplane, except for the windshield.  I took the appropriate photos of his YELLOW airplane and posted them on his PAGE 78.  This page is about my airplane and how it survived the painting that happened just a few feet away in the temporary paint booth.  You can see that my plane is still "gift-wrapped" in plastic and will remain that way until the blue trim is completed on Wendell's RV-8. 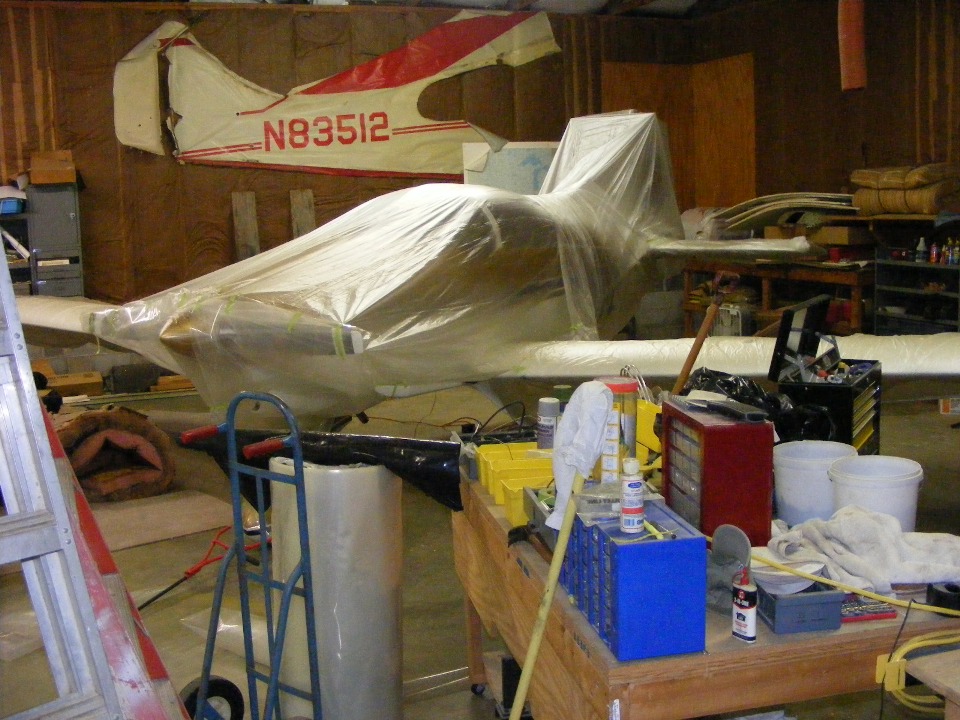 Here is a view of the bottom of the paint booth south plastic wall held down by these wooden boards.  Wendell and I walked around on this side of the plastic wall and found no paint spray residue on anything.  Better safe than sorry about protecting my paint job and canopy.  When you look at the last photo on Wendell's PAGE 78, you will know where the paint residue went. 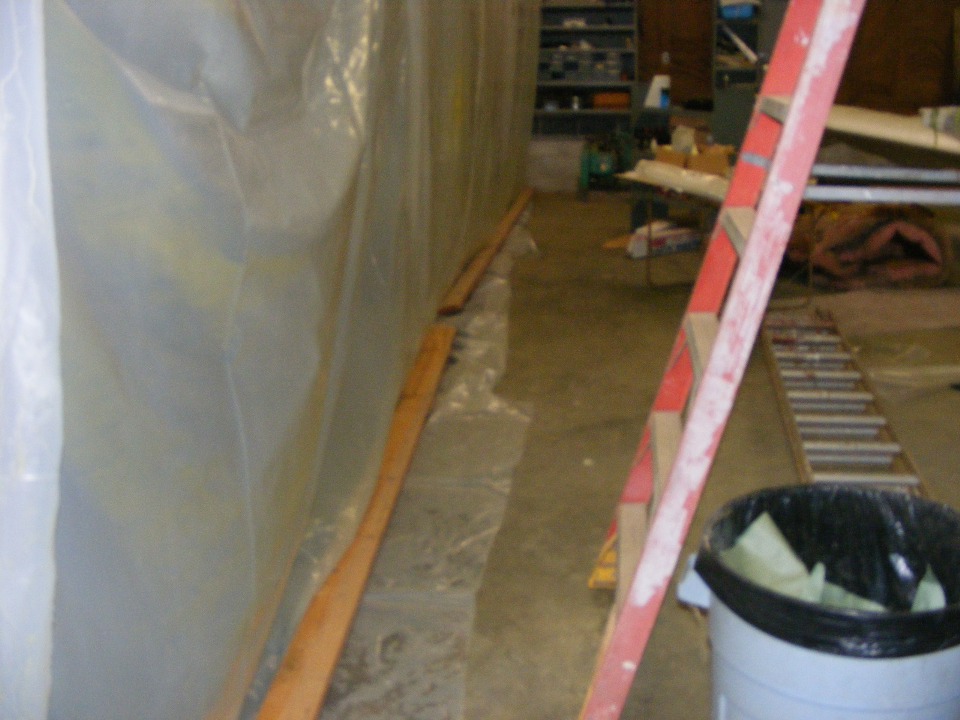 January 19, 2008:  A Saturday morning update before heading out for the day's adventures.  I took some new photos during Thursday and Friday evening  sessions with Wendell.   Many in the USA know of the winter weather that threatened the southeastern US this past week.  I was out on a day trip on Wednesday and made it back home in snowy weather during the last 20 miles of driving.  More snow was forecast for today, but so far has not become reality.  The temps are going down into the 20's (F) tonight.

I called Wendell to see if we were going to have a Saturday afternoon session.   He has things to do today and we decided not to get together until possibly tomorrow afternoon (Sunday).  We had completed some tasks last night and I realized that I could not continue his training for the Dynon D-10A without the printed manual and setup instructions for the version 4 software.  I downloaded the manuals and double-side printed them today since both our printed manuals were outdated.  Some of the things I read in the manual gave me cause for a call to Dynon support.  My question is about the magnetic calibration methods for a tail-dragger and whether or not I need to level the airplane when it is on the four magnetic cardinal headings.

January 20, 2008:  The Sunday session today came off as planned.  I sat in Wendell's RV-8 and checked the avionics now that all the antennas are connected.  Due to the very cold weather, we did not take the airplane outside to test the GPS.  We already know that it works just fine with the remote antenna.  The rest of the details and one new photo are on his PAGE 79.

January 27, 2008:  A late Sunday update after spending all afternoon with Wendell.  The weather was great for working outside to do magnetic calibrations of the wet compass and the Dynon remote magnetic sensor.  After that, it was time to put in a few gallons of AVGAS and crank up the engine for the first time.  The details are on his NEW PAGE 80!

January 30, 2008:  It is past working hours now, so my attention turns to updating this web site with new information about Wendell's RV-8 project.  I went over to the hangar last night to help him.  Details of that visit are on his NEW PAGE 81.  Oh, by the way...he passed the airworthiness inspection!  He has the pink slip and is preparing for the first flight on Saturday - - weather permitting.  It rained most of Tuesday when the D.A.R. was there (and a few friends) for the FAA inspection.

As for Saturday, February 2nd, I will get out the "Enterprise" to fly with Wendell on his first flight.  I hope to get some video along with the usual air-to-air still camera photos of the first flight.  The weather forecast is for partly cloudy without any rain.  We shall see....

February 1, 2008:  It is Friday night and I stopped by the hangar to plug in my engine heater and the timer that controls it.  The forecast is for 29 degrees F tonight.  I also peeled back some of the plastic sheeting to remove one of my fuel caps to show Wendell how snug they are compared to the way the caps are adjusted when received from Van's Aircraft.  I told him about the fuel leak I had on my second flight due to a loose filler cap. 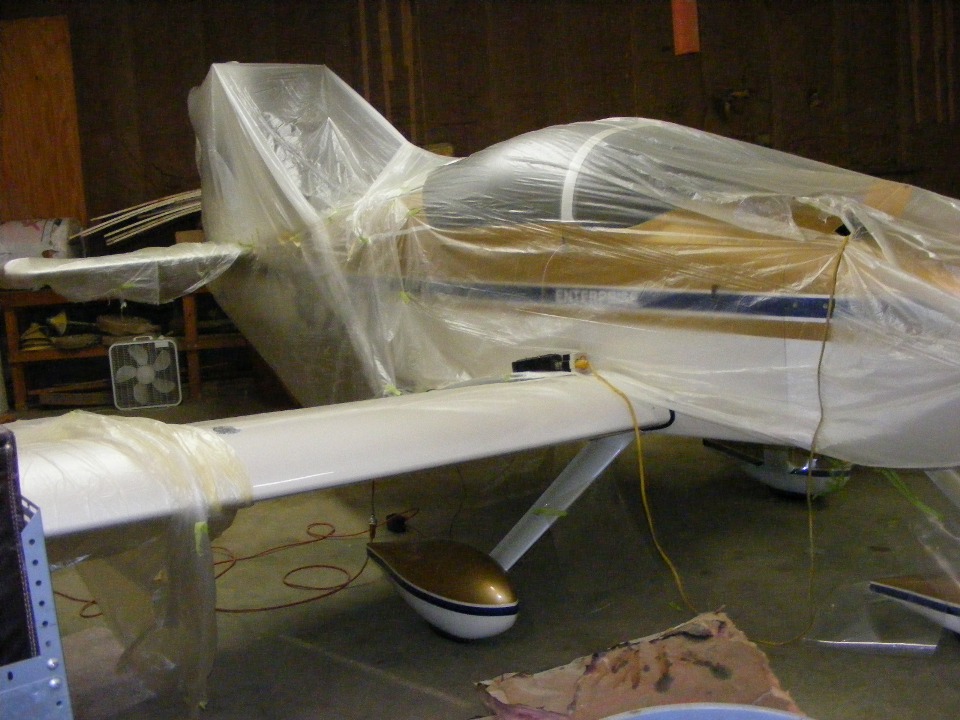 Before my departure, Wendell and I created a check list for the takeoff and the buttons that needed to be pushed on the engine monitor when the various in-flight alarms would occur during the takeoff and initial climb at full power.  He wrote down each key item on a yellow pad to take with him during the flight tomorrow.

I left the plastic on my airplane and went to buy groceries.  I got home at a reasonable hour, put away the food, watched the 11 PM news and turned in around 11:35 PM.  I rolled, tossed, thought about the Saturday first flight, etc.  Why was I feeling this way?  It is Wendell's first flight, not mine!  I finally drifted off to sleep after 1 AM.

February 2, 2008:  Saturday, and it's Ground Hog Day.  Regardless of how little sleep I got last night, when the radio came on, I started to wake up and managed to get out of bed around 7:20 AM Eastern Time.  The temperature outside was 29 degrees as forecast.  I got showered, had breakfast, and was on the way out the door around 9:20 AM.  I got to Wendell's hangar to find him and his uncle there with Wendell working on the airplane of course.  Just a few more things to do.  The temperature was at 31 degrees outside.  Wendell had turned on the heater inside, but it was still pretty cool in the hangar.  The heated oil temperature in my engine was 79 degrees.

I pulled all the plastic sheeting off my airplane and found a yellow dusty stain on most of the plastic.  It was a good thing we covered it before the yellow paint flew on the other side of the hangar in the "paint booth" seen in the second photo from the top of this page.  When the plastic was removed, I got out my polish and some soft paper towels to remove the dust that had settled on the airplane BEFORE the painting began.  I had the entire airplane looking good and the plexiglass polished before it was time for lunch.

Since it has been a few days since I have updated the web site, you might want to start where I left off on his PAGE 81.  The details of the first flight begin on his PAGE 82.

It is now approaching 1 AM on Sunday, February 3rd.  I am ready to upload all this material and call it a night.  The alarm clock will be OFF and I will catch up on some much-needed sleep after a good day of flying and few minor annoyances.  If you haven't already done so, get going to the two new links above.  Start on PAGE 81 and don't stop until you finish PAGE 83.  And yes, I thought I was going to watch an in-flight home movie this evening - - NOT!  Good night....

February 3, 2008:  Sunday morning, my usual time to update this web site.  It is Super Bowl Sunday (YAWN).  I am not a sports fan.  I will hear the final score on the news tonight or tomorrow.  There is a Star Trek "Enterprise" marathon today on The Sci-Fi Channel.  Even though I have seen all the episodes when they were originally broadcast, I will probably watch them again, avoiding the sports thing.

After a good night's rest, I look back on the excitement of yesterday for Wendell and myself.  I realize it was like birthing a child.  The little things I overlooked like the volume level on my COM radio early in the flight were all part of "cutting the cord" and letting Wendell fly the test with his own skills.   When the alternator problem is resolved, I am sure we will have more flights.   One of the discussions we had before I left him yesterday was about which of the readings on the engine monitor would be affected by the subtle changes in throttle, propeller, and mixture controls.  I will feel better when he has a flight with all the engine settings optimized.  He flew most of yesterday's flights with mixture nearly at full rich settings.

One other thing, while we were over LaFayette talking on 122.75 MHz, another pilot called asking where we were.  When I mentioned where we were, the response from the other guy was like he was amazed.  I did not get a reply when I asked where he was located.

This is Wendell's mother's birthday.  He is doing the family thing as he should.  I probably won't go to the hangar, but just stay home, do some chores and enjoy some familiar stories about the first Star Ship Enterprise.

2:10 PM -- I have completed some of my chores and came back to the computer to look for a photo of my 60-ampere alternator installation compared to what I saw yesterday with Wendell's 60-ampere alternator.  They are different, therefore help from the folks at Van's will be needed.

While I was looking through the older pages of this web site, I found a photo from my first flight that I thought could be reprocessed for clarity.  I added a white ellipse around my airplane and Rich Nadig's RV-3 chase plane.  You can see the details by clicking on this link to MY PAGE 136.

Some much needed rain has come to the Tennessee Valley.  It is a good day to stay indoors and catch up on things.  Yesterday's perfect weather was a good day for the first flight of Wendell's RV-8.

February 9, 2008:  It is a beautiful weather weekend and it was perfect for painting.  I had mentioned the trim painting would be done on Thursday in a previous post on Wendell's PAGE 83.  As it turned out, the painting day was today.  Wendell cleared out the hangar and his RV-8 received the additional blue trim paint.  One metal panel has again been removed from the hangar door to setup the ventilation of the paint fumes via the home-built air filter.  I came over after lunch to find my airplane parked beside the runway facing into the light wind from the west.  I pulled out my rudder gust locks and installed them until the airplane can be put away later today. 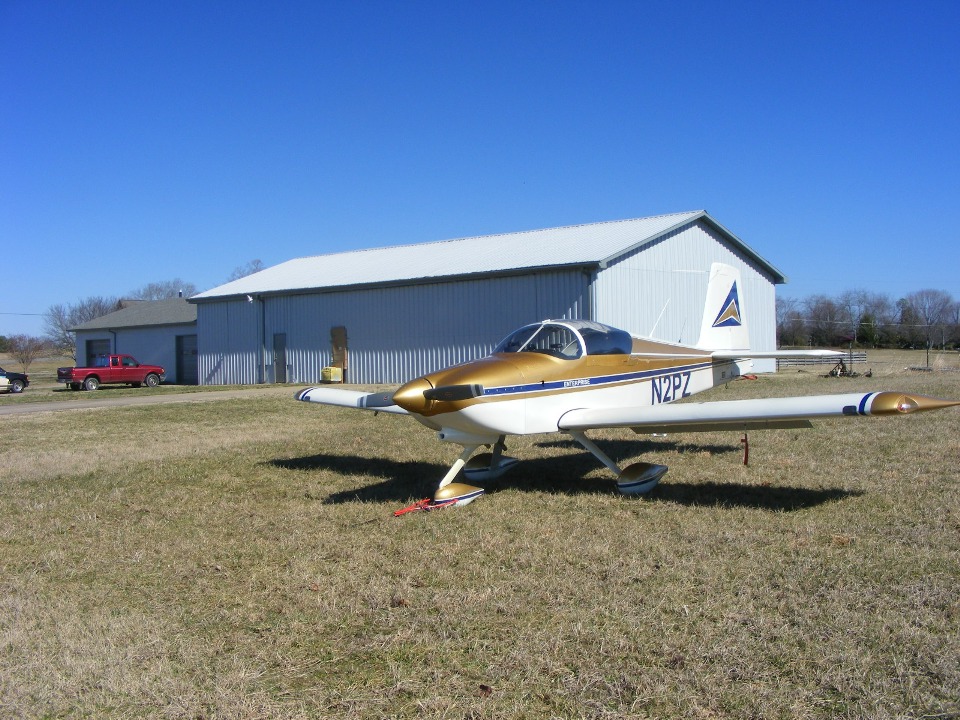 The Aeronca Champ was parked on the ramp at the end of the water hose coming from the building.  It was clear that Wendell plans to wash off some of the dust before he puts this classic old bird back in the hangar later today.   All of the cars on the ramp are from the usual gang of suspects who come over on Saturday morning to chat and see the latest status of the RV-8 project.  They were all coming back from lunch as I was taking these photos.  The latest photos of his RV-8 and the status of recent changes are on his NEW web PAGE 84. 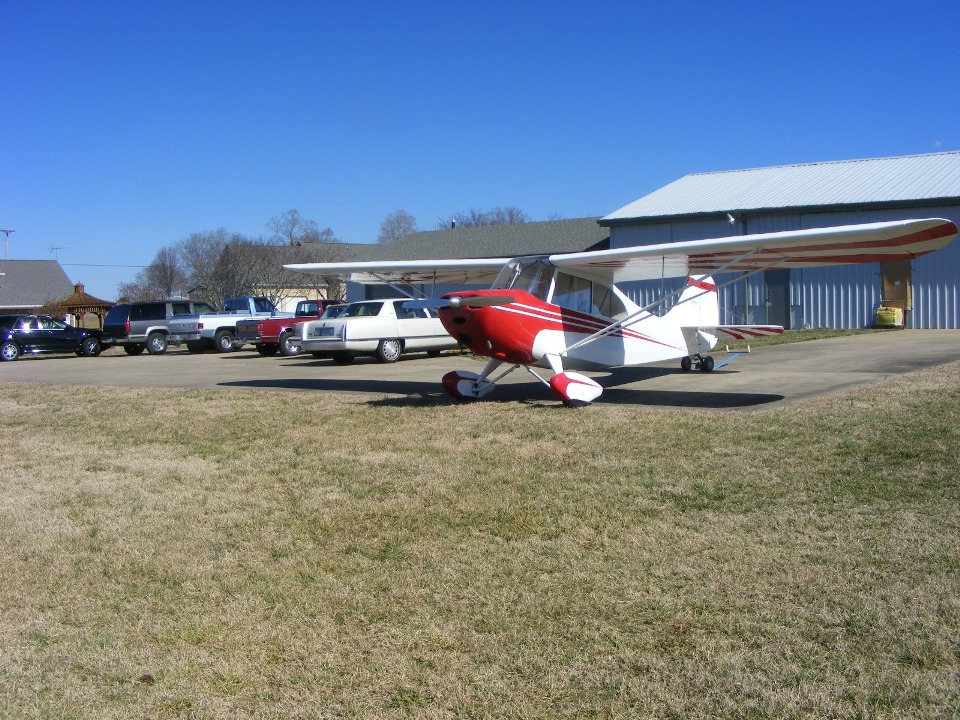 I helped Wendell roll up the plastic walls of the "paint booth" and secure the rolls to the rafters with bungee cords.  The corrugated metal panel was put back on the hangar door with my assistance.  It was around 4 PM when both airplanes were put back in the hangar.  The fuel I burned in the first flight chase was put back into my fuel tanks.  With 30 gallons of AVGAS aboard, I am ready for the next flying adventure.