July 14, 2003:  The RIGHT wing has joined the LEFT wing on the roll around storage cart for additional assembly work.  You can see the RIGHT aileron is hung on the hinges, but not connected to any linkages yet.  The RIGHT flap is also hanging down from its hinges out of the way for now.  I ended up parking the cart with both wings inside the wing construction jig cross arms for now. 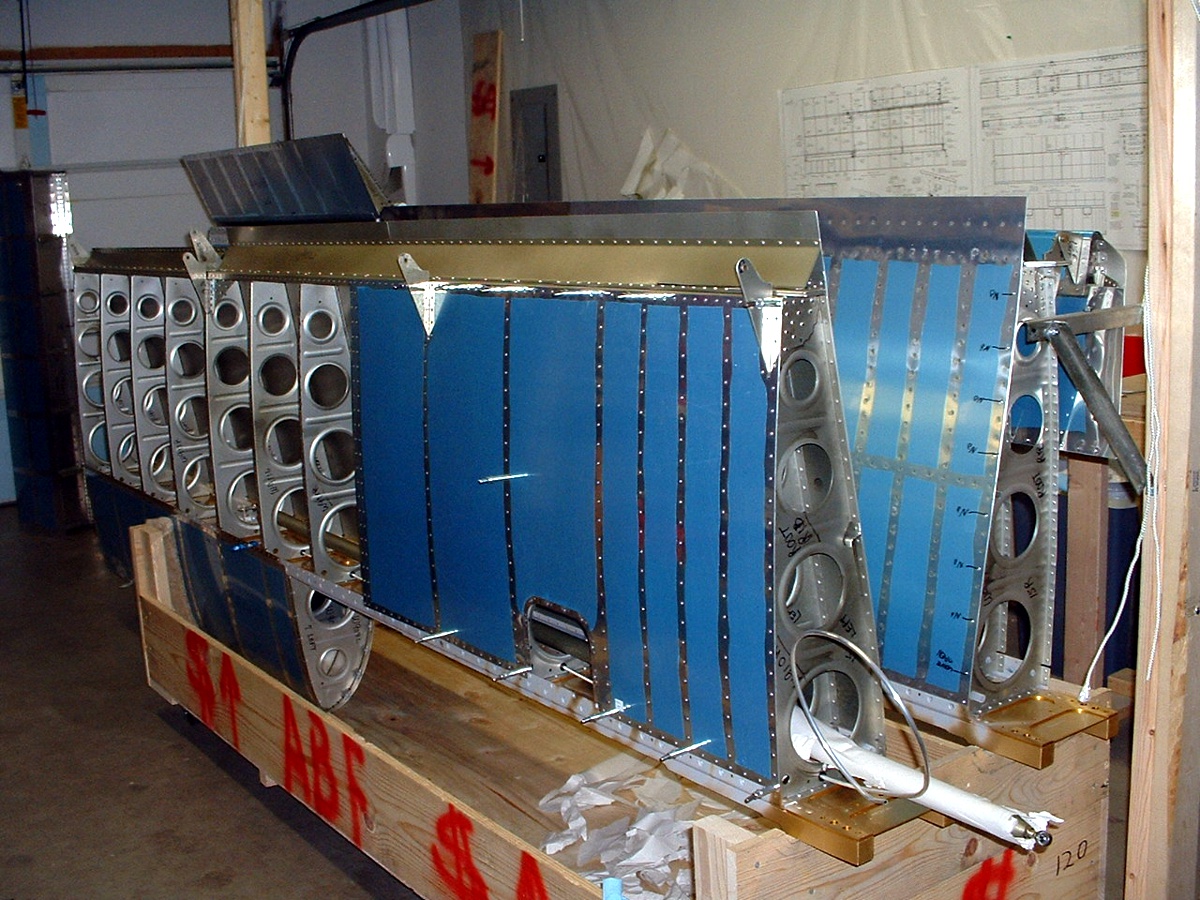 Here is a view of the fuel tanks, now with both of them completed to the curing stage for the Proseal inside and on the end plates. 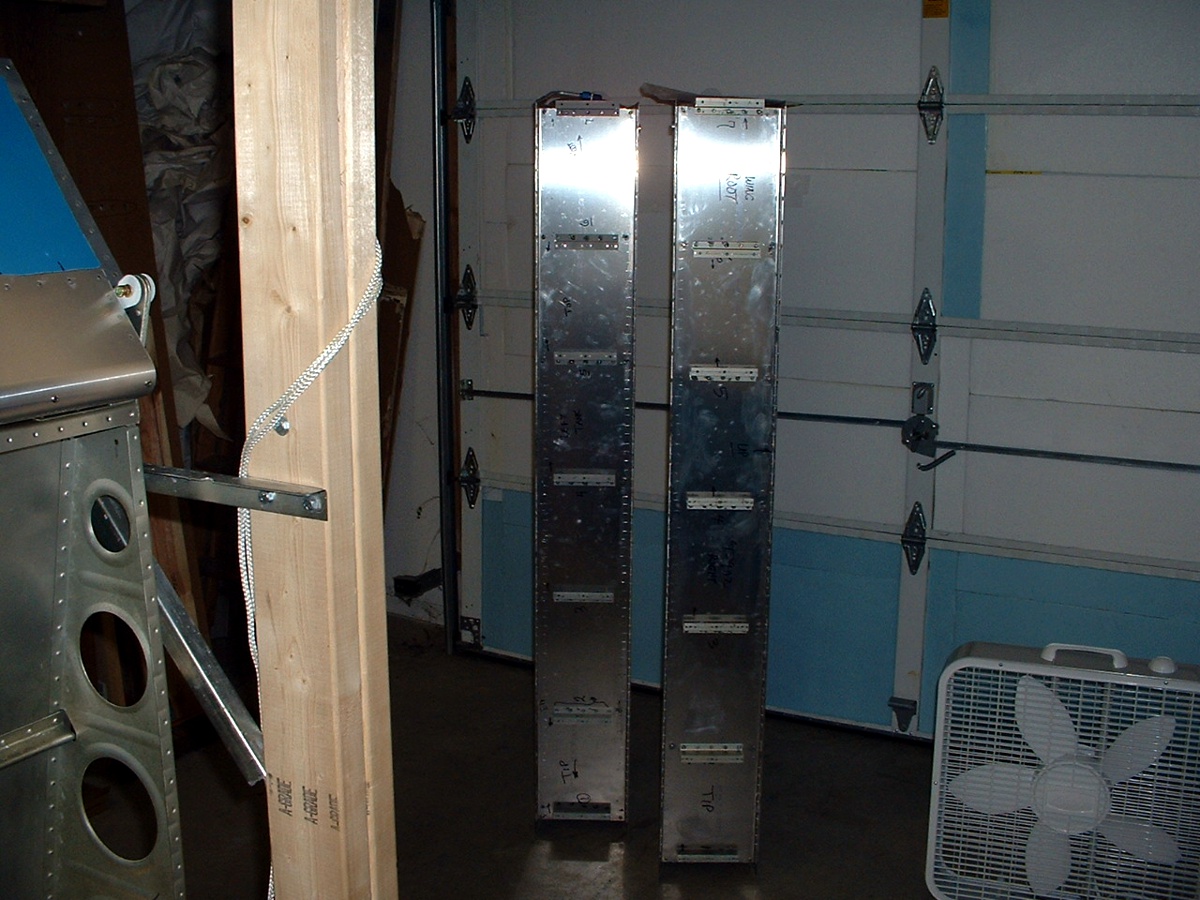 And a view of the wings from the other end and side.  It is time to install the aileron bellcrank assembly and the push rods. 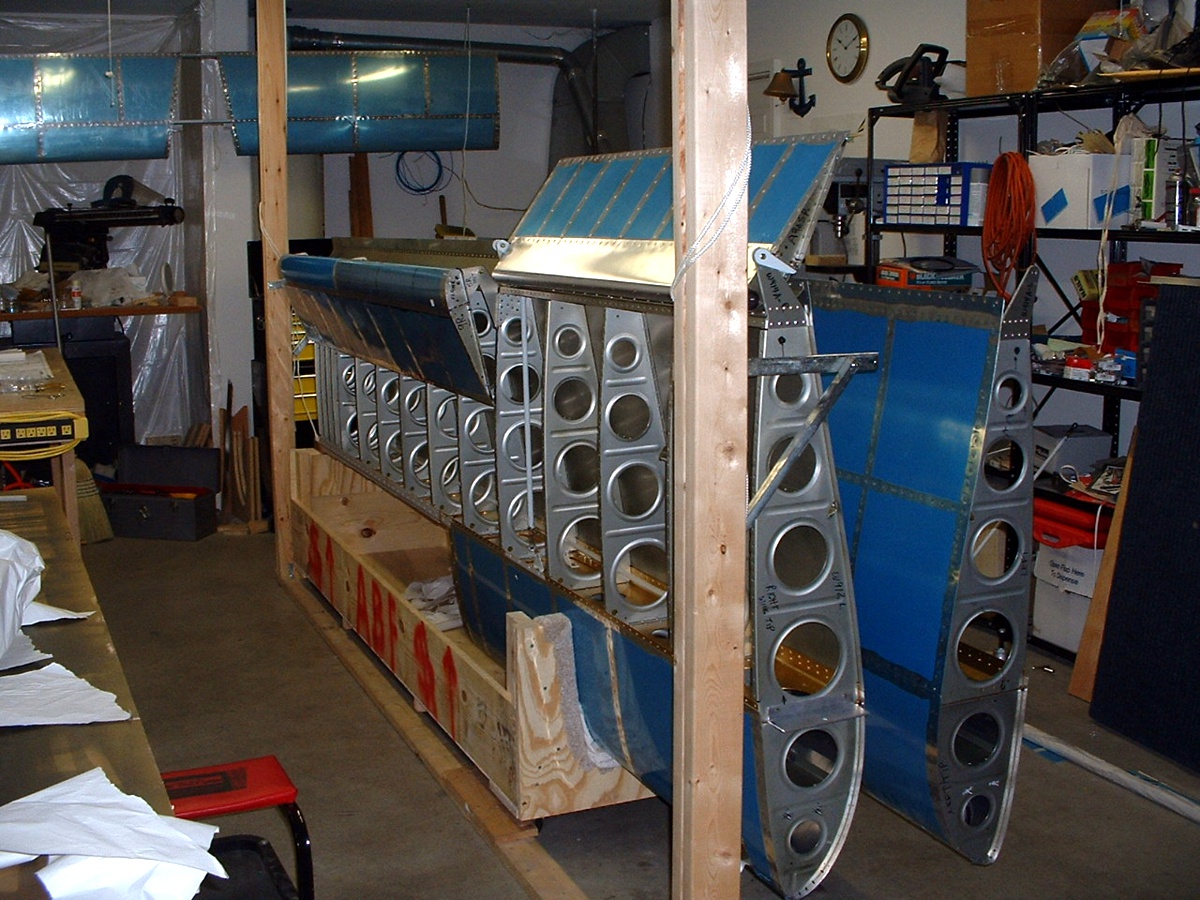 July 27, 2003:  I have been away on business travels, but I have managed to get in some serious time in the past two days.  I was also waiting for my local EAA advisor to stop by and inspect my wings before beginning the bottom wing skin closure process.  I have managed to rivet the inboard bottom skins onto both wings.  Here is the LEFT wing after riveting was completed.  I had to temporarily remove the pitot tube plumbing due to interference with the steel mounting rail of the wing construction jig.  I found that I could do this riveting by myself with the wing back up on the construction jig.  For those of you who know me -- there is the famous RED cup of ice water on the corner of my saw table. 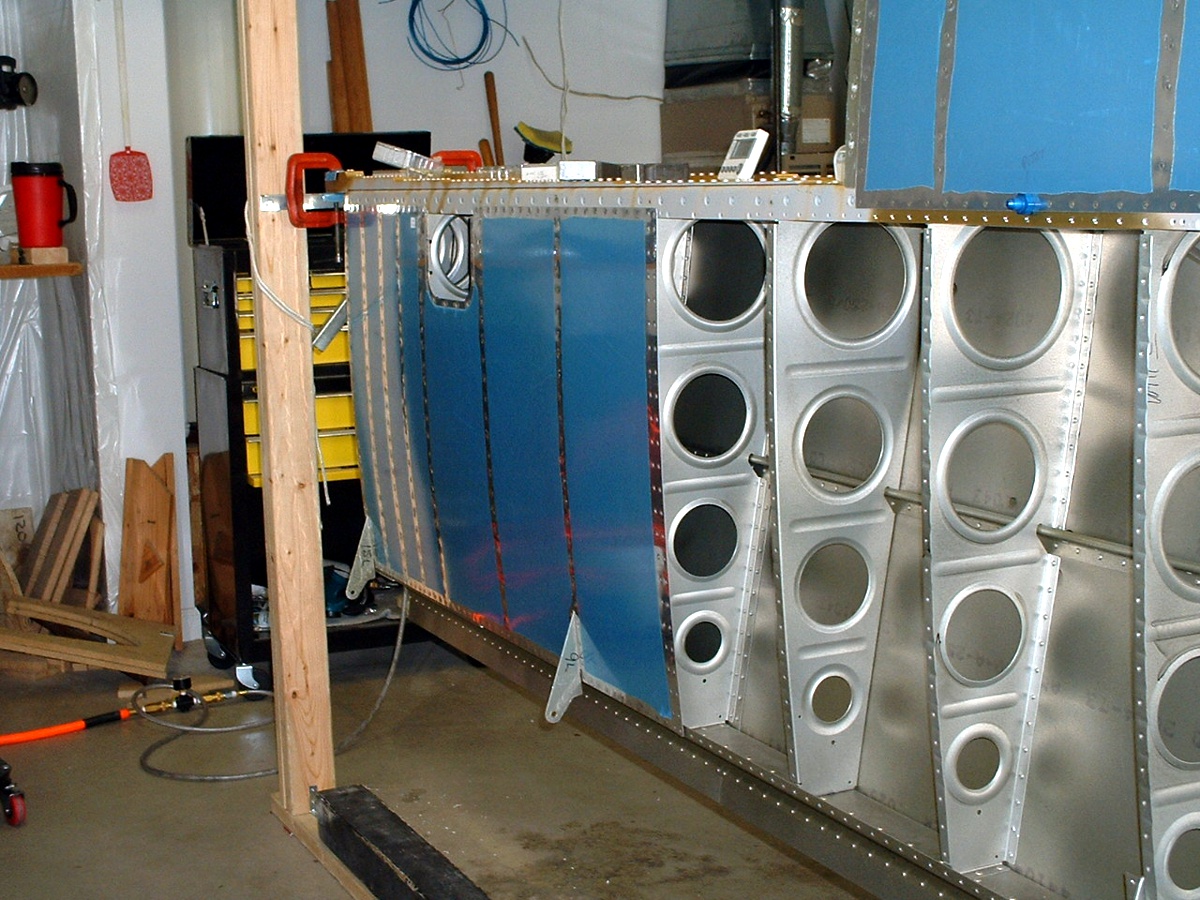 Here are two shots of the RIGHT wing.  The first photo shows the riveting starting from the rear spar and progressing up toward the main spar.  The second photo shows the riveting completed.  I will leave the larger outboard skin off until I finish wiring the lights and possibly putting in a wing leveler servo.  I have talked to other RV pilots who have put in the servo after their aircraft have been completed.  It can be done by removing one wing tip and accessing the aileron bellcrank via the inspection port. 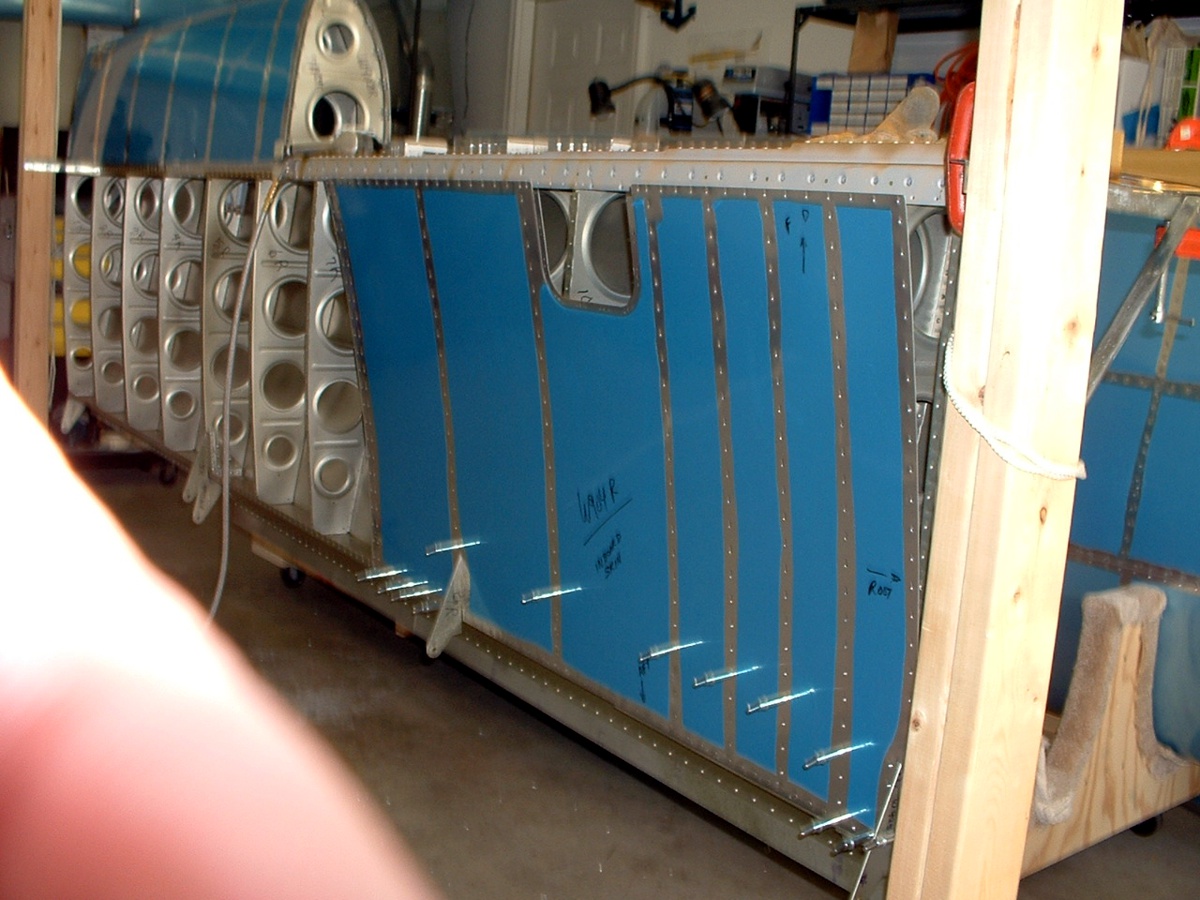 Since the smaller rib lightening holes near the rear wing spar are too small to put a hand inside the wing, Van's manual tells you to start the riveting from the rear, allowing you to put your arm inside the wing from the forward edge of the skin to buck the rivets.  ( I see my finger got into that shot.  Unfortunately, I just noticed it as I am posting this to the web and I cannot take the photo again.) 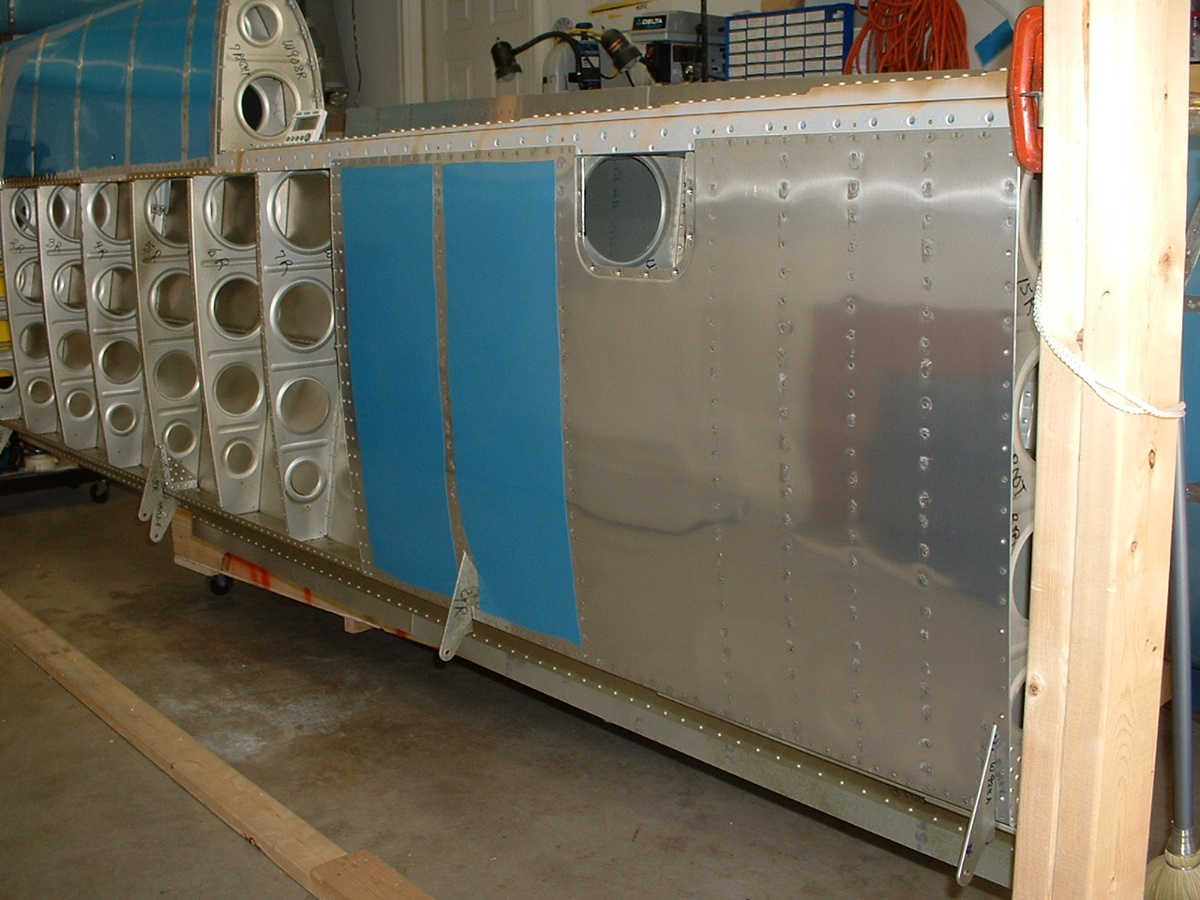 Some of the blue protective plastic was peeling off.  I stripped those pieces off the skin.  I had to also remove the large aileron push rods from both wings for this riveting process.  You can see a large rib lightening hole inside the wing inspection plate.  I needed to run my hand with a bucking bar in there to buck many of the rivets.

I also managed to "weigh" the wing assembly with my bathroom scales -- approximately 55 pounds.  I have already weighed the fuel tanks, flaps and ailerons and estimate the completed wing will come in around 80+ pounds without the fiberglass wing tips installed.  The nice part is that when it is time to install the wings on the fuselage, it is the 55 pounds portion that has to be lifted and installed into the wing spar carry-through section.  Everything else gets put on after the wing is attached.  Total construction time now stands at 531.8 hours.