July 31, 2003:  I called Van's Aircraft in Oregon today to check on my fuselage shipment.  The kit ships on Friday, August 1 according to Anne B.  I also purchased the Navaid Devices wing leveler/turn coordinator today.  I spent three hours figuring out how to mount the servo adjacent to the aileron bellcrank and fabricating a mounting plate for it.  There are some pictures below.  This is a work in progress which will require me to also make a bracket to interface at the bellcrank.  I have to decide on the amount of movement that is required to take the stick through full aileron deflection.   The interface linkage and the attachment points for it must not push the servo past its mechanical limits with full aileron movement. 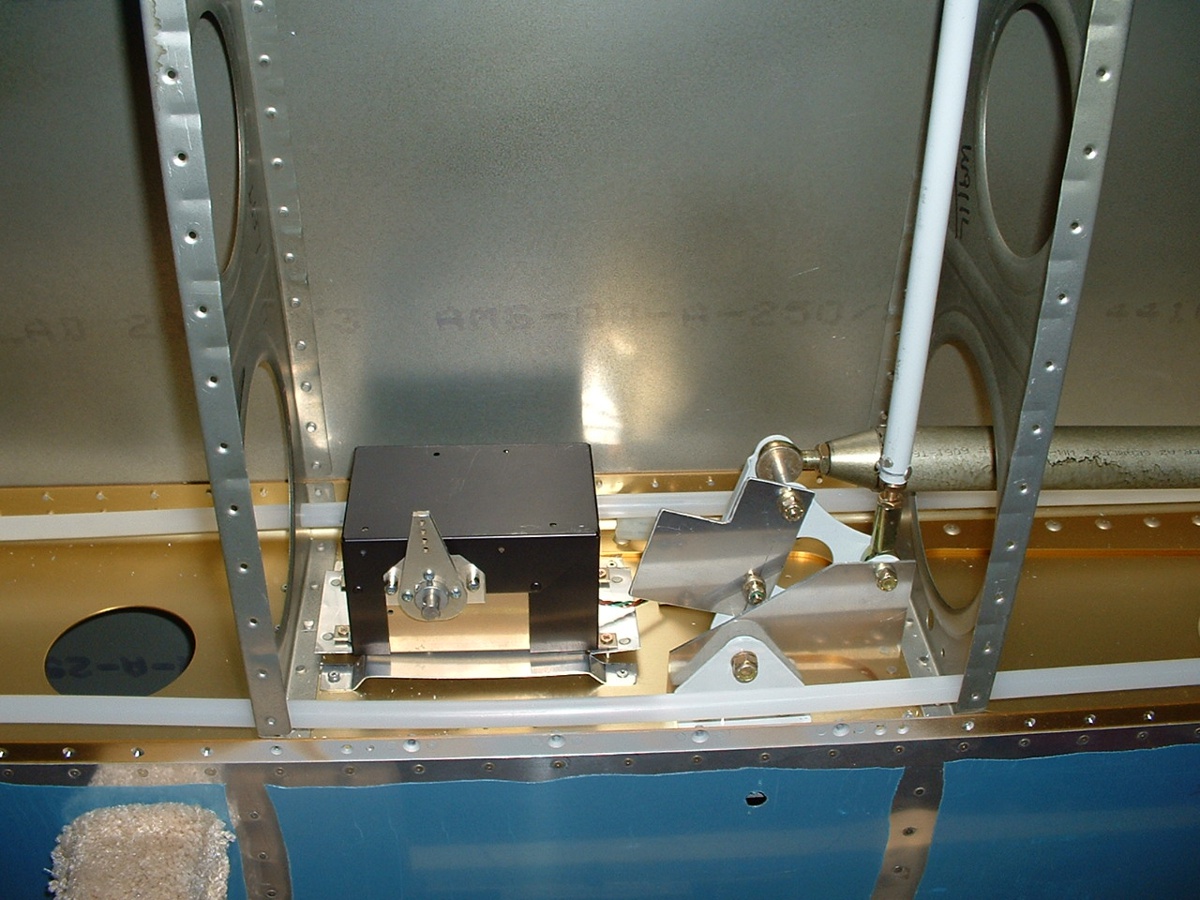 The servo mounting plate is riveted to the spar with four blind rivets.   There are four #6 plate nuts and screws holding the servo to the mounting plate. I have to finalize the shape of that interface plate that is attached to the aileron bellcrank with the two bolts and then attach the linkage between the servo arm and the interface plate.  I will cleco on the bottom skin and be sure I can work on this thing via the access plate.  And yes, that is the aileron calibration jig bolted in to verify the center of aileron movement.  Now that the servo is mounted, I will probably wait to complete the linkage attachment when the fuselage is ready to mount the wings and check on the aileron movement from the control stick in the cabin.

Below is the view from the end of the wing showing the aileron attached to the LEFT wing again for this trial fit of the wing leveler servo.  The servo is the black object visible through the large lightening hole in the fourth rib from this end.  The gray steel rod running vertically is attached to the bellcrank and the aileron hinge assembly.  You can also see the large aileron push-rod that runs from the bellcrank toward the fuselage passing through all the other large rib lightening holes. 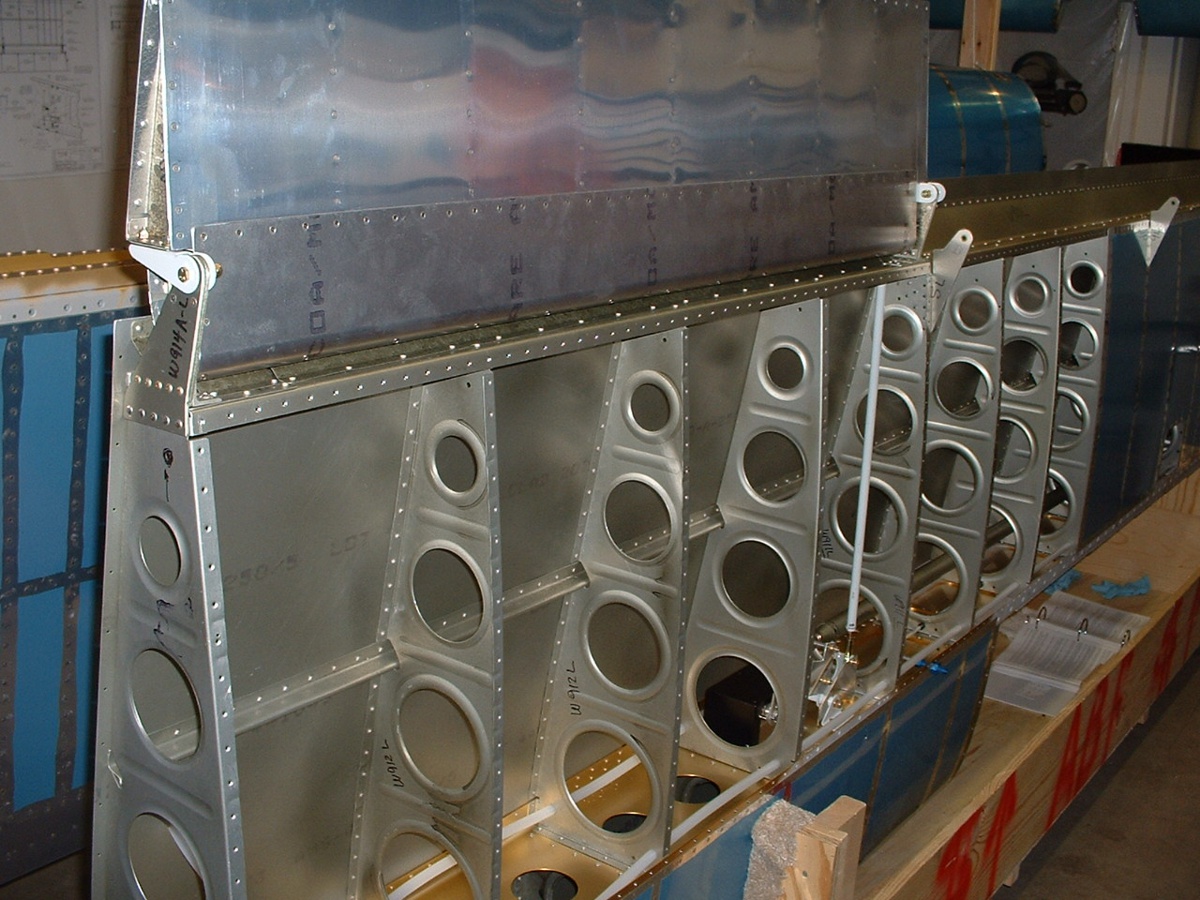 August 3, 2003:  I went over to the Huntsville, Alabama area to work with my friend David Edgemon on my fuel tanks.  He showed me a safe and easy way to pressure test the tanks without the possibility of any damage to them.  The RIGHT fuel tank was fine, but the LEFT tank had a leak in the corner at the fuel filler end of the rear baffle plate.   Some sealant was applied by reaching inside the tank filler neck with a bent brush to put the sealant in the correct place filling the hole.  David managed to get this picture without my knowledge while I was putting the end plates on the fuel tanks before the pressure testing. 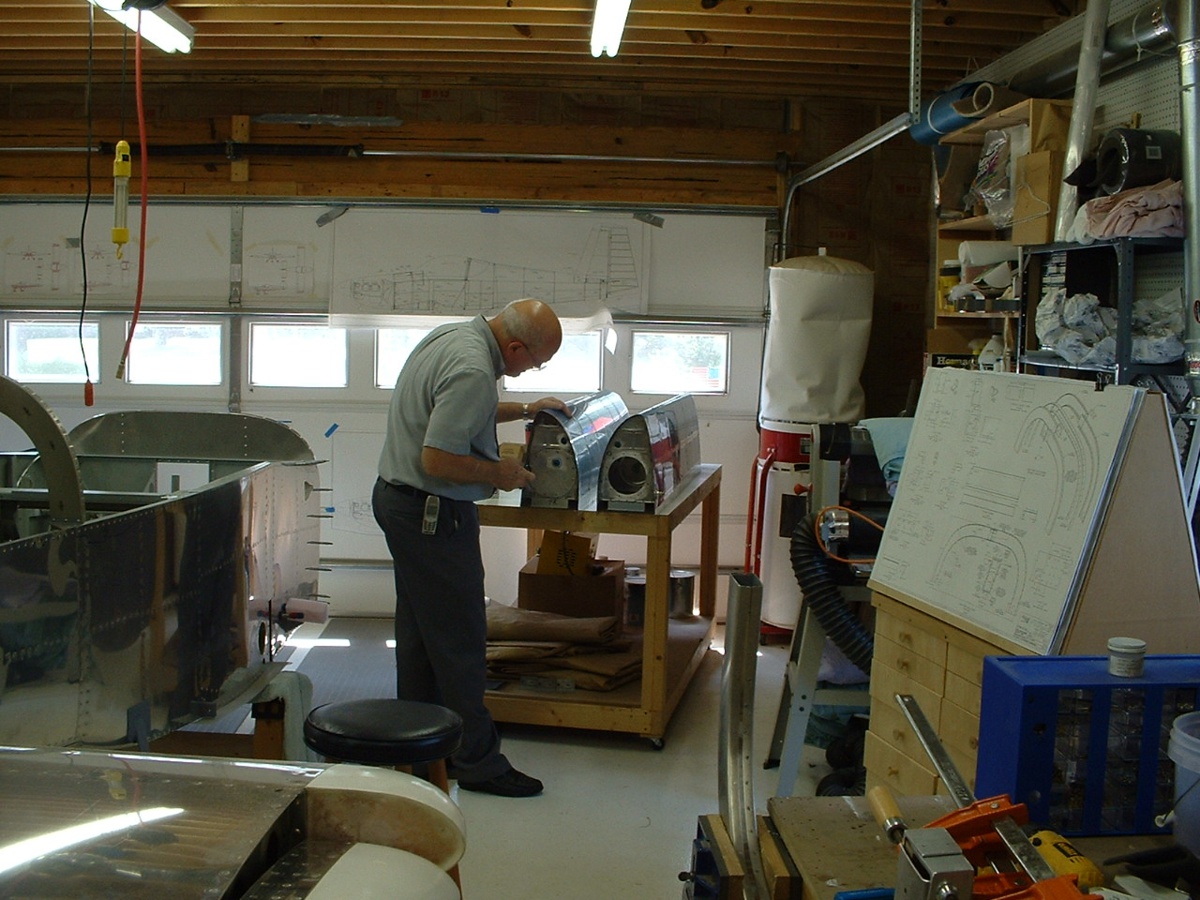 You can see the forward part of his RV-9 fuselage in the left center of this picture.  The tip of the horizontal stabilizer and the tip of the RIGHT elevator are visible in the bottom left corner of the photo.

Here are some pictures of David's RV-9A.  The elevator push rod is connected from the control sticks to the elevator.  He has just rigged the rudder cables to the rudder control arms.  You can see he has the pilot's seat temporarily installed with some cushions. 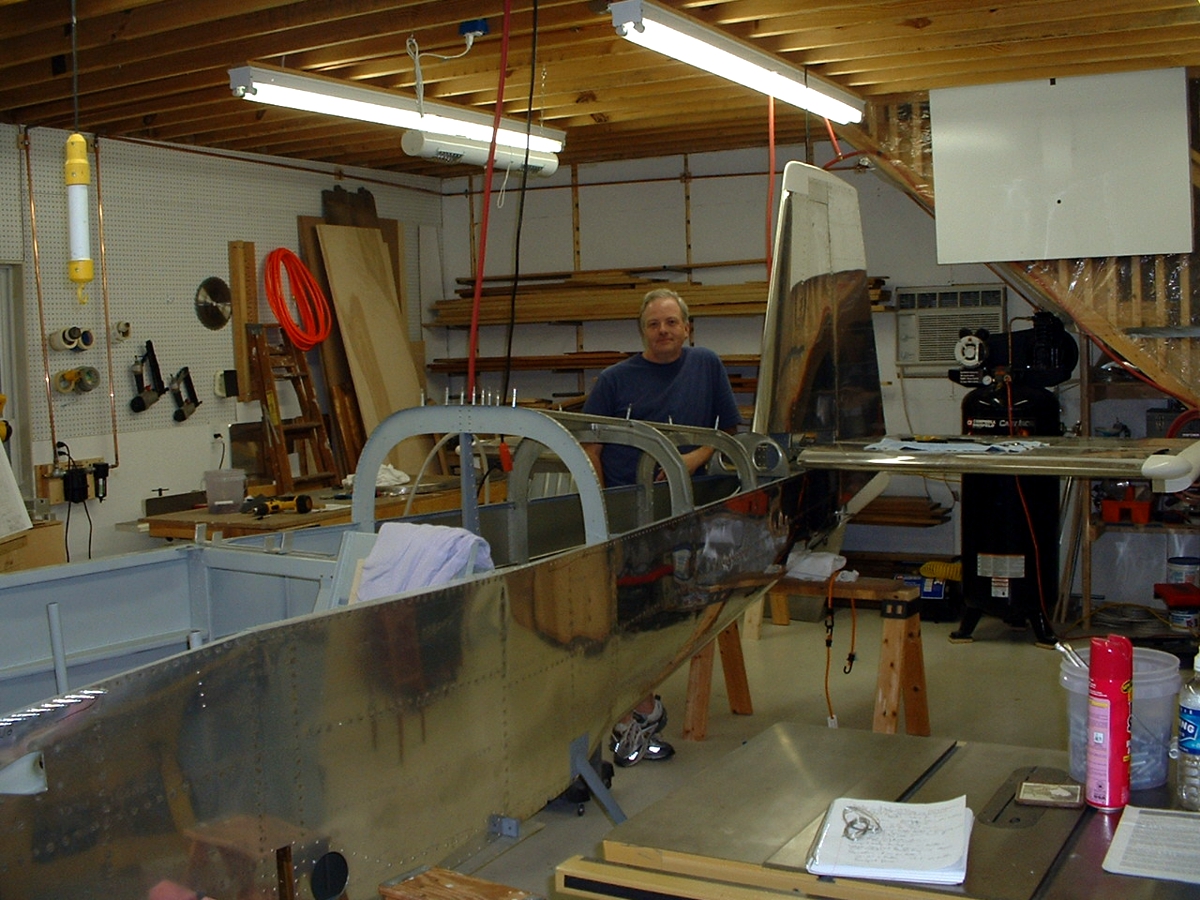 Here is the elevator trim control cable and the fuel tank selector handle in David's fuselage.  It is mounted to the wing spar carry-through assembly.  The large aluminum tube on the floor is the fuel line going to the electric fuel pump.  The two smaller tubes are brake lines. 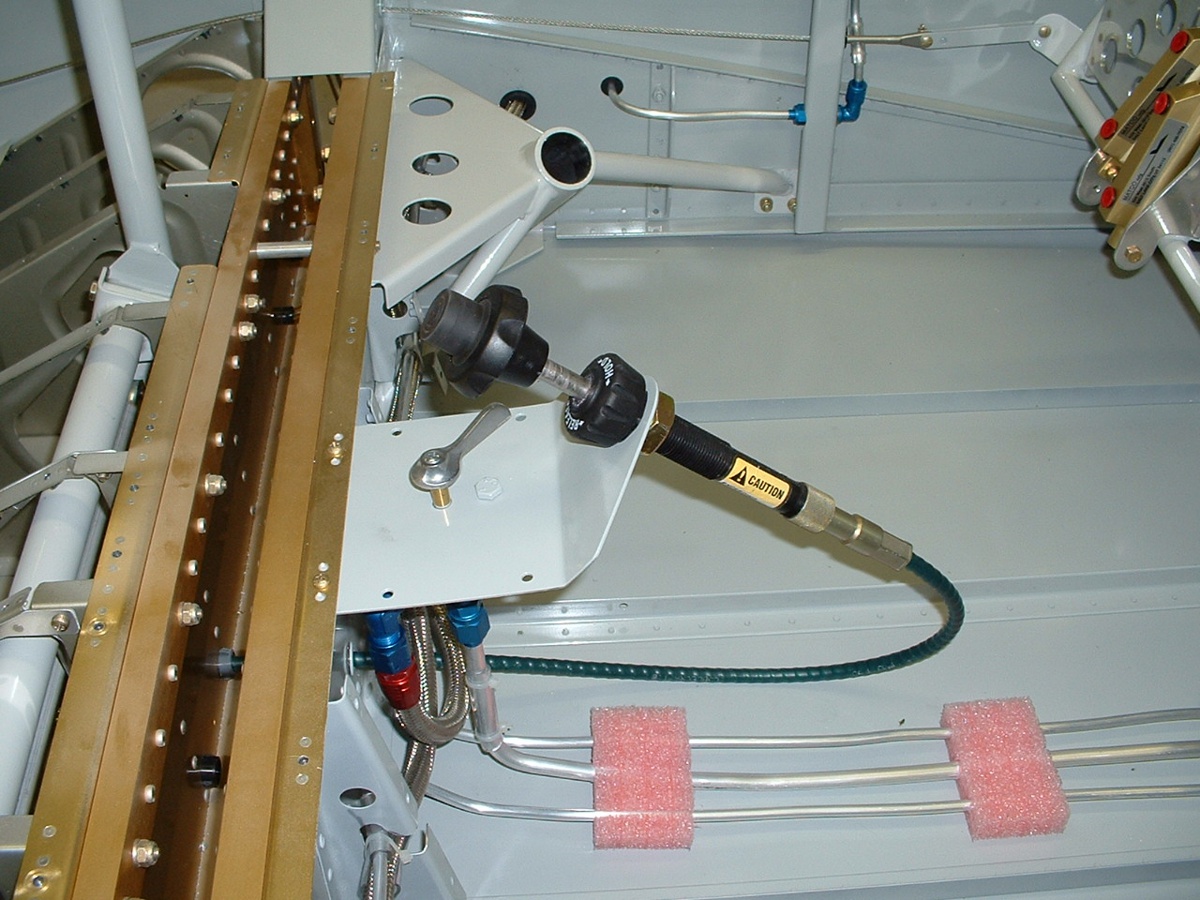 Here is the flap actuator and the steel control rod that connects to both flaps.  That lever between the control sticks is the manual aileron trim control with its springs connected to the aileron control linkage. 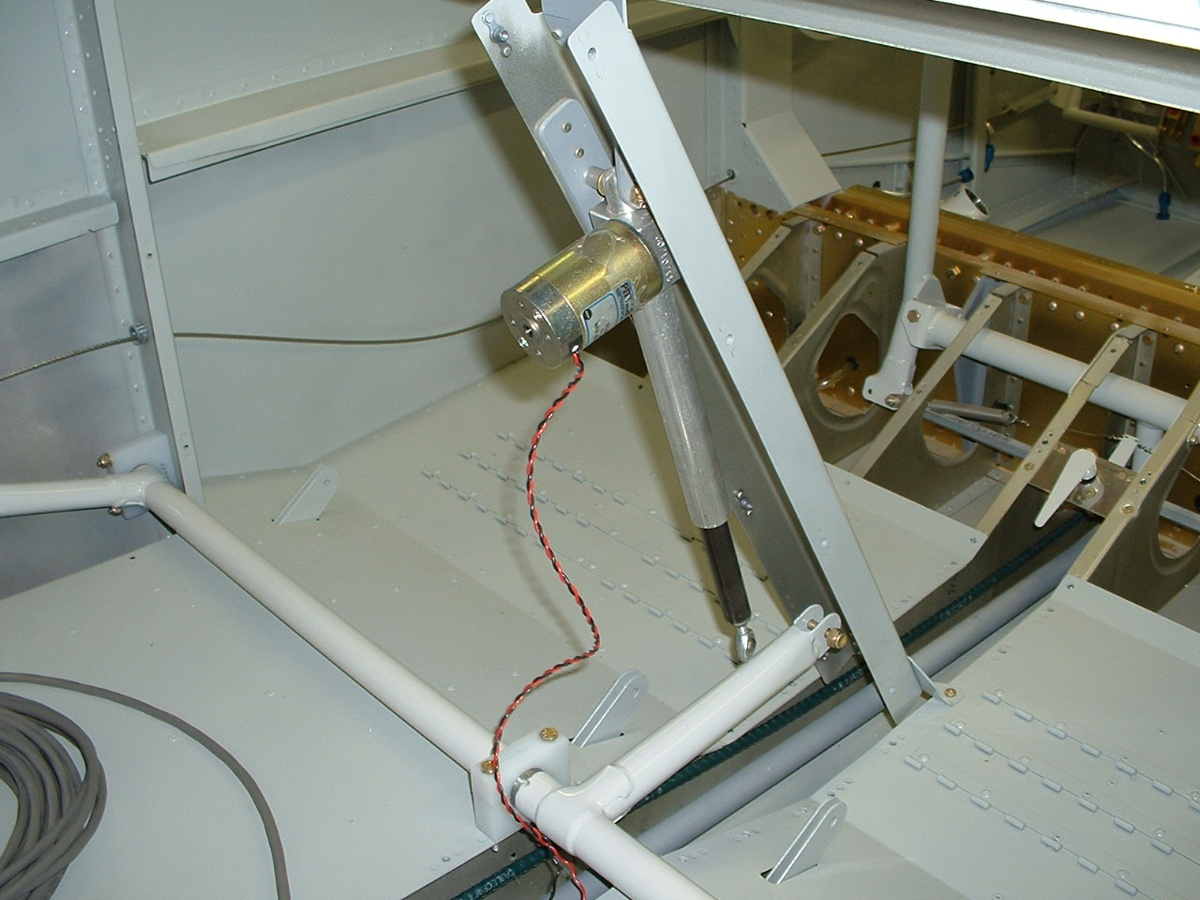 August 4, 2003:  No pictures today, but good news from Barb at Van's Aircraft -- the fuselage shipped today from their facility via ABF motor freight.  I managed to find a second leak in the LEFT fuel tank and will be sealing that one and the end plates and cork gaskets in my next session.  I also spent 1.5 hours today putting the fiberglass tips on both elevators.  Total aircraft construction time now stands at 551.3 hours.