February 3, 2018:  Another overcast day with low ceilings at the Rockledge Airport and a good visit with Bill, but no flying again.

February 6, 2018:  SPACEX launched the Falcon Heavy rocket today.  My home is about 40 miles south of the Kennedy Space Center launch pad 39 where the rocket was launched this afternoon.  Here is the view looking north from the east side of my house. 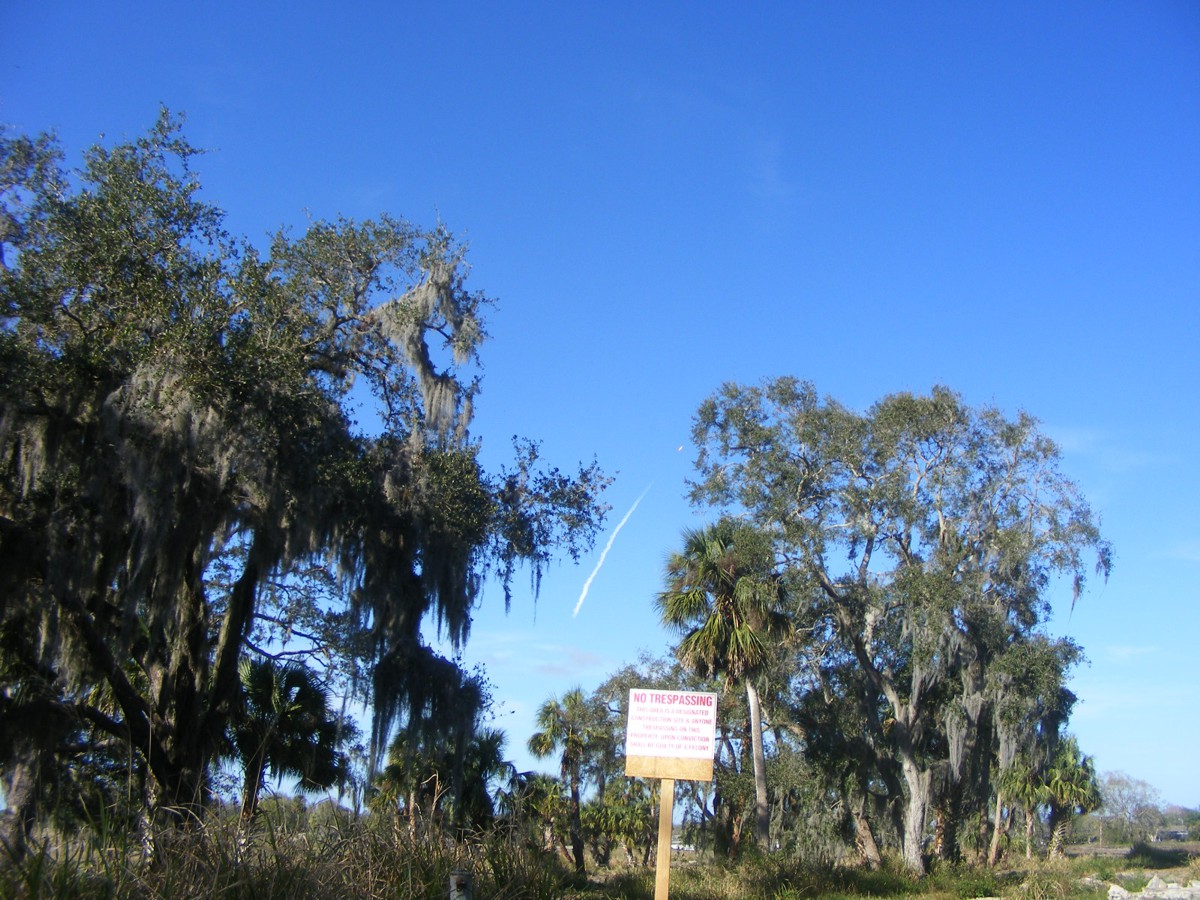 Here is the center part of the image enhanced.  The combined flames from the 27 rocket engines are clearly visible. 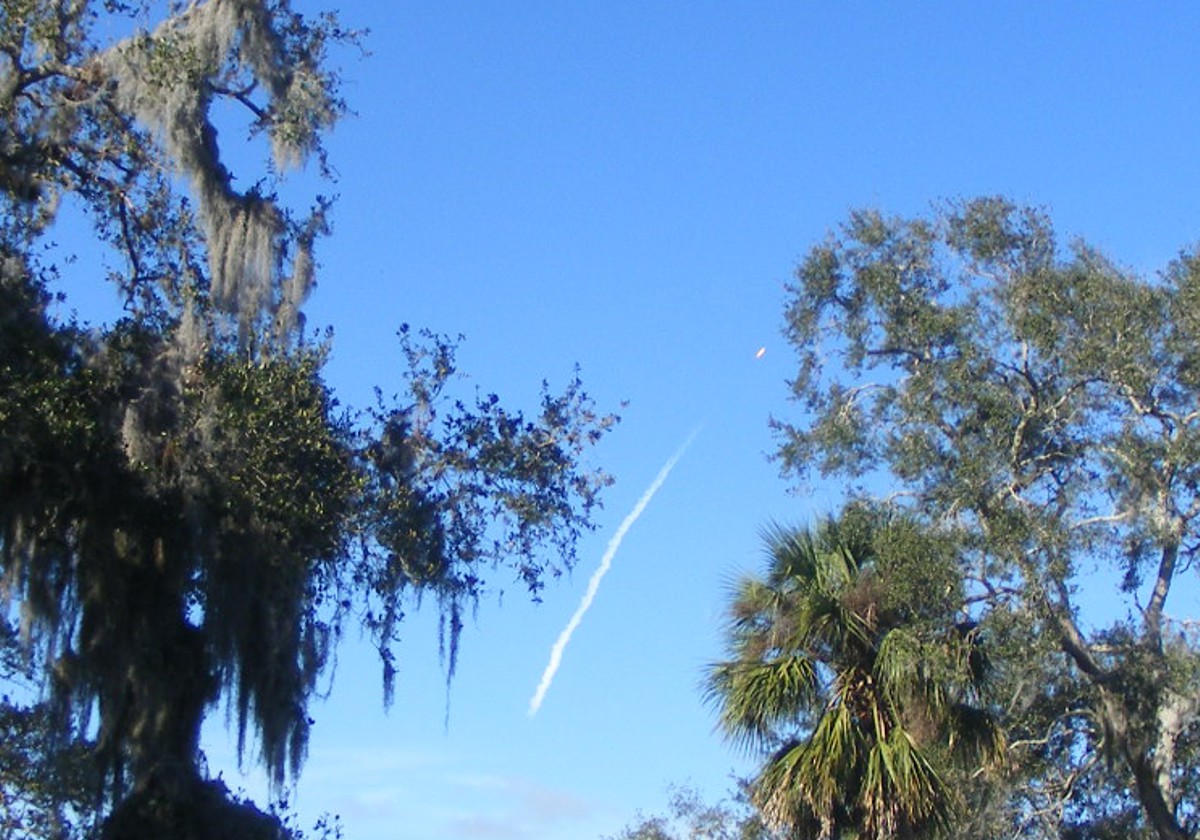 I got this second image in focus before the rocket flew out of sight using the zoom lens feature on my camera. 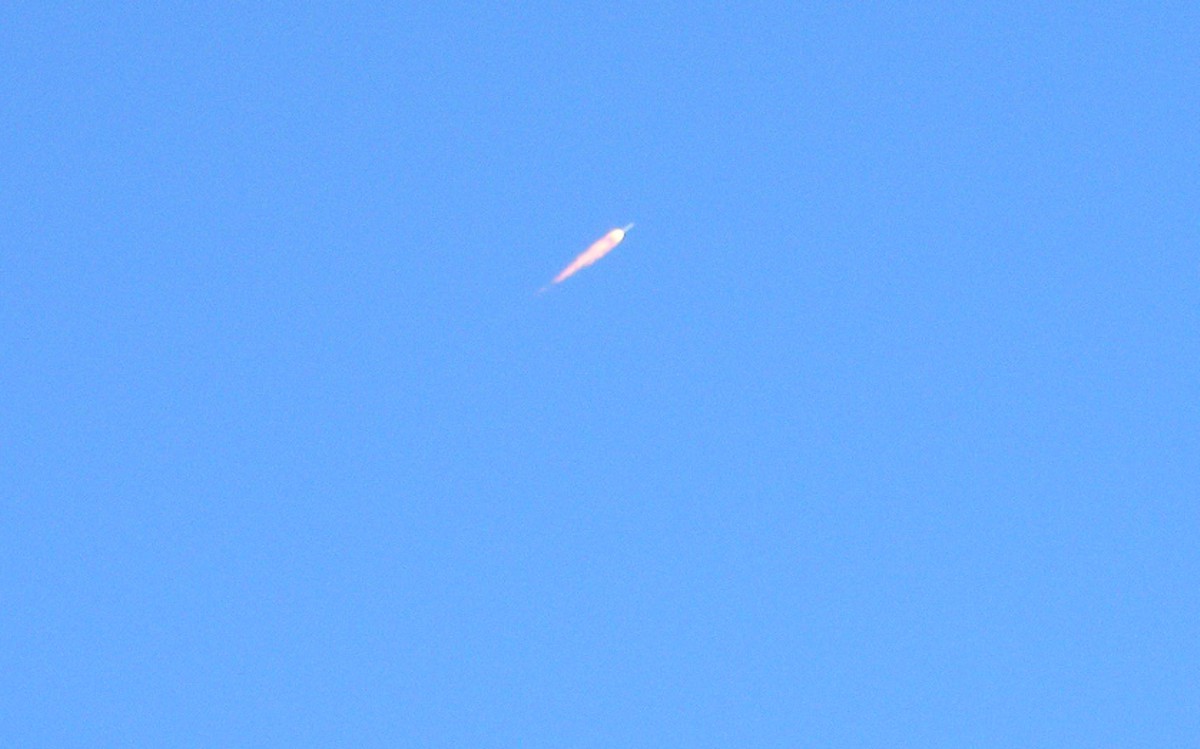 This is the center of the image above magnified. 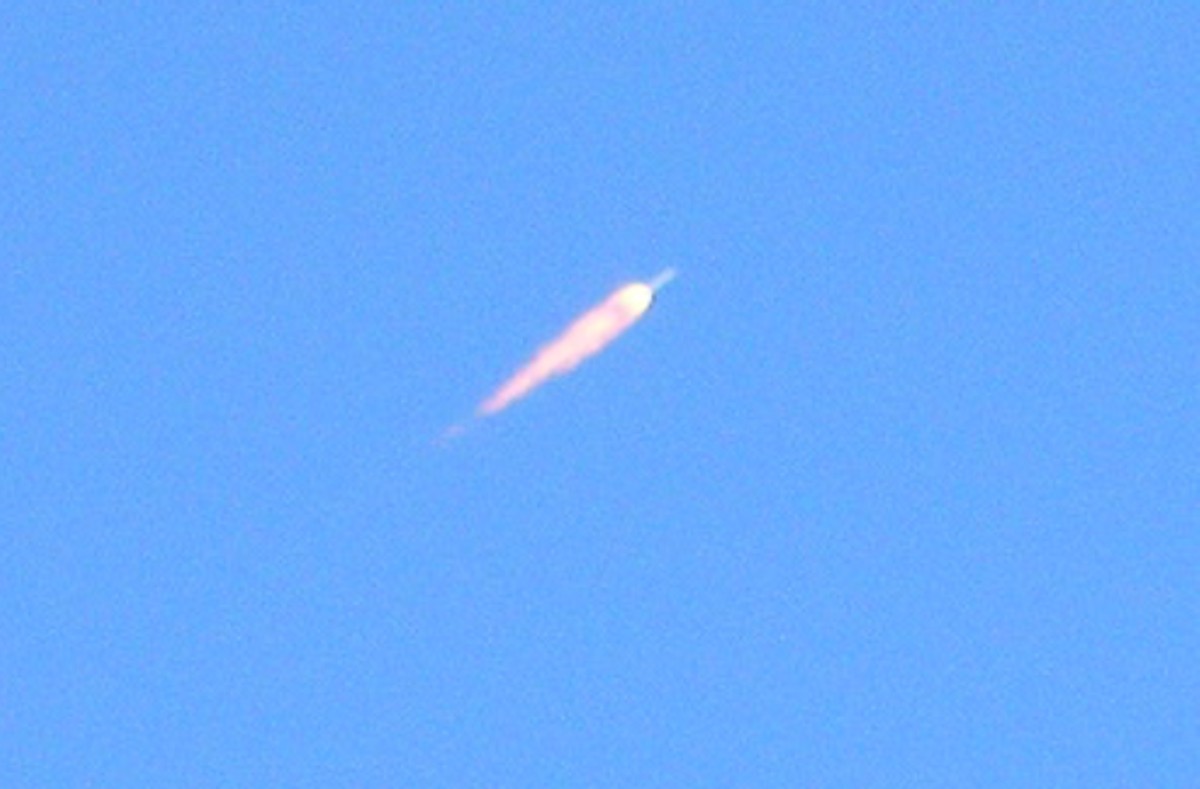 My last image is when the rocket is almost out of sight.  All you can see here is the rocket exhaust. 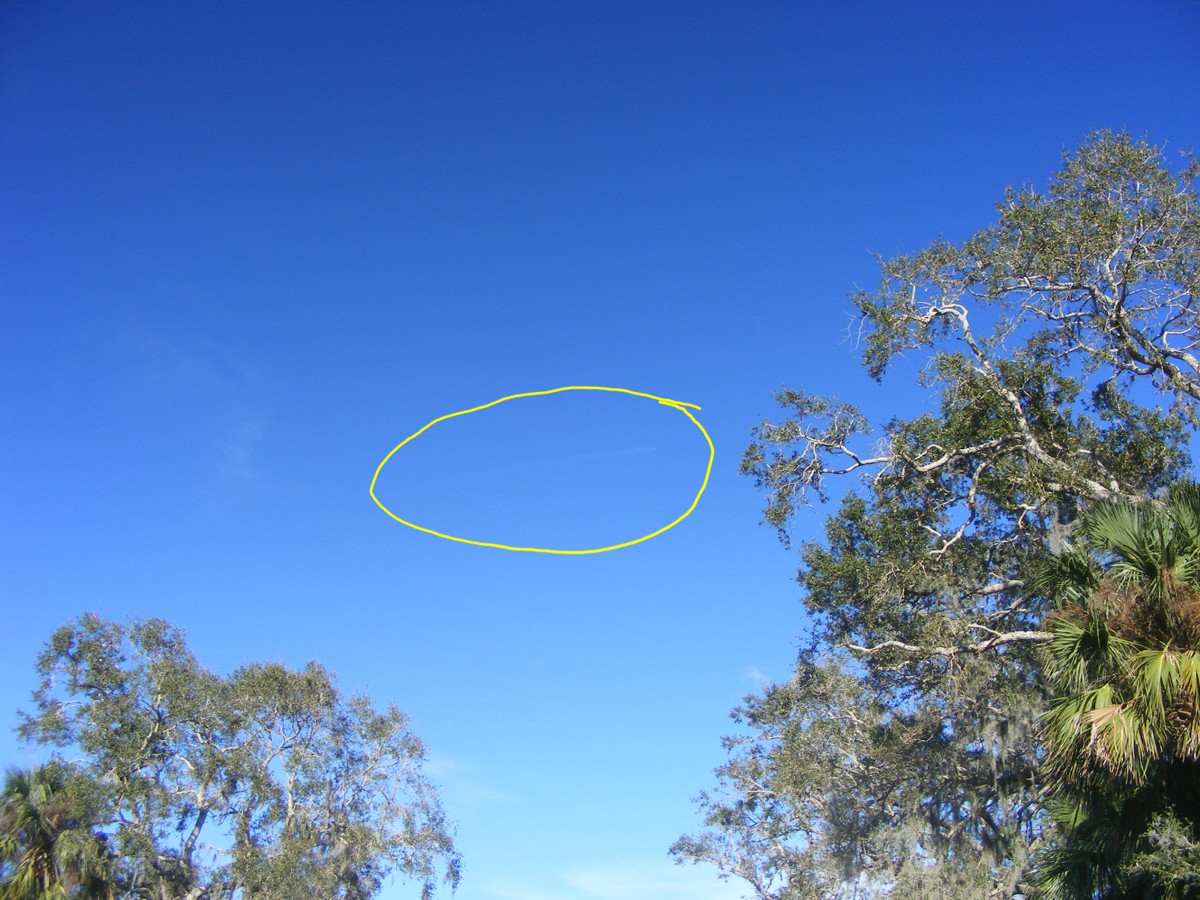 Again, this image is the enhanced center of the photo above.  The white "DOT" is the rocket engine from the center stage. 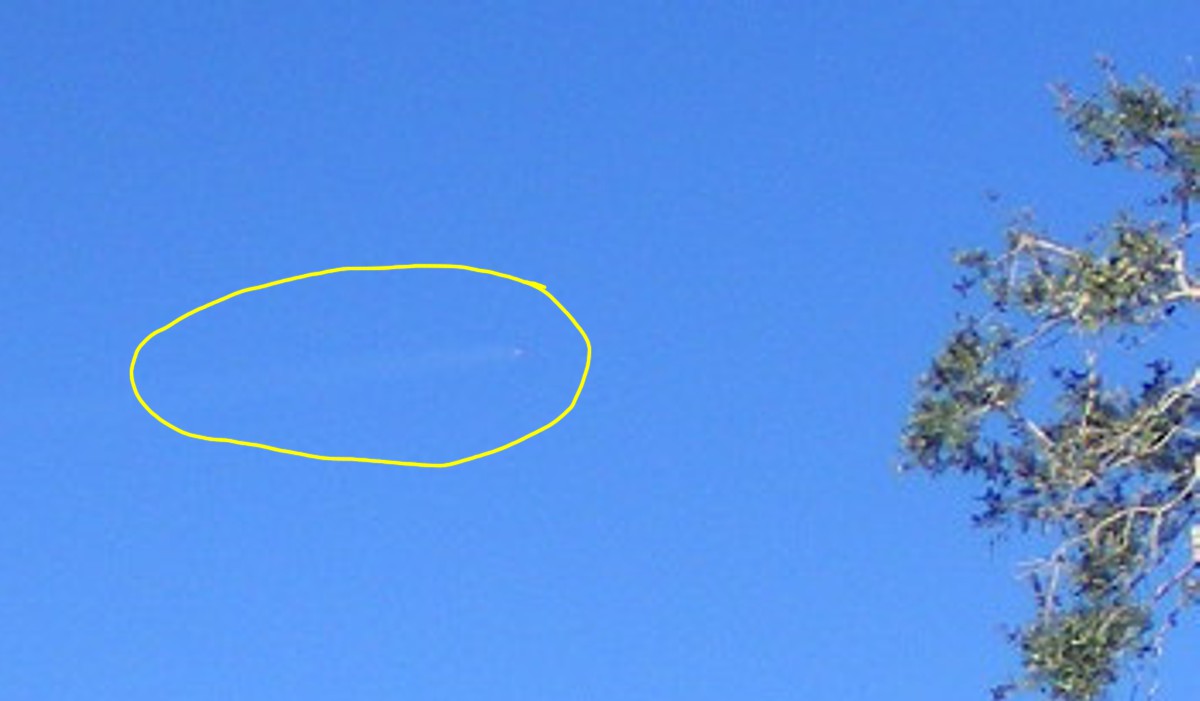 No flying for me today.  There is always next week.

February 10, 2018:  This Saturday was a day with broken to scattered clouds with winds from the south at ground level.  The takeoff from Rockledge was to the south of course.  As I climbed above 1000 feet MSL, the Dynon unit indicated the wind was about 15 MPH.  When I turned on course to fly north above the Indian River, the winds were at 23 MPH at 2,800 feet.  I wanted to be above the Titusville Executive Airport Class D airspace, and staying over the river kept me clear of the skydivers dropping in at the Dunn Airpark north of Titusville.  I noticed a couple of parachutes opening below and to the left ahead of my location.  I made some measurements using my GPS ground track which was 1.5 miles east of the airport. Looking at my slant range, my best estimate was about three miles from my airplane to the field when I first noticed the jumpers under canopies. 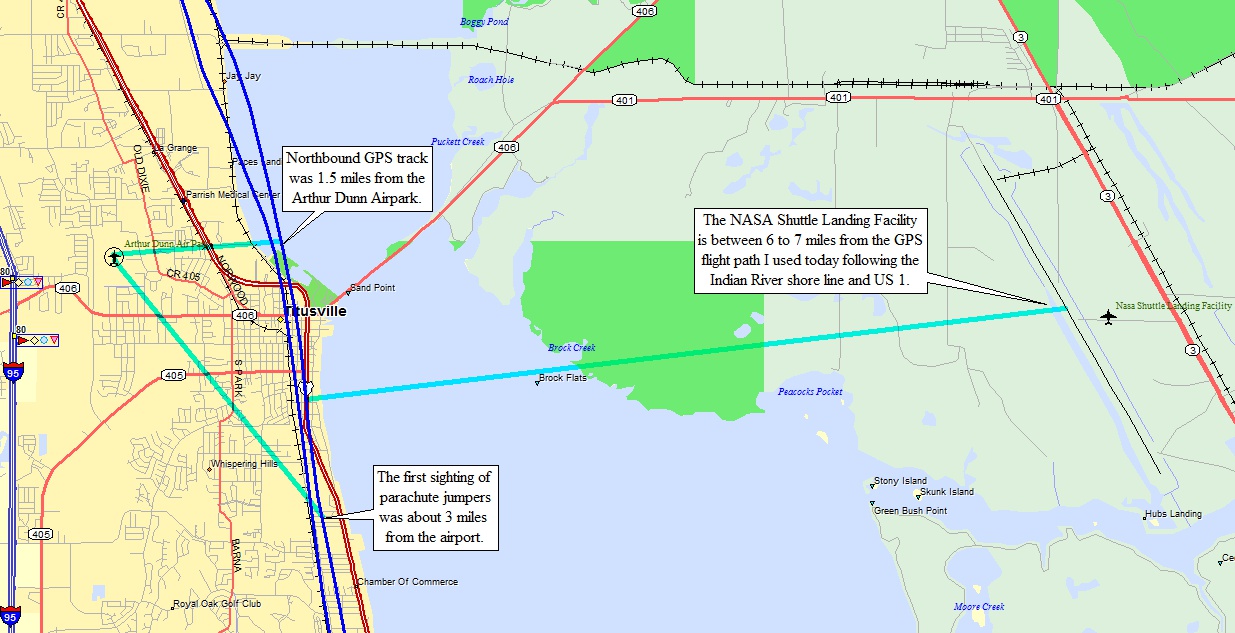 I climbed up to 6,500 MSL to get above the clouds building up away from the coast line.  The clouds are usually broken to scattered near Umatilla where I buy fuel.  The price went from $3.65 to $3.75 since my last fuel purchase at Umatilla (X23).

When I departed for home, I stayed below the clouds at 2,500 to 2,800 MSL.  It was bumpy below the clouds.  Holding the camera still was tricky.  The autopilot would keep me on my heading long enough to snap some pictures. 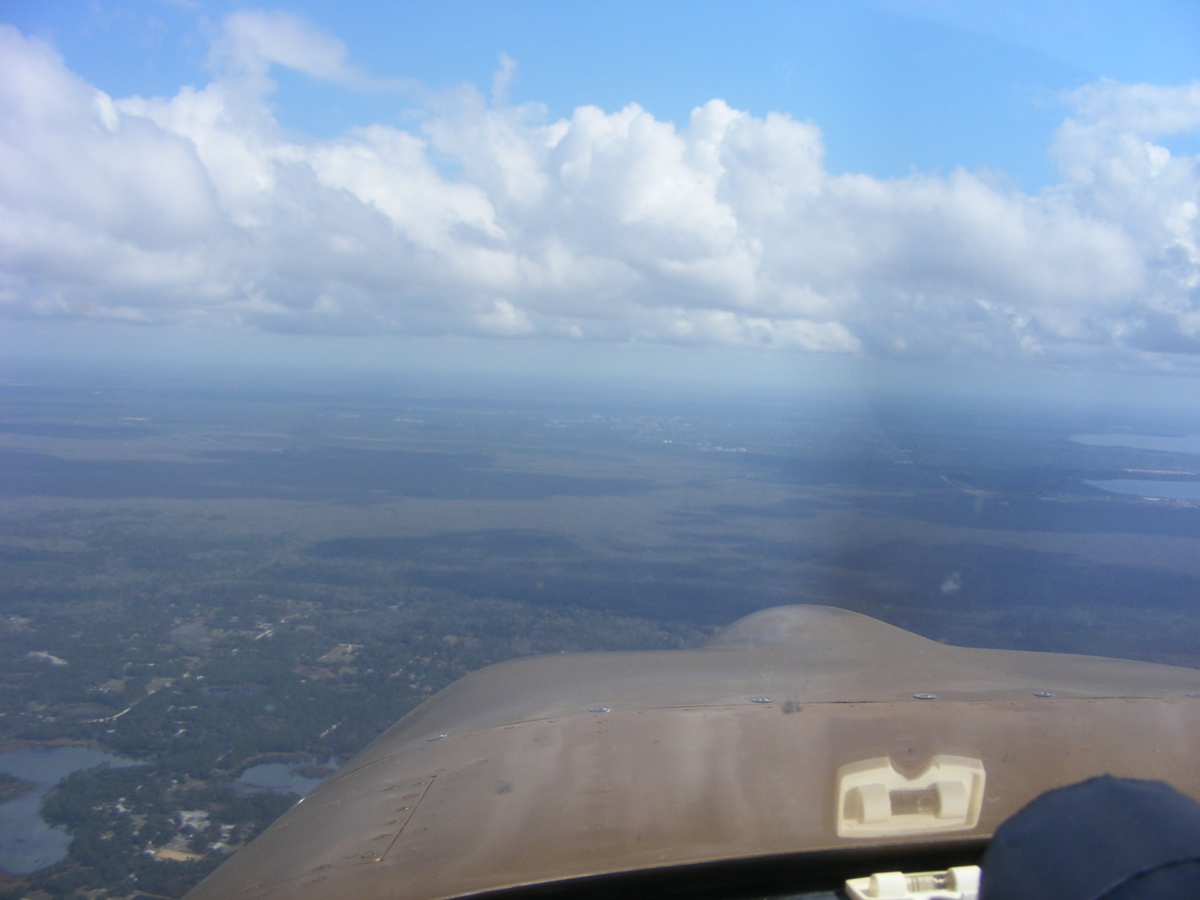 Turning the camera a bit to the right reveals Lake Monroe which is just north of Sanford, Florida.  The Sanford Airport is Class C below the larger Orlando Class B air space.  Either way, I go around these areas to make life easier. 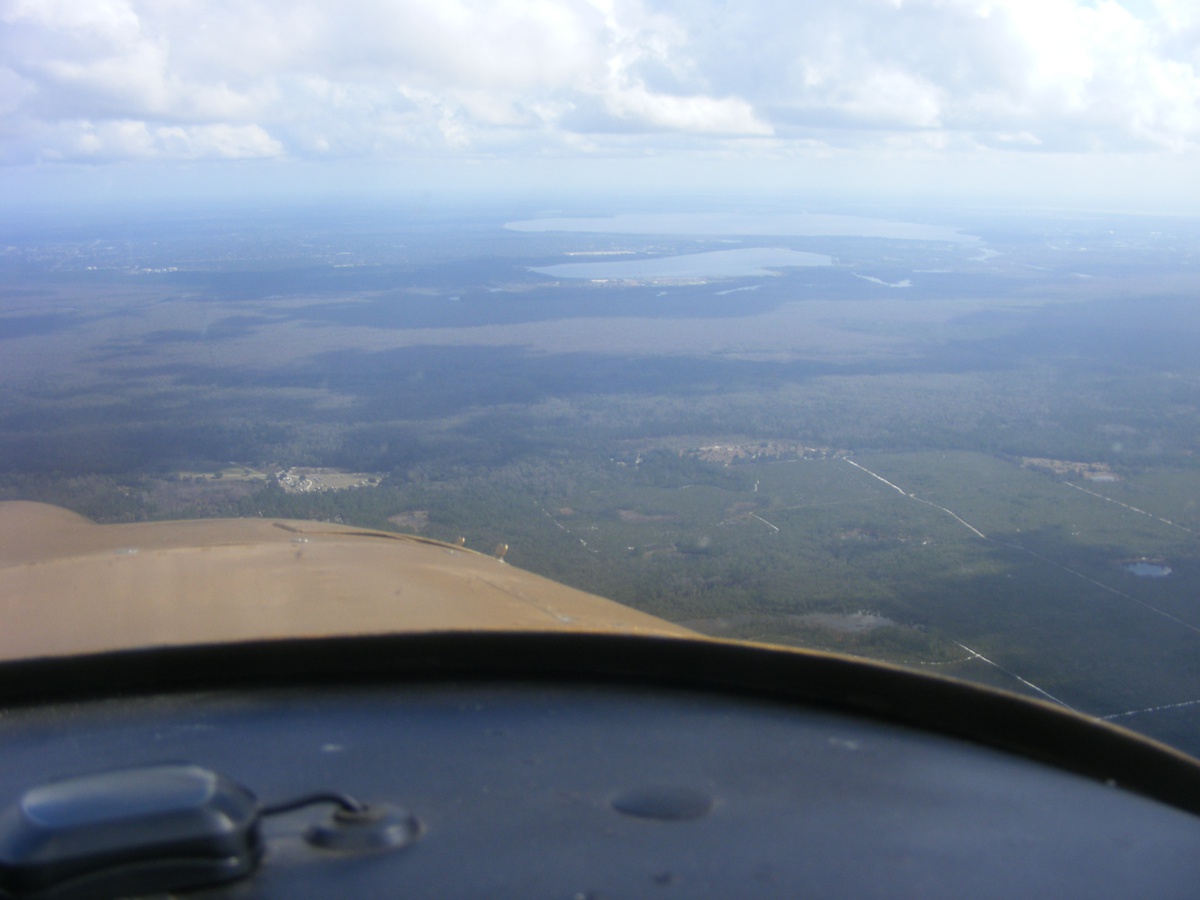 There is still a lot of open country below the airplane.  This area in view is east of the restricted area of the gunnery range southeast and east of Ocala in the Ocala National Forest.  That two-lane highway near the end of my wing and heading to the northeast is Florida state route 44 going up to Deland, Florida.  That dark green area in the shadow of a cloud is the Saint John's River winding northward. 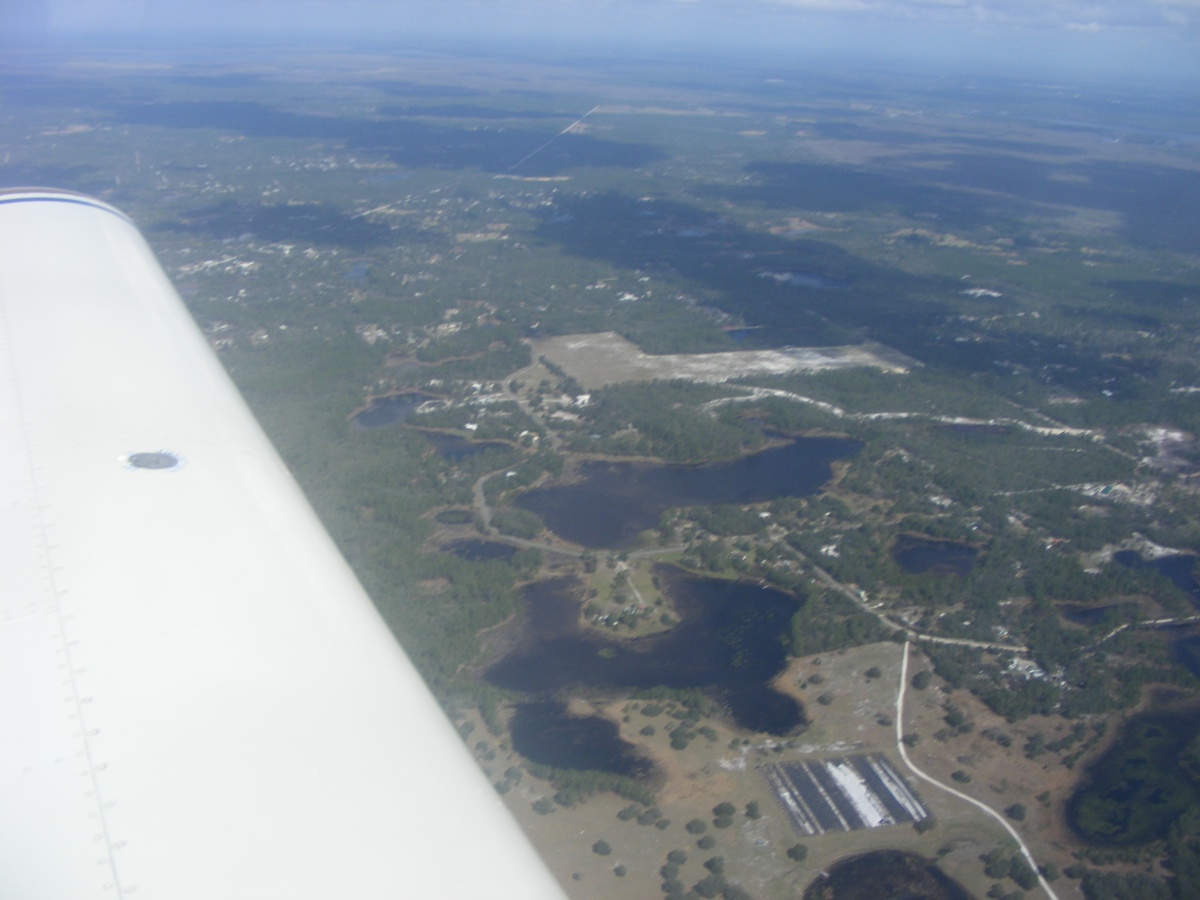 In case you are wondering about the camera angle here, I said it was bumpy.  I decided to leave this raw photo here to make the point.  The leading edge of my left wing is at the bottom left corner of the photo. 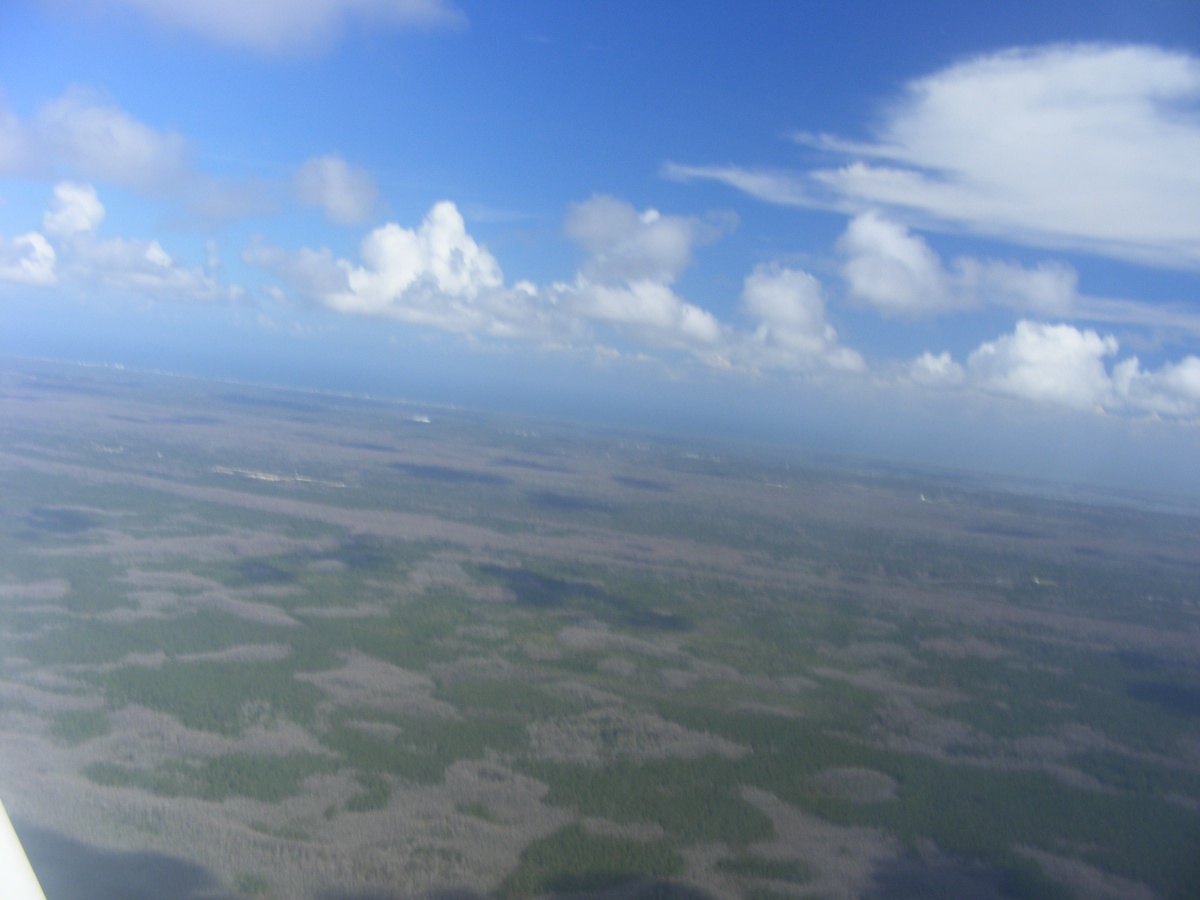 Dixie Way is that white street down there close to the bottom of the photo and is probably part of the old Dixie Highway.  The clear path near the Indian River is the right of way and tracks for the Florida East Coast railroad. 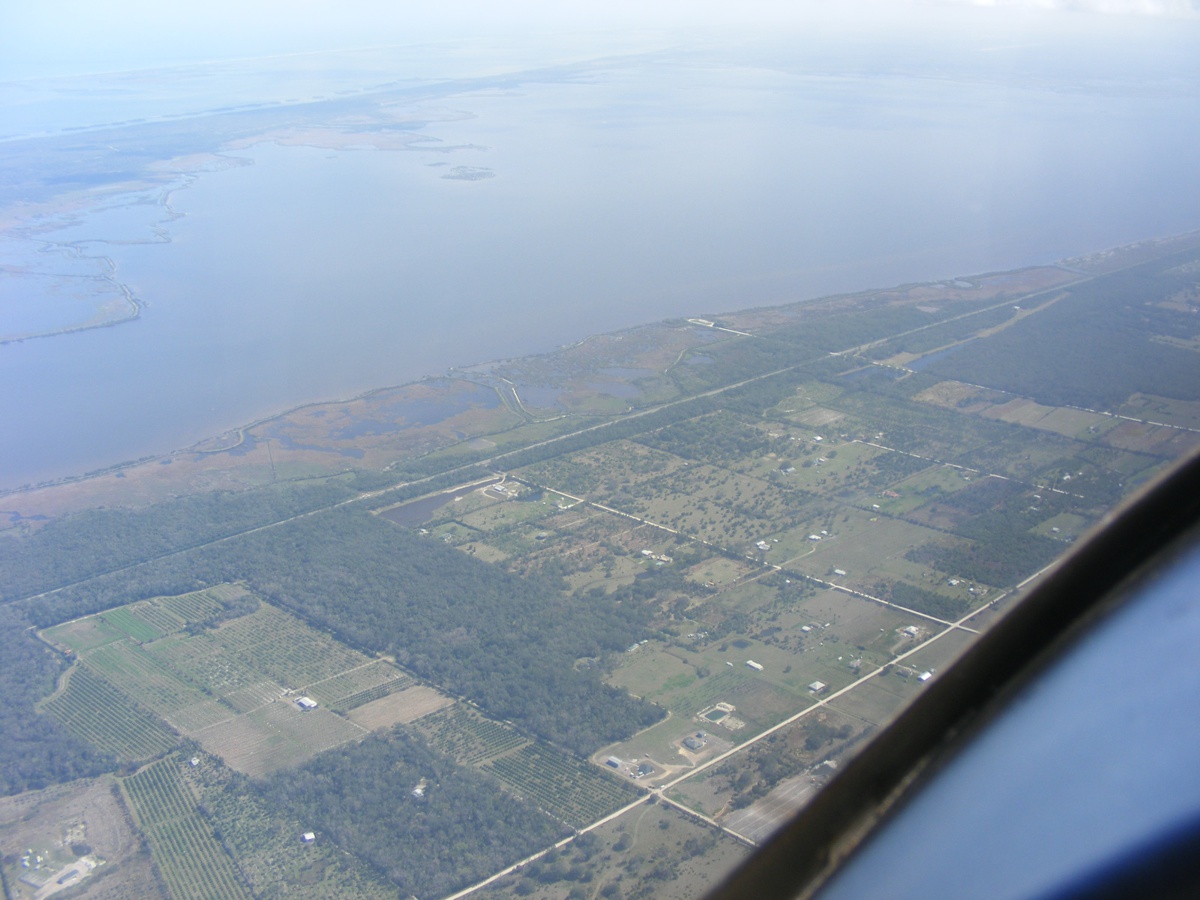 This processed image below is from the right center of the photo above.  It shows Tradewinds Aerodrome as seen from 2,800 feet MSL. 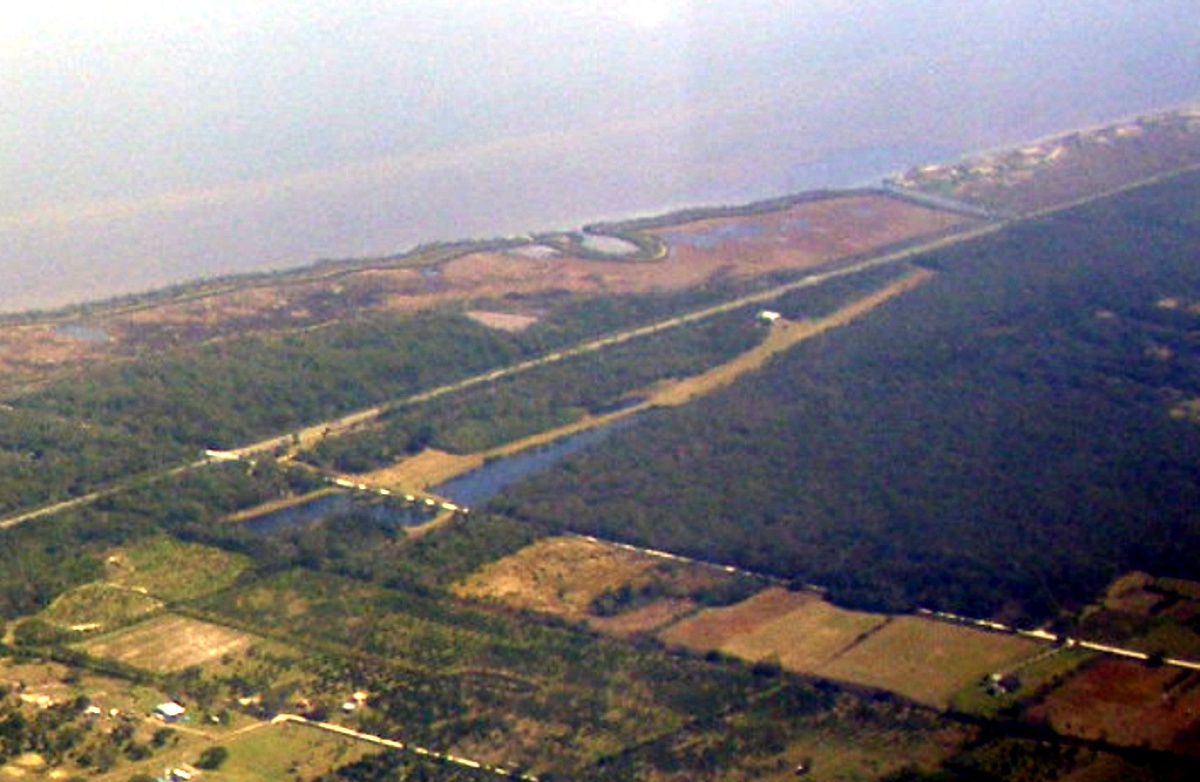 The JET contrails up high and me down here below 3,000 feet makes for an interesting photo with the clouds over the barrier islands. 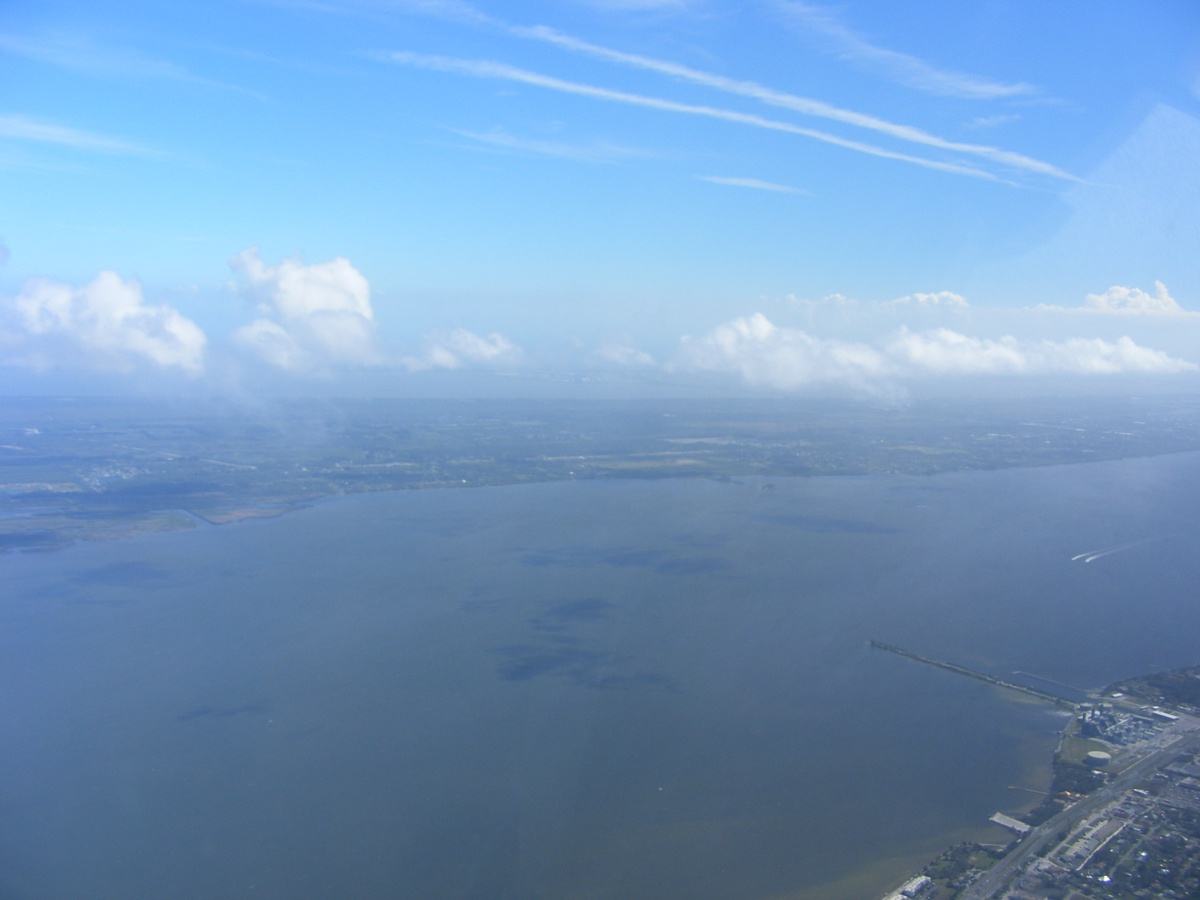 The reflection of my white shirt reflects from the inside of the canopy looking at my left wing and points east of here. 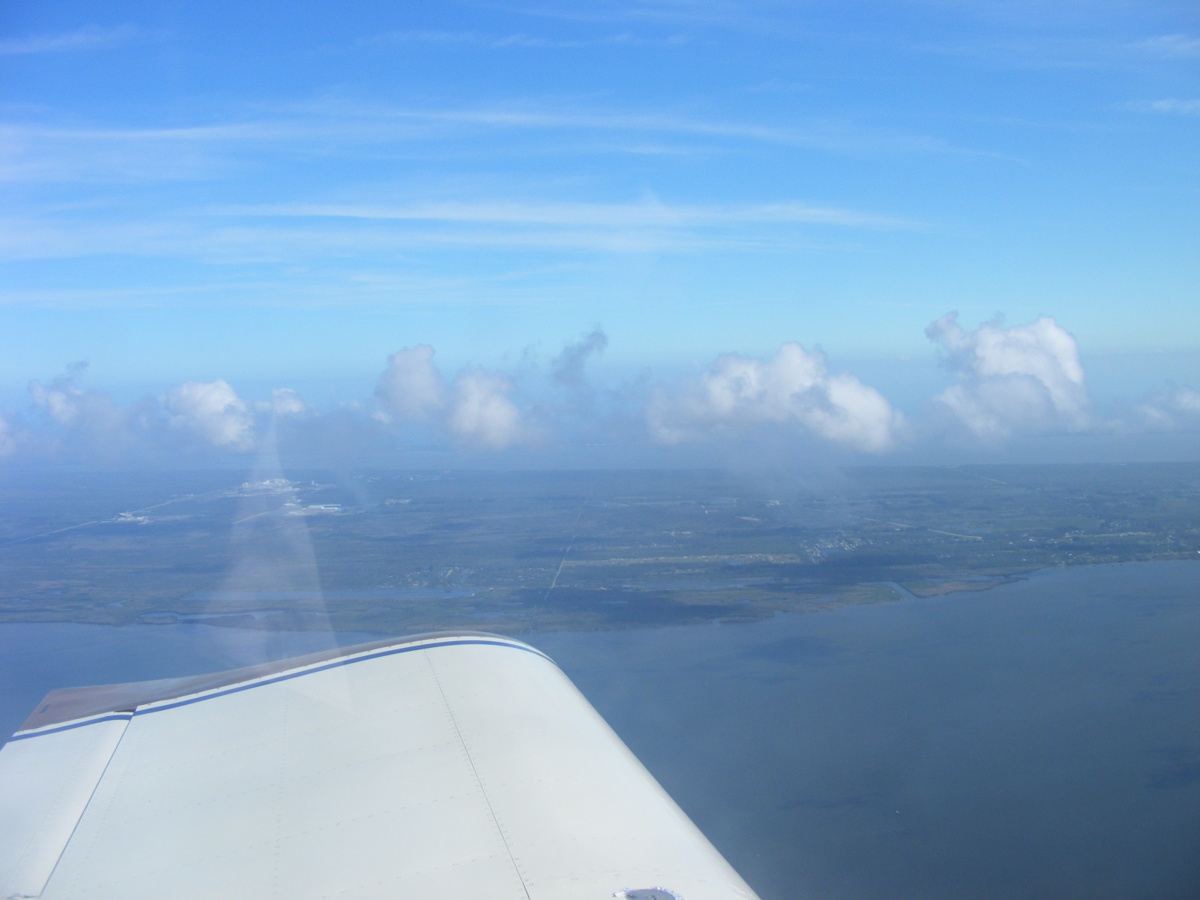 The view to the southwest reveals the I-95 intersection just south of the Port Saint John housing area.  The clouds are lower over there. 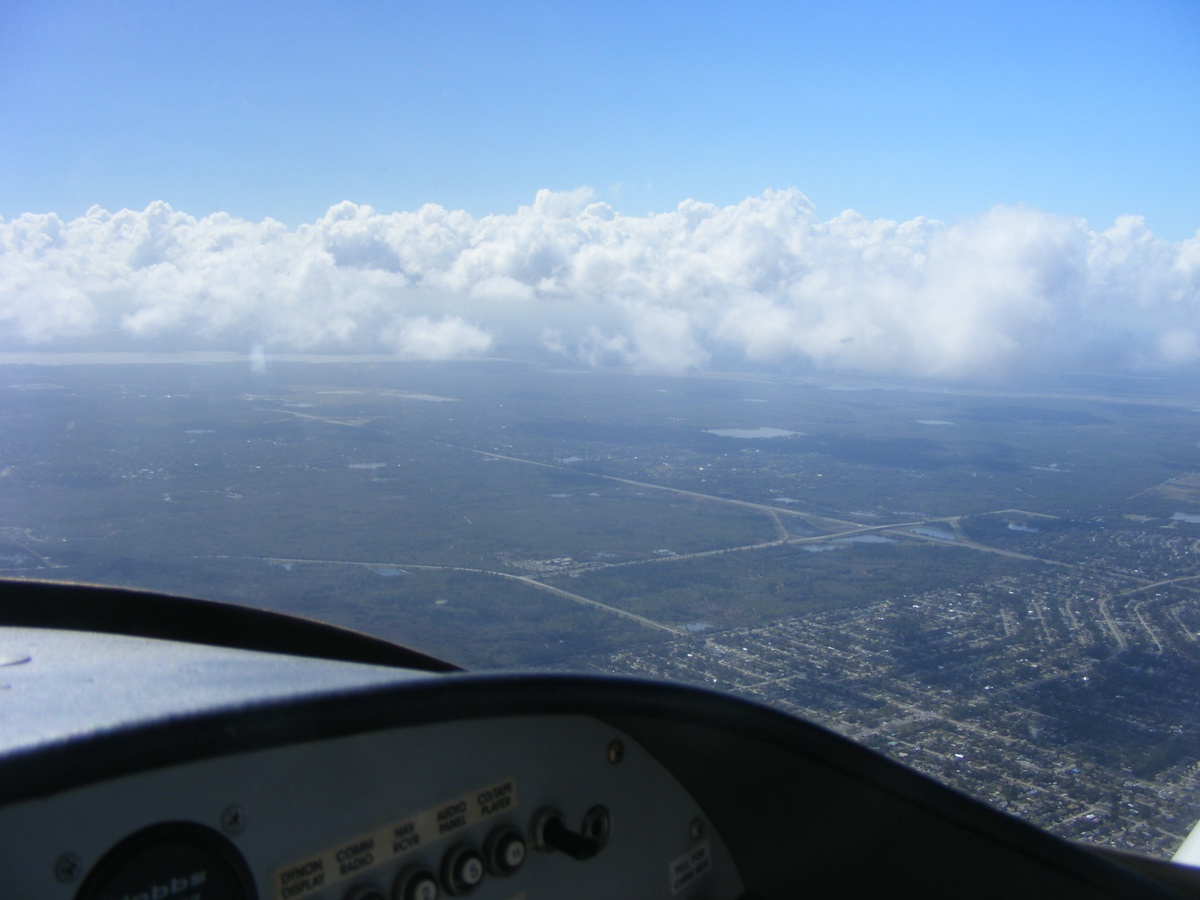 The view ahead has the reflection of my white shirt as I neglected to adjust my polarizing filter on my camera to minimize those reflections. 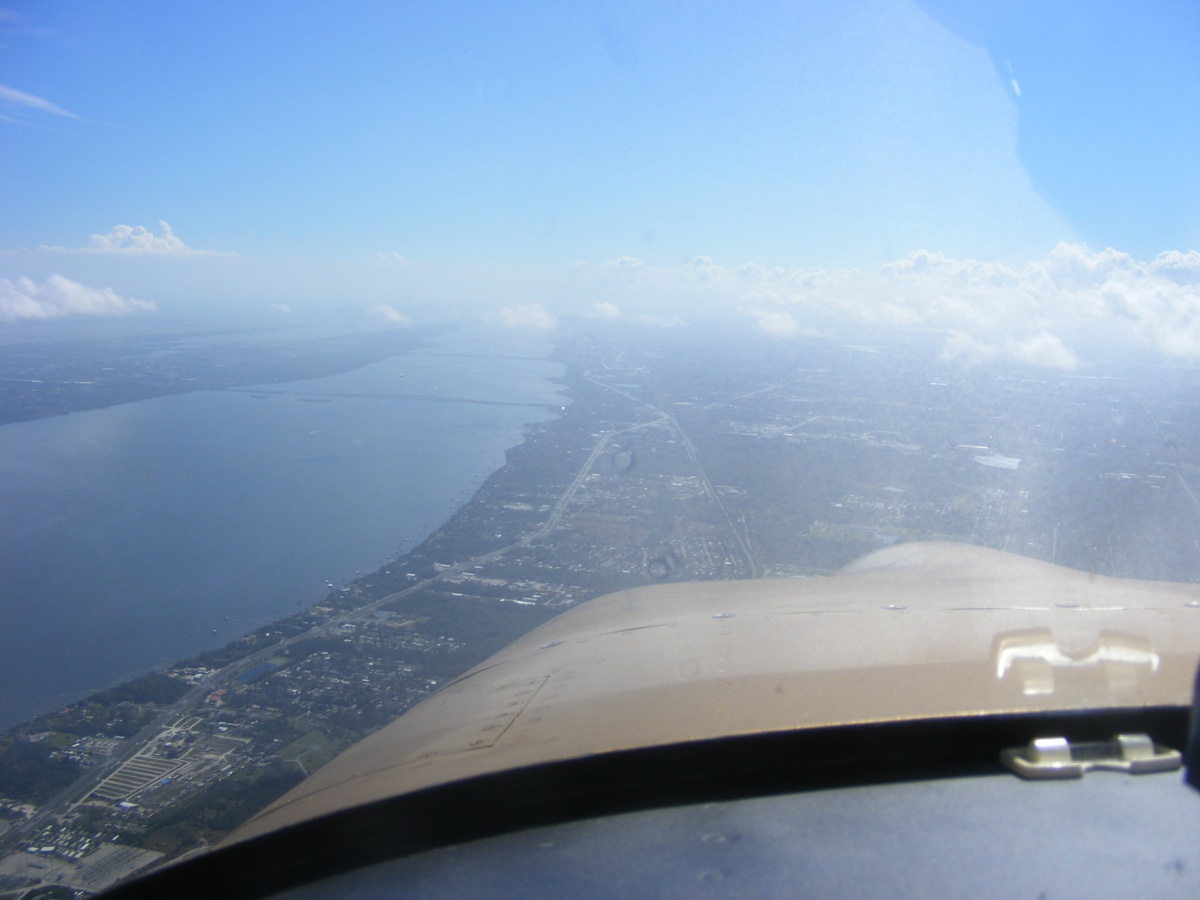 I looked southeast from my position and a familiar shape caught my eye and this photo.  That object is being followed by a boat on the river behind it. 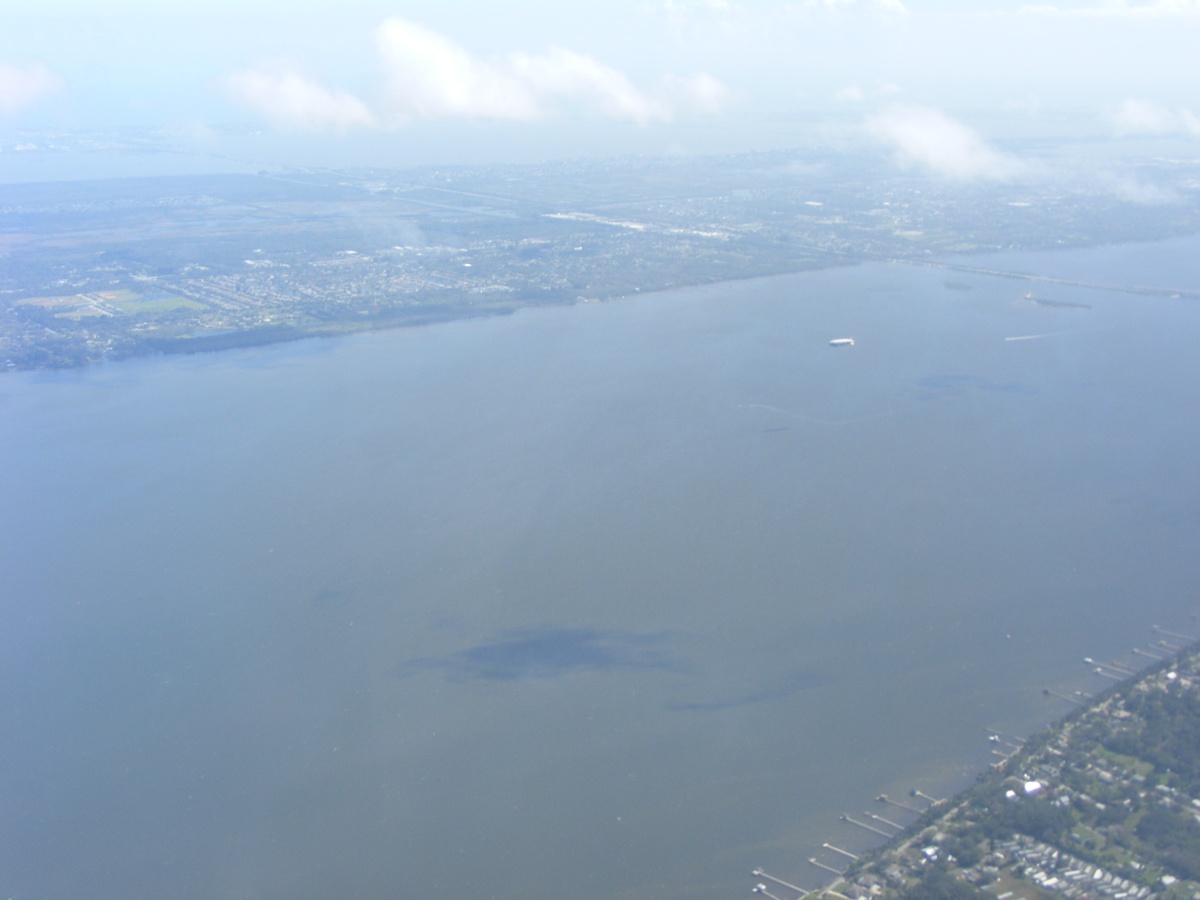 That is the Good Year blimp out there with his shadow preceding him at this hour of the day.  A smaller boat is on the water just about below the blimp. 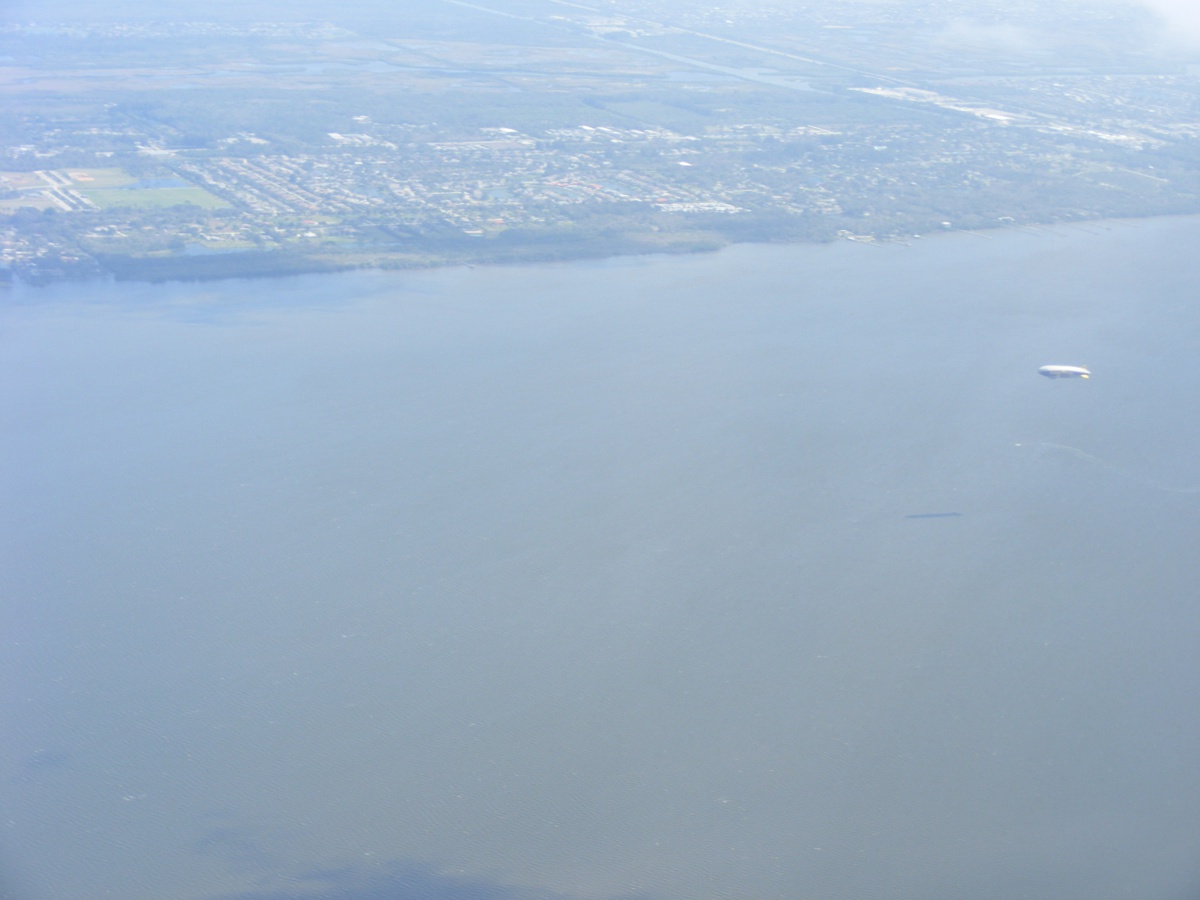 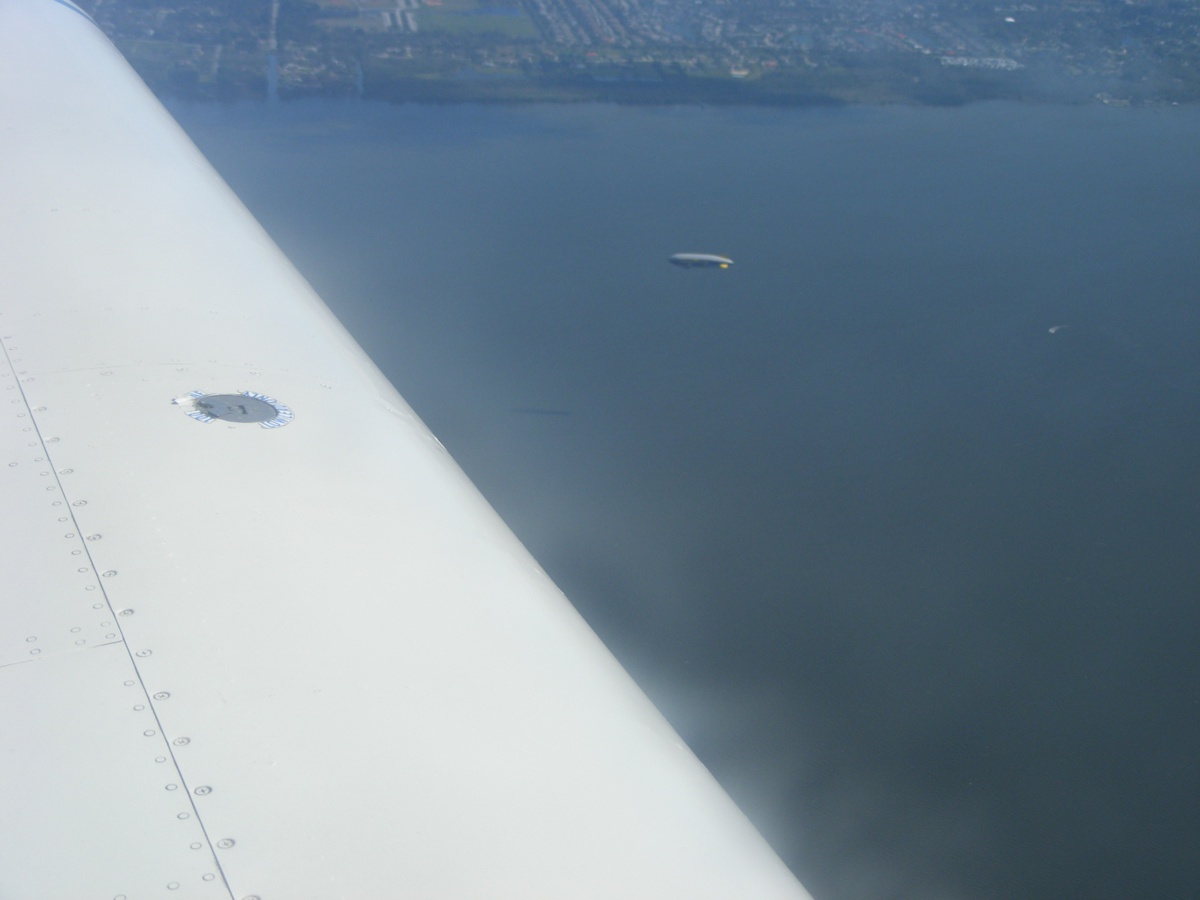 This image is cropped from the one above and magnified. 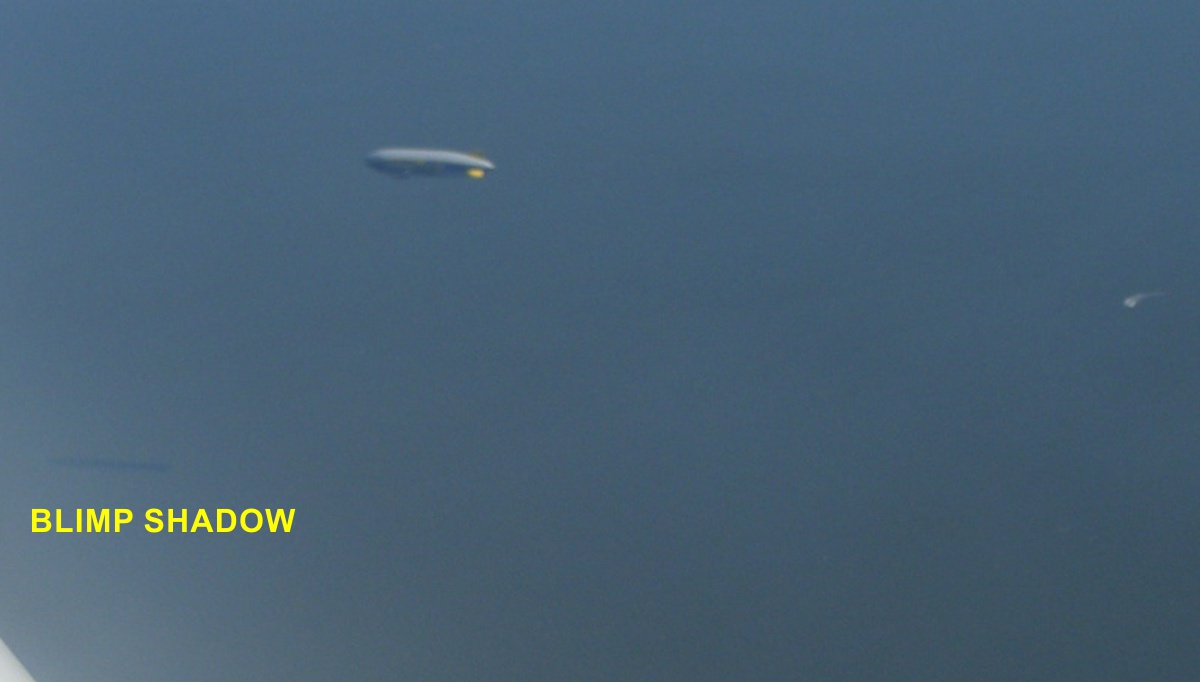 A parting shot out the side of my canopy before he disappears under my wing. 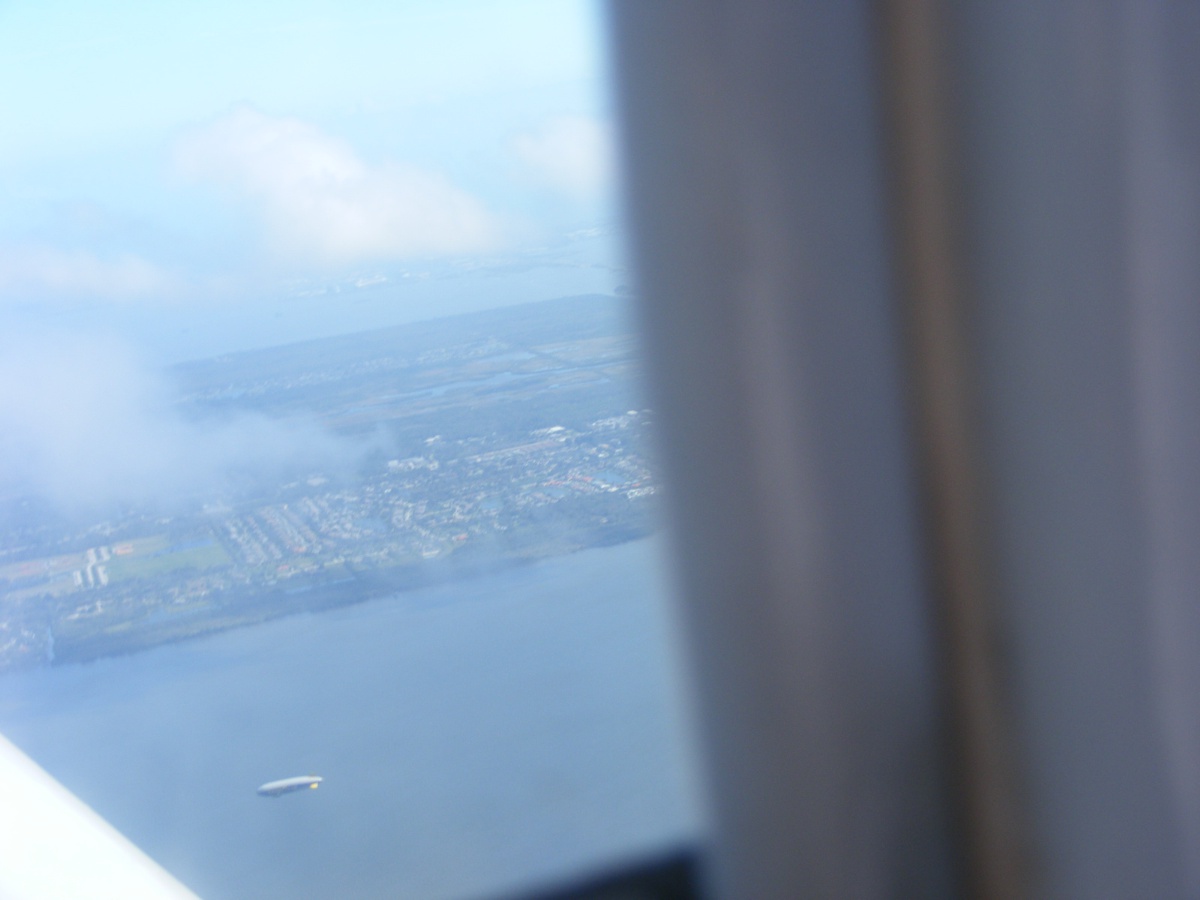 The remainder of the flight had one airplane pass over the top of me when I was down at pattern altitude for Rockledge airport.  It was a Piper retract about 1,000 feet above me as I was getting lined up for runway 18 at Rockledge.  The wind was still from the south at about 18 MPH coming down to final approach.  I kept the air speed at 100 expecting the wind to drop as I came below the tops of the trees on both sides of the runway near the north end.  The air speed dropped as I expected, but I had the momentum to remain above stall speed until I touched down with a little bounce before my airplane settled fully on the asphalt for the run to the south end exit to the ramp.  I had two flight segments today of 0.7 and 0.8 hours with Hobbs meter total time now at 413.7 hours.  The log book is up to date with another page filled.