December 8, 2013: I was doing errands yesterday and did not get to fly the Enterprise.  I got in the air around 3 PM today and took a flight down to Vero Beach (KVRB) for a touch-and-go landing there, followed by another T&G at Valkaria (X59).  I have flown to south Florida a number of times in the past as documented in these web pages.  Today was the first time I flew into Vero Beach even if it was a VERY short visit.  I discovered they have changed the ATIS frequency from 132.5 MHz to 120.575 MHz, effective October 19, 2013.  The current Miami sectional needs a hand-written update before you go there.  Needless to say, my GPS database was also incorrect. 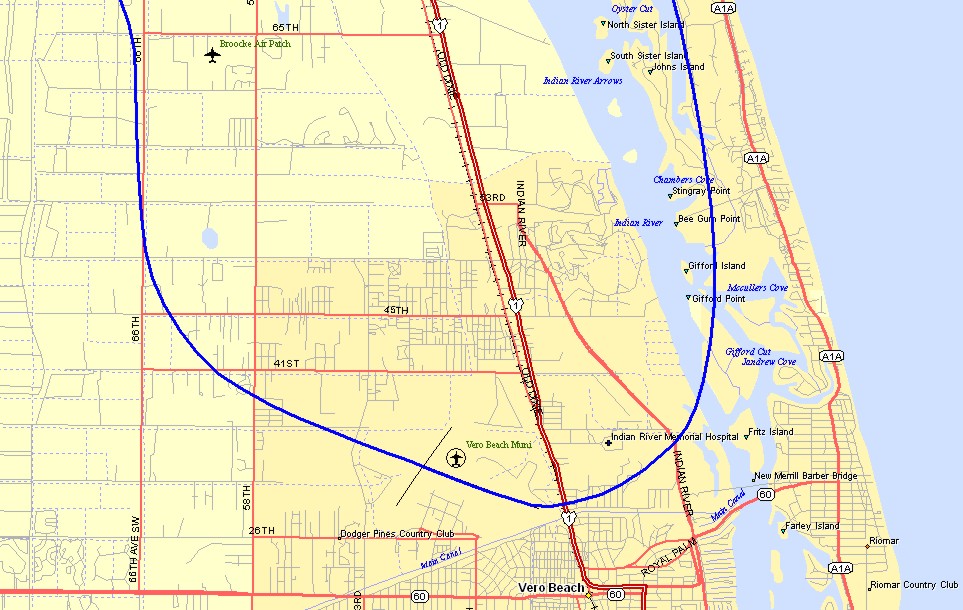 I have flown over Valkaria a couple of times since I moved the airplane to Florida last year, but today was the first time I landed there, if only for the T&G on Runway 14.  I flew up the barrier island and around the home of a fellow pilot north of Coconut Point, then over to near where I live. 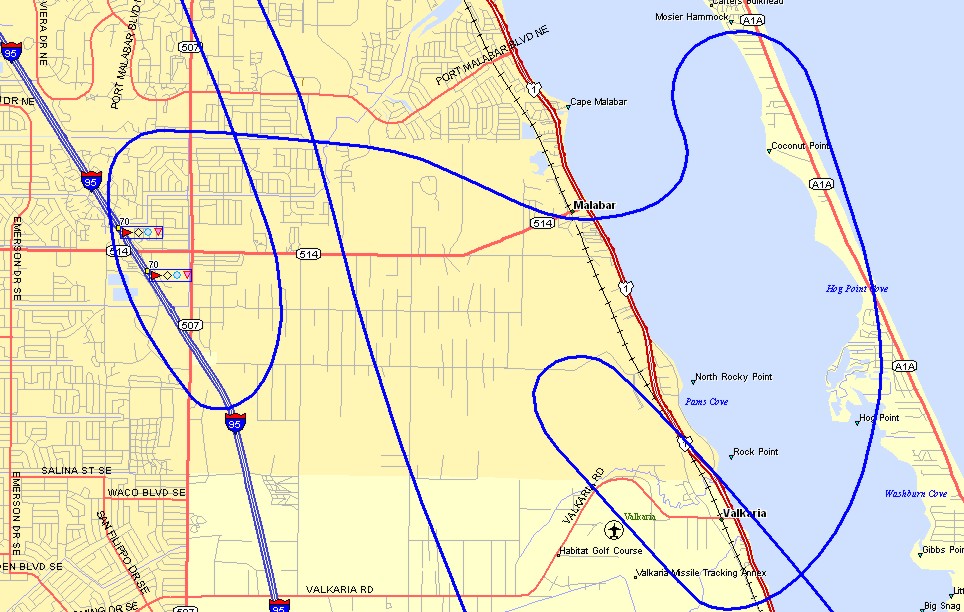 The flight was over the top of Melbourne (KMLB) Class D airspace with no radio contact needed.  Here is the view from 3,000 MSL during the southbound fly over of Melbourne International Airport.  Delta Airlines has some flights coming in here with Boeing 757 aircraft.  I have seen a 747 parked on the ramp here.  The wind aloft at 3,000 MSL varied from 25 to 30 MPH from the southeast.  It was slower going south than during the return flight to Rockledge. 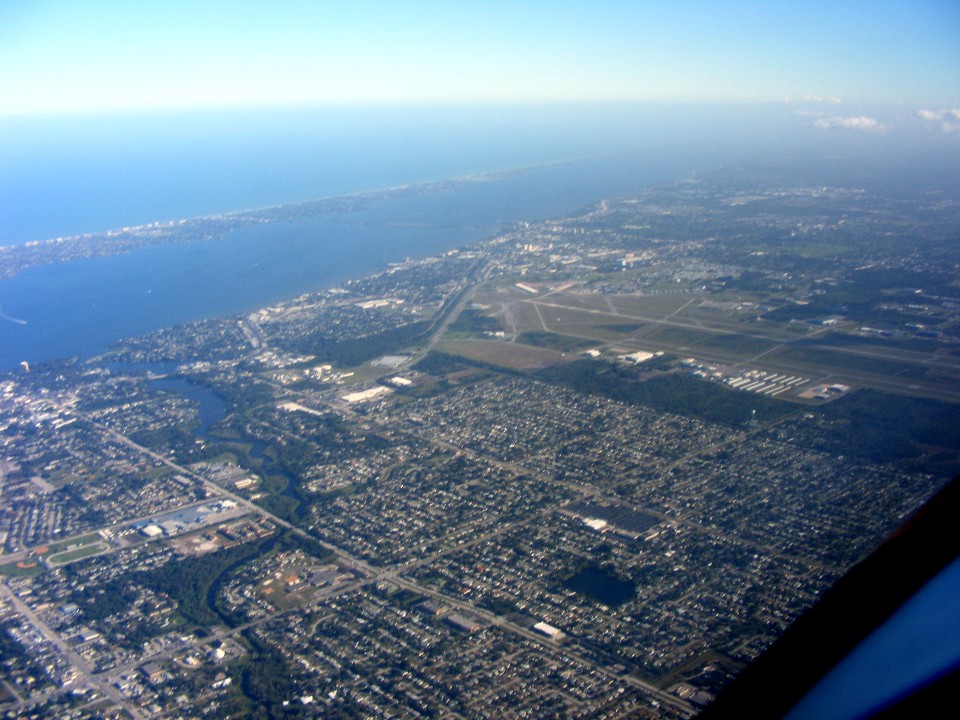 I departed Rockledge on runway 36 with a crosswind from the East.  When I returned one hour later, the wind was more from the south and I used the approach to runway 18.  Billy has put some blue painter's tape on the hangar floor for each of the airplanes.  I put mine back in place at the end of the one hour flight.    The Hobbs meter now stands at 350.3 hours total time on the engine and airframe. 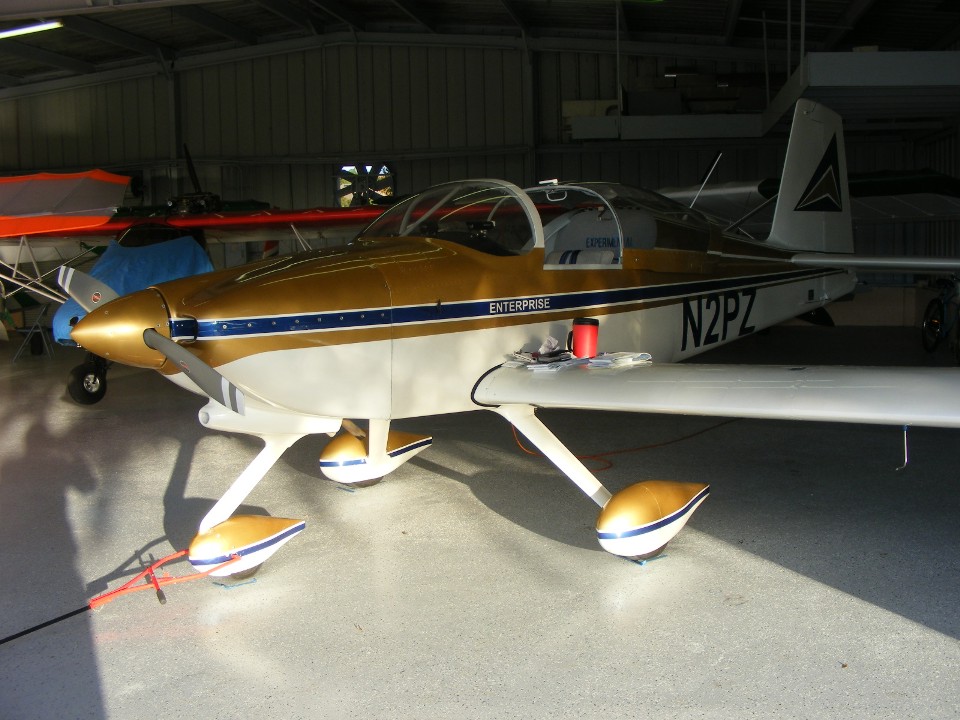 January 1, 2014:  A new year begins with this report on Christmas.  My wife's daughter and grandson came for a visit.  We had lots of hot wheels and other toys in the house when he was here.   He just opened one of the rare gifts that was not a toy.  The shoes are just like the ones his uncle Mark wears. 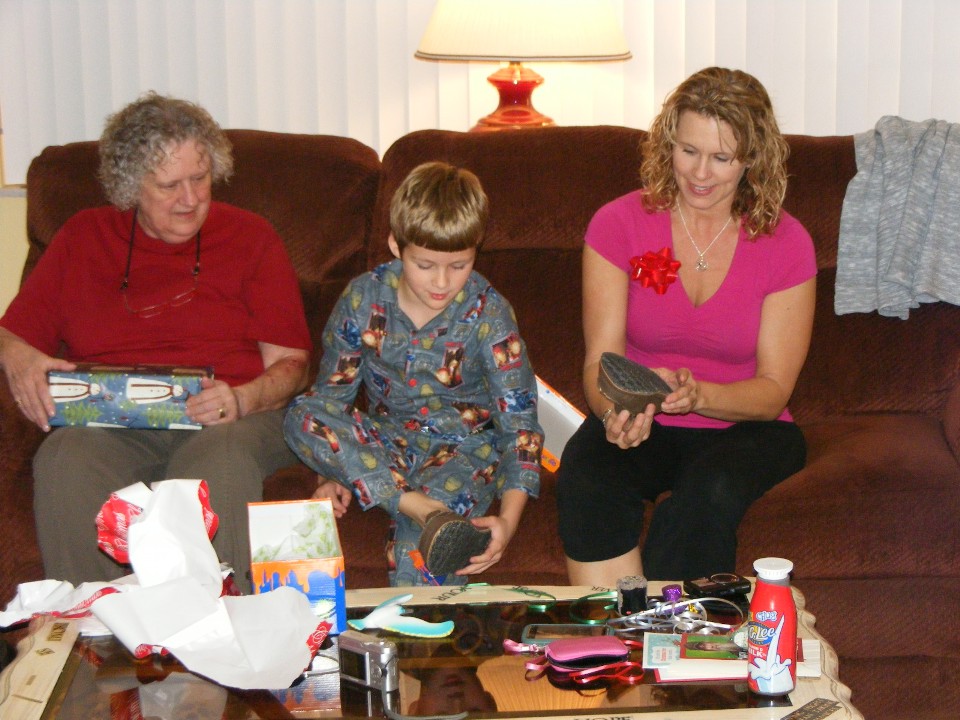 The Christmas tree had many gifts around it before we started to open them on Christmas Day.  This photo was taken about half-way through the opening of gifts. 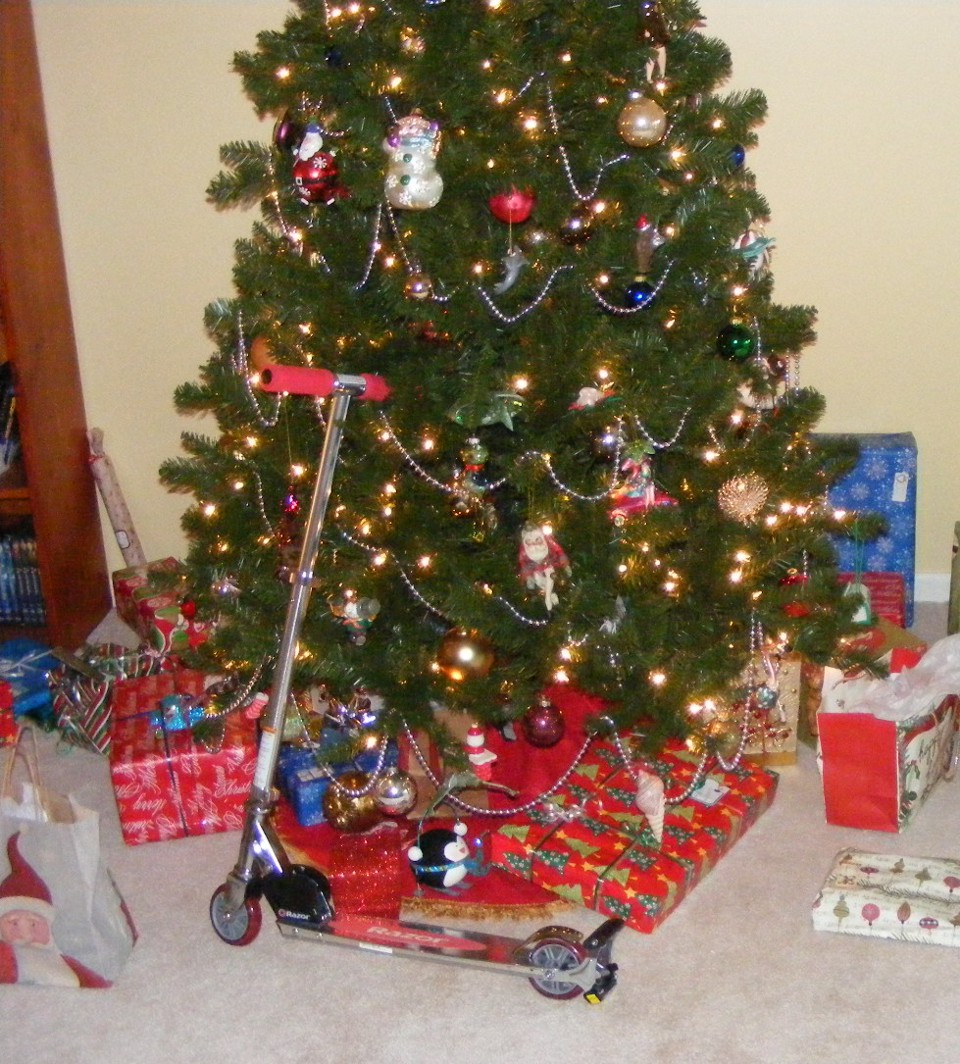 On the last day of their visit, I took my step-daughter and her son to the airport to watch his reaction to seeing my airplane.  By the time I had finished explaining the basics about flight controls and instruments,  it was apparent both of them wanted to fly in the airplane.  The weather was not the best on this day, so we shall go flying when they visit again. 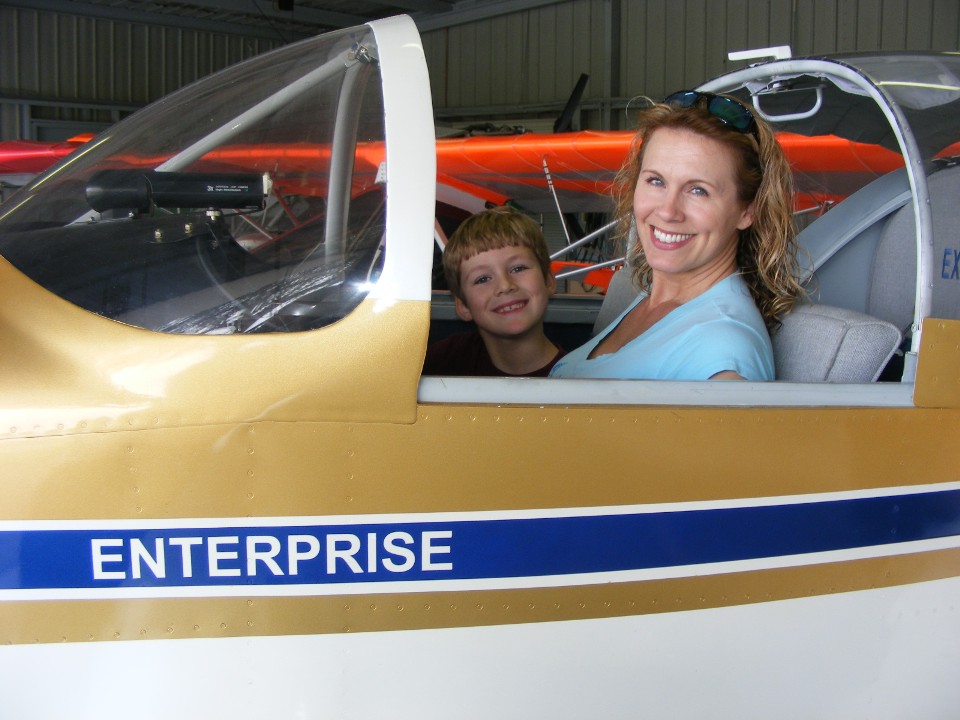 It is New Year's Day as I publish this update and a light rain is falling occasionally.  I sat down in the new car to program some of the 36 radio presets for FM radio stations and XM satellite radio.  Although the car is covered with rain drops, it does not show in this photo. 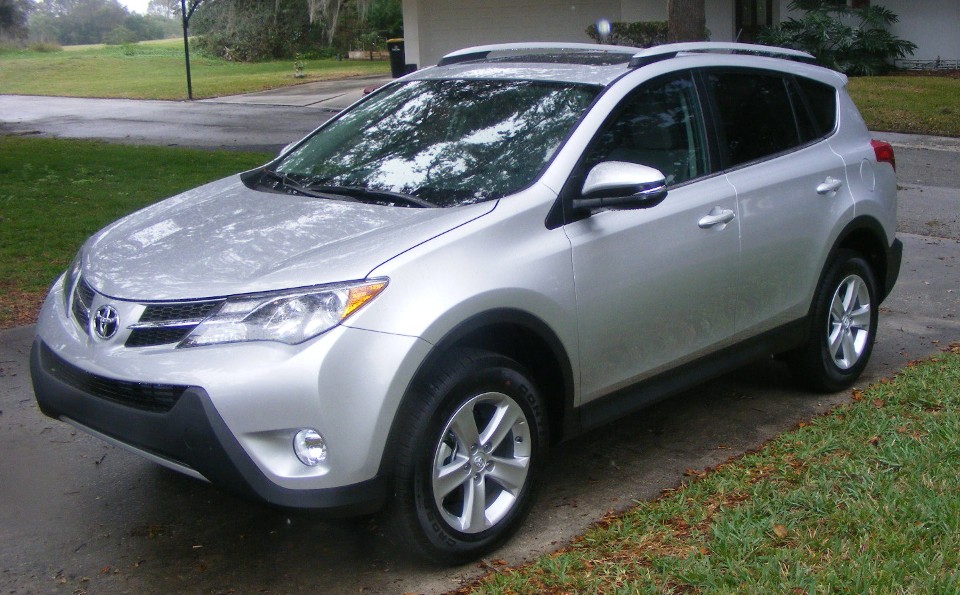