March 20, 2010: It is Saturday and the FIRST day of Spring 2010!  The good flying weather is here at last!  I called Marty Mason yesterday to see if he would like to get out and do some flying today.  He did not take long to say yes.  He had called me a few weeks ago to ask, but the weather has not been good until today.  The temperature as I pulled into the field was 39 degrees with a forecast for 70 later in the day.

Here is my first photo of the day taken at 8:56 AM Eastern Daylight Time, just a few minutes after take off and about to cross the first of the ridges between Folks Field and the valley where Dalton and Calhoun, Georgia are located to the east.  I am heading for the airport at Lawrenceville, Georgia (KLZU) to pick up Marty.  You can see the weather was great in Georgia.  I had called Marty just before takeoff to advise him of the clouds I could see to the northwest of Chattanooga.  I had looked at the weather radar before leaving home this morning and saw the clouds at the front were moving northeast and not southeast toward the area where we would be flying today.  I was checking actual winds aloft right after I took this photo to discover 20 MPH winds from the southwest.  It confirmed what I had seen on the radar earlier. 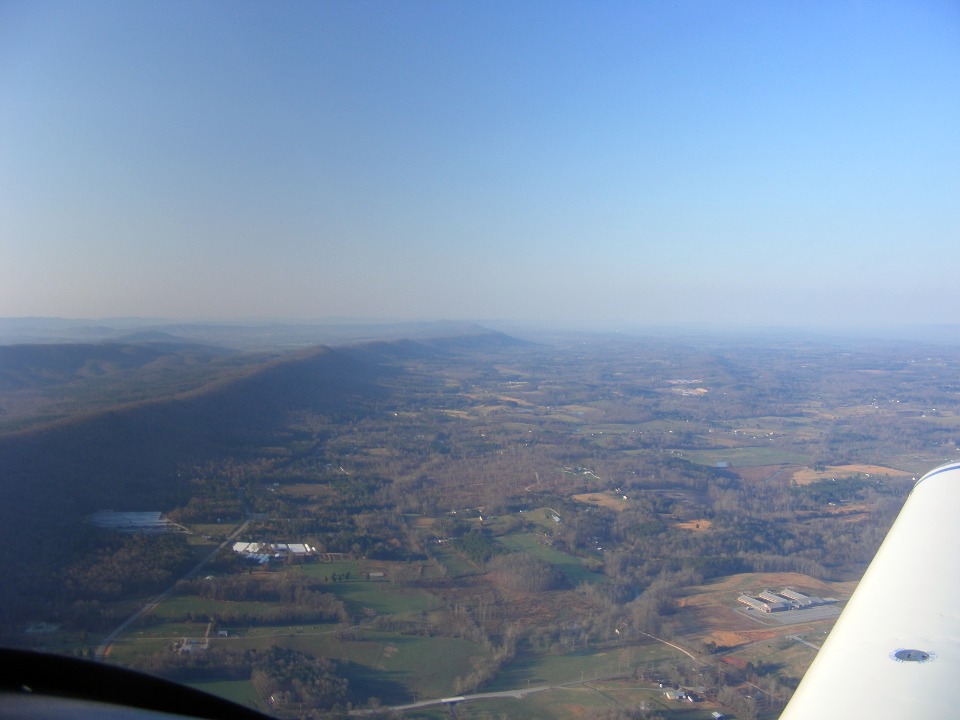 The flying time to KLZU was about 45 minutes at economy cruise of 150 MPH true air speed.  I was listening to the tower working a number of airplanes and it sounded as if the local EAA chapter was having a pancake breakfast.  I landed and met Marty at the restaurant and we headed out immediately for Madison Municipal Airport (52A) and the lowest AVGAS prices in the Atlanta metro area. 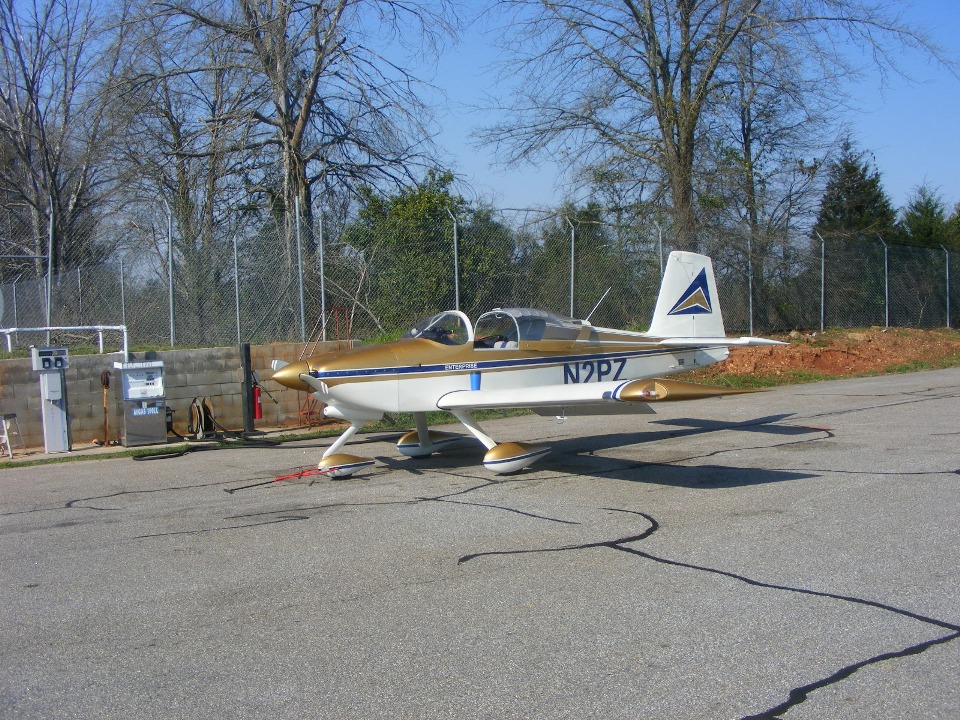 This RV-10 had been parked at the pumps when we landed.  I wanted to take this photo before the pilot departed.  The builder/pilot is from Anoka, Minnesota and also lives at an aviation community nearby in the winter seasons.  He said it took him four winters to build this airplane which was finished in January 2008.  That emblem on the back is for the University of Georgia.  A lot of sports fans in this area display it on the their cars and trucks.  This is the first airplane I have seen with it displayed. 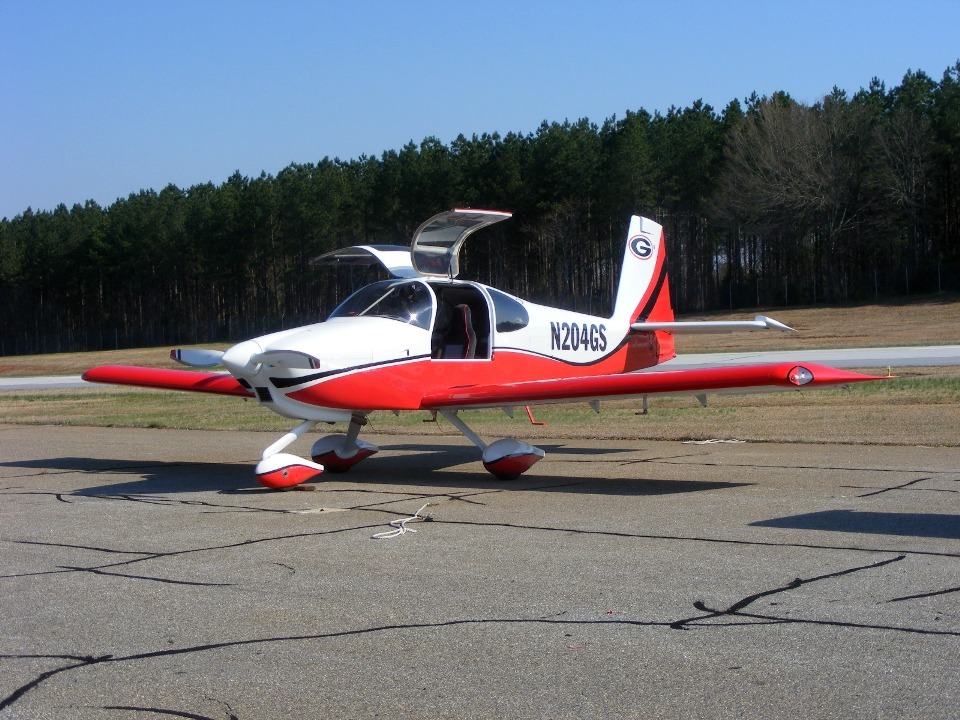 After fueling the airplane, I wanted to wash my hands in the FBO and I was surprised how it looks similar to the buildings on the town square here in Madison, Georgia.  The city put up the brick wall and porch as well as putting in a modern interior and pristine rest rooms.  This building should have a couple of rocking chairs and a barrel out front with a checker board, but a lawn chair is all there is for Marty to pose for this photo.  Notice that the warm temperature today has Marty in shirt sleeves and me out of my black sweater. 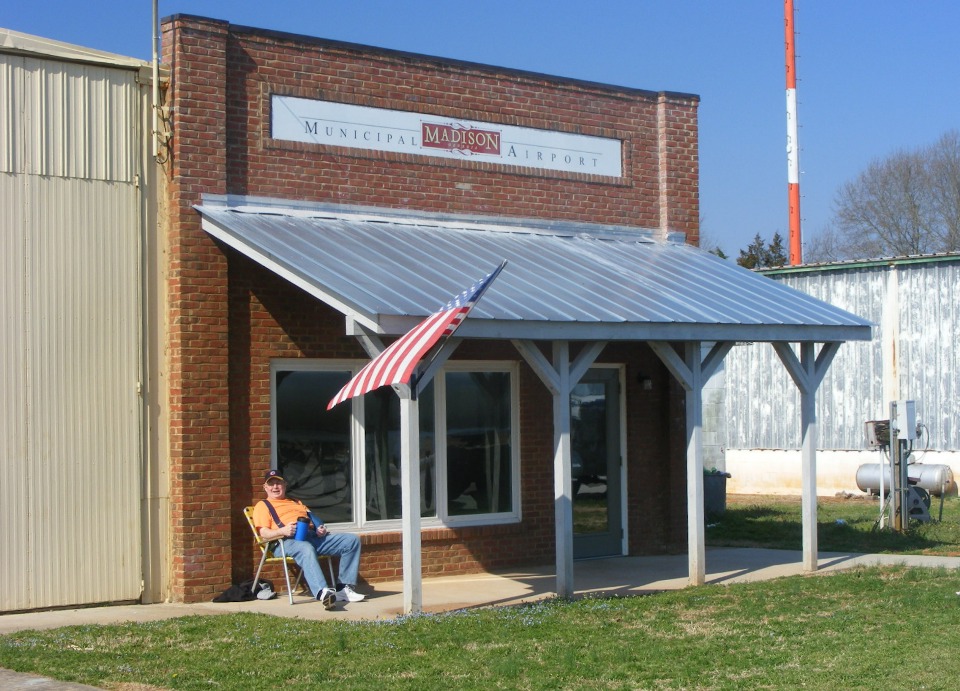 The guy on duty at the airport today is a retired Delta Airlines pilot, William R. "Rolly" Clark.  He came out to meet me as we parked my RV-9A near the RV-10 at the fuel pump.  I was surprised when he came up and called me by name.   He told me how he has been a fan of my web site for a number of years while he was building his RV-9 quick-build tail-dragger kit.  Rolly is the guy in the hat.   The other pilot/builder who built this airplane is R. A. "Bobby" Reynolds.  We had a good visit with these two as they told us about their building experience and how they did not use the builder number as the serial number for the airplane.  They used the airport code for this location, 52A.  The paint scheme is similar to one of Van's Aircraft factory demo airplanes.  Rolly finished his career with Delta flying the Lockheed L-1011 Tri-Star on the European routes.  He was also a training captain (instructor) for Delta.  You need to stop in Madison to pay him a visit and hear his stories of "flying the line" with Delta.  He can tell you what an L-1011 can really do in the air with no passengers aboard. 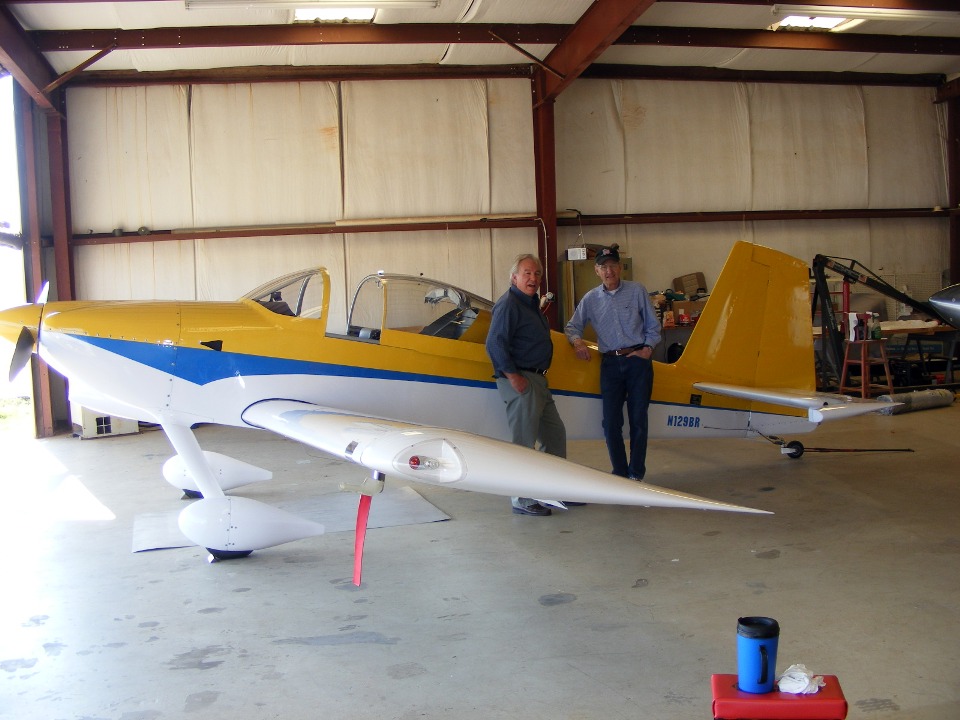 I am so busy composing my photos around the key subjects, I sometimes fail to notice my cup of ice water in the shot.  This is something I discovered only after posting this photo and the text above.

The instrument panel in their jointly-owned RV-9 is basic VFR with Van's Aircraft gauges and a Dynon D-10A identical to mine.  A Garmin 196 guides the way.   For a guy who has flown the "big iron" of the world's largest airline, this VFR panel is no work at all.  The propeller up front is a fixed-pitch Sensenich, leaving the throttle quadrant with no BLUE knob to push, pull, or twist.  The switch to the right of the RED fuel mixture knob is for the electric fuel pump. 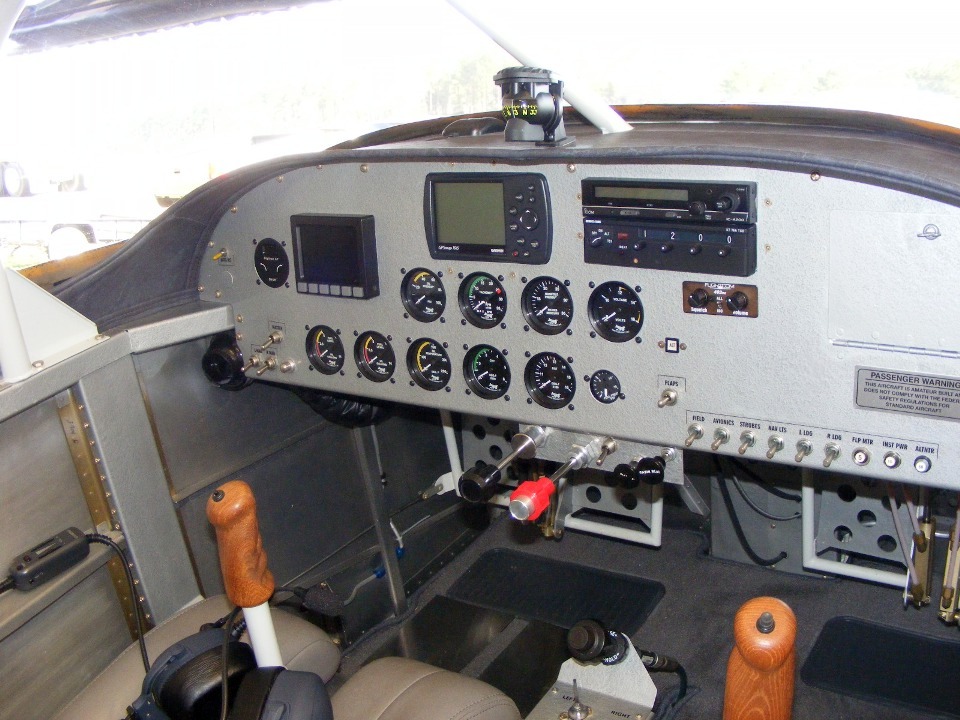 I had pulled my airplane south of the fueling station before we took a break inside the FBO.  Rolly moved the RV-9 up to the fuel pump to top off the airplane fuel tanks.  He had mentioned they had "company coming today" and had to move the airplanes around in the hangar to make room for one more airplane.  There was also an RV-6 in there, which I did not photograph.  I just checked the hangar photo above and noticed the spinner of the RV-6 is just barely in the right side of the photo of Rolly, Bobby, and the RV-9. 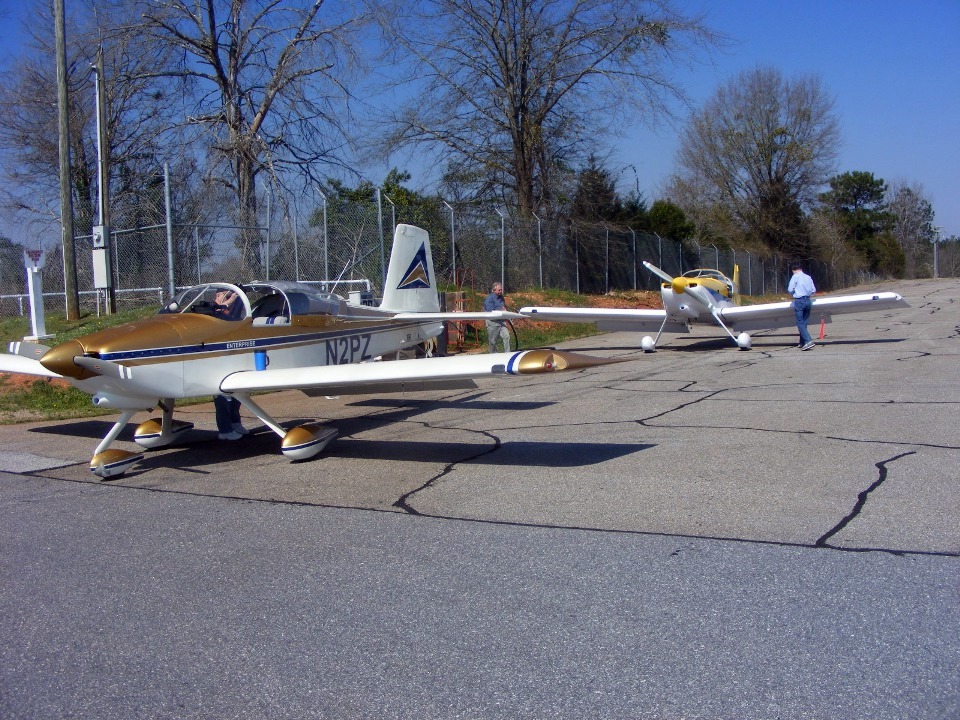 Rolly and Bobby fuel up their RV-9A. 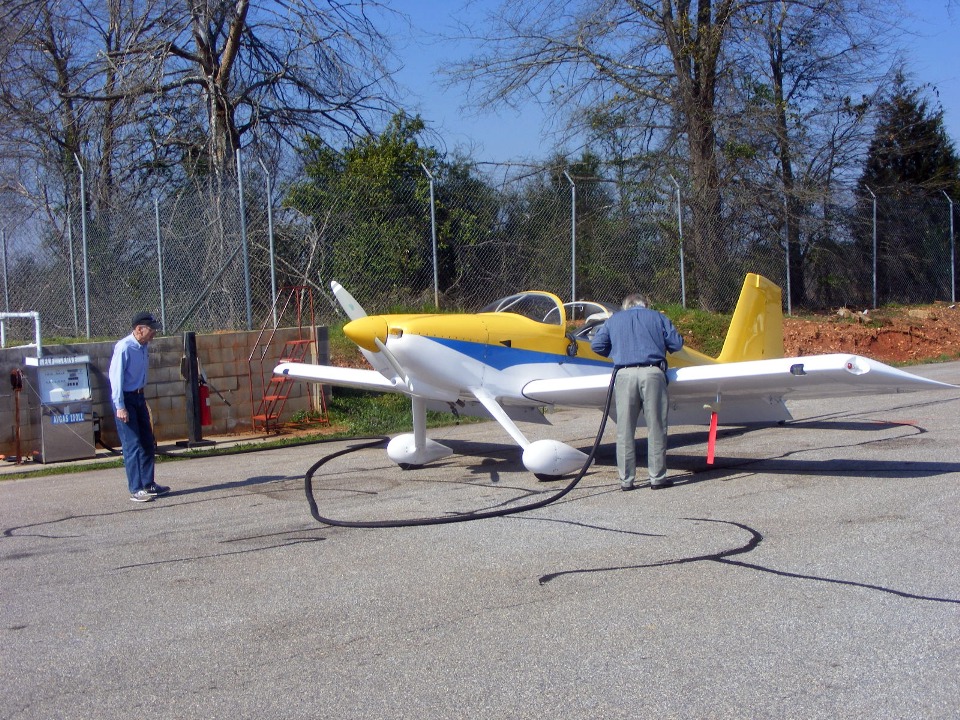 Marty and I got aboard and the question of where to go next was asked.  We discussed the possibilities of going over to Beaufort County airport north of Hilton Head, South Carolina.  I plotted a course that indicated about 1 hour 10 minutes of flying time.  He thought about it a minute or so and said it would be a bit far to go for lunch.  I talked about flying a segment of US 41 and US 341 west of Macon, Georgia.   That was much closer, so that was what we would do.  We took off with no course plotted in the GPS, just heading "that-a-way" on economy cruise of about 140 MPH.  It did not take long until we spotted this coal-fired power plant north of Macon.  I processed this photo to enhance the contrast and minimize the haze. 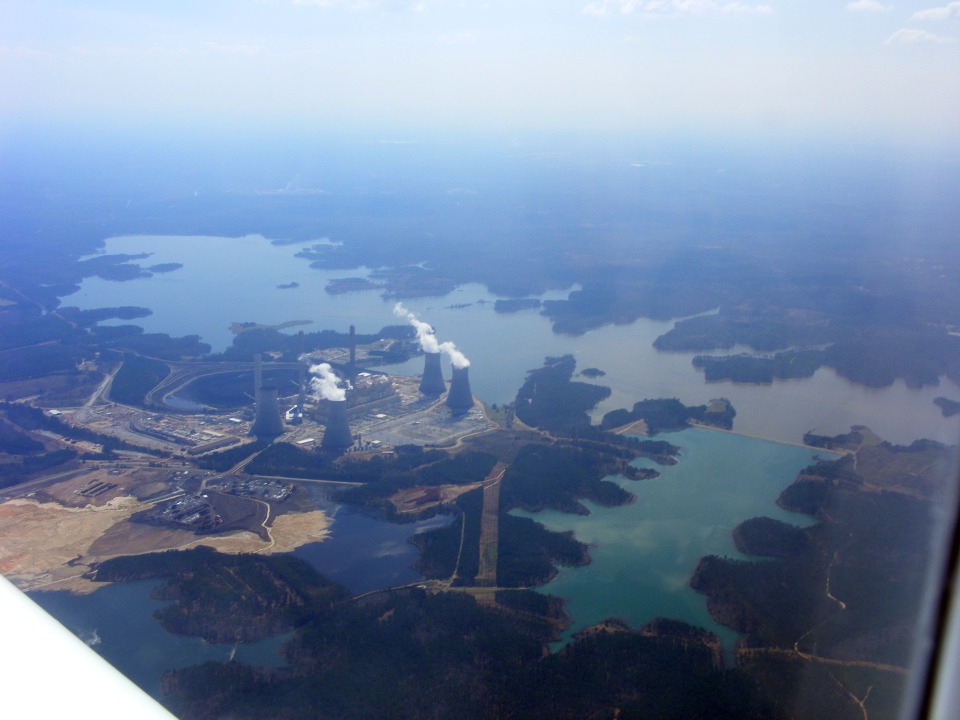 Marty was flying the airplane while I took these power plant photos.  The Southern Company owns Georgia Power and these power plants.  Here is the last photo I snapped before we headed west and south around the Macon area.