November 15, 2008:  This sounds like a dumb title for a web page about airplanes, but my old friend and his wife from South Florida came to visit for her first chance to see mountains in her life.  I called them when they were on the road from Florida Thursday, November 13th.  I suggested they make a tourist stop along the way north and get away from Interstate 75 and its heavy traffic.  The Civil War POW camp near Andersonville, Georgia was along one of the alternative routes.  They found it as emotional as I did when I visited there a few years ago.  They spent the night in Columbus, Georgia and continued their trip toward Chattanooga on Friday.  They were driving up US 27 and would find the Chickamauga National Battlefield Park before reaching Chattanooga.  I made sure they did not miss it.  The NEW US 27 four-lane route goes around the National Park.  I called them again just as they were approaching the south side of the park and guided them to the old US 27 turnoff to go into the park.  They called me after touring the museum and I gave them the short cut to my place.  We went out for dinner and talked about my plans to get the most out of their long weekend in the Chattanooga area.  With the weather keeping us grounded until Sunday afternoon, I came up with a couple of short road trips for some sight seeing from the car on Saturday, and again on Sunday.

Darlene has always lived in SE Texas, SW Louisiana, or Florida.  They have been to the Texas hill country around Austin, Texas, but this is their first time to get to the south end of the Appalachian Mountains near the Chattanooga area.  The original plan was to take them flying today, a Saturday, with Wendell and I flying our airplanes over toward the North Carolina state line with Tennessee.  The weather had other plans for us for today.  The airplanes were grounded due to low clouds and rain, but the forecast for Sunday afternoon looked promising for flying in this area.   So, today, was a road trip in the morning, in the light rain showers, along the Ocoee River on US 64 East from the Chattanooga area.  I did not take my GPS in their car for the morning trip of just over 200 miles around the loop you see below.  This road trip was to give them a close-up look at some scenery I hope to show them from the airplanes tomorrow.  The focus today was on fall colors in the national forest area and the scenic Ocoee River area.  It was cold and occasionally wet.

Here are Monte and Darlene posed in front of Ocoee number 2 dam adjacent to US 64.  This is about 53 miles from my house.  A spillway leaves this dam routing water four miles downstream to a power house generating electric power. 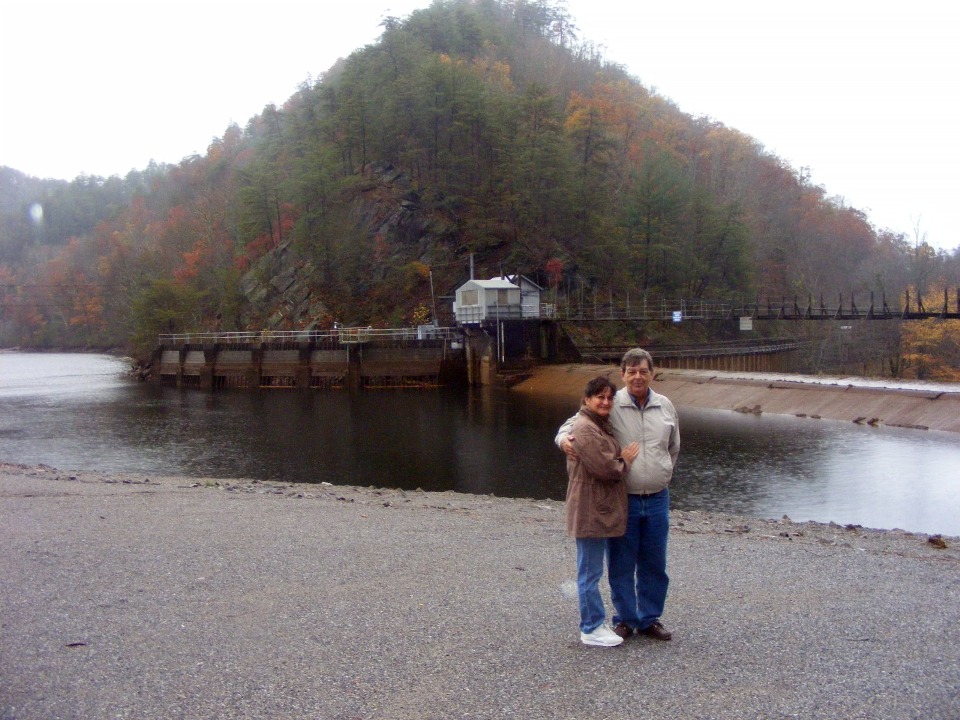 Another two miles up the road heading East is the area on the river where the 1996 Olympic White Water Kayak events were held.  There is a hospitality station and gift shop here where several hiking trails begin just across the river.  It is a cold and rainy day today, leaving the picnic tables unused today compared to warmer spring and summer days.  The Tennessee Valley Authority (TVA) controls the water flow on this river and the power houses that generate electricity in this area. 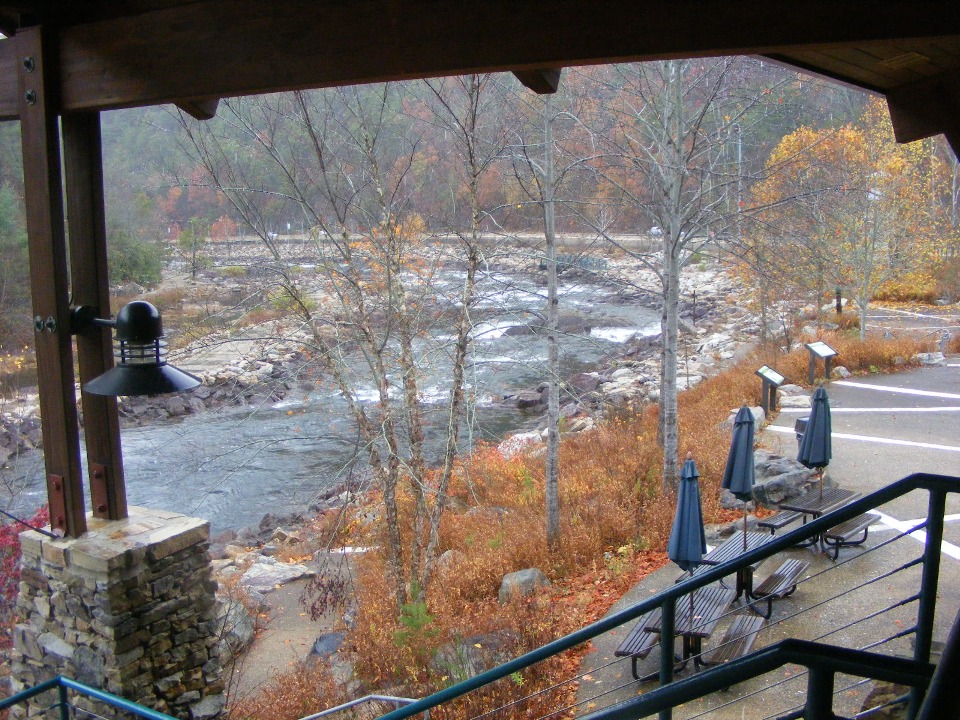 Here is the proverbial tourist photo with the river in the background taken from the landing half way between the floors of the building. 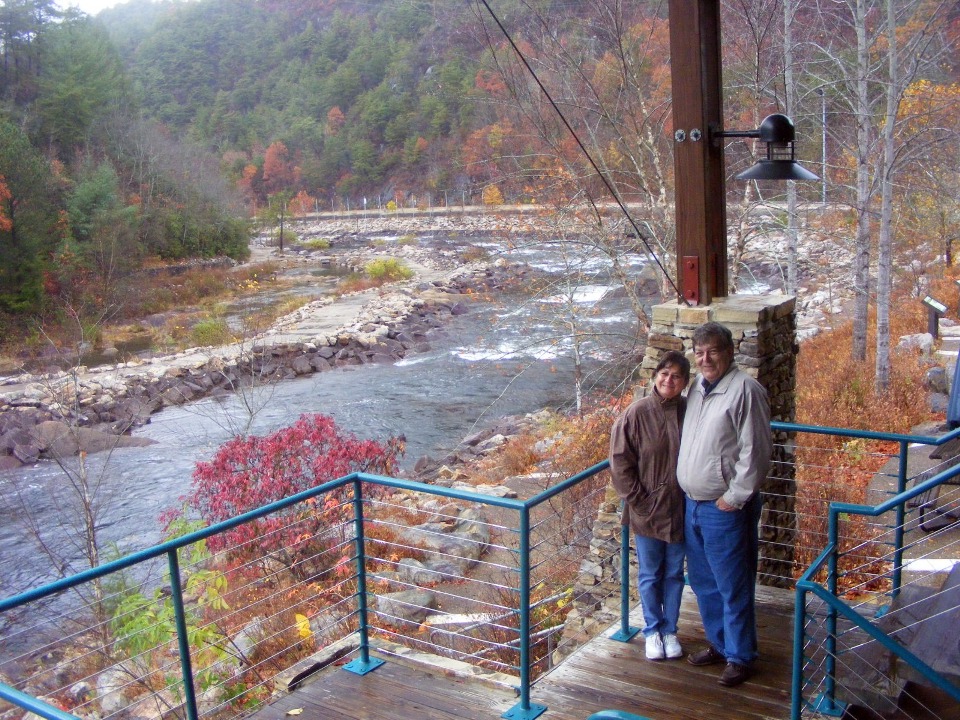 We spent the rest of the morning traveling some mountain roads of SE Tennessee, and staying away from the high-mountains of North Carolina.  The occasional light rain shower made the view from the car windows acceptable along the winding roads of the low-mountains of about 2,100 feet in elevation along our route.  The map at the top of this page shows the entire route which came back to my house after a barbecue lunch on the road near Sweetwater, TN.  As we were getting back to Chattanooga, a rain shower was covering Lookout Mountain.  That was our planned sight-seeing location for this rainy afternoon.  A short stop at my place allowed me a chance to check the weather radar on the computer and make sure we would have a chance to complete the sights for today.

The first stop enroute to Lookout Mountain was at the US National Cemetery to see the monument to the Andrews Raiders.  They were union soldiers who volunteered for a covert mission to infiltrate the south in April 1862 to sabotage the Western & Atlantic Railroad between Atlanta and Chattanooga.  The idea was to disrupt the Confederate supply lines to their army in Tennessee fighting against the Union troops near Shiloh, TN.  That bronze locomotive and tender on the monument is the General, stolen that day and taken 87 miles north toward Chattanooga on the raid that failed due to the rainy weather.  The raiders were not successful in burning the old wooded railroad bridges across the rivers on that route.  The men buried here were hanged as spies since they were not wearing uniforms during the raid.  These soldiers and the others who survived the POW camps or were traded to the Union for Southern POWs -- ALL received the very FIRST Congressional Medals of Honor awarded to American soldiers. 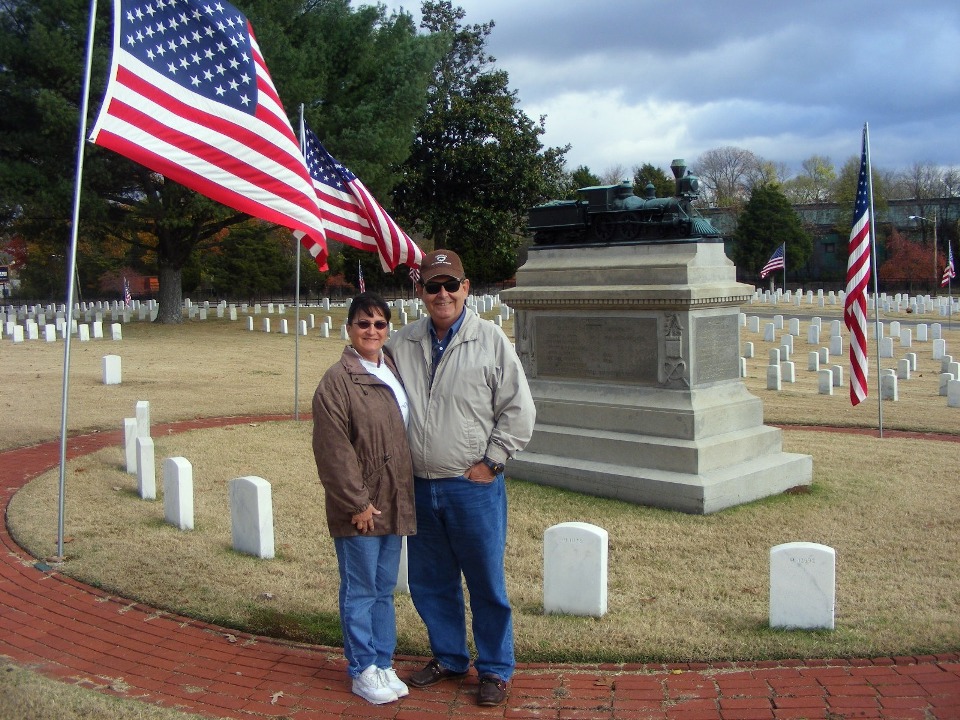 There are a couple of good reasons for Monte's big smile compared to the photos taken earlier today along the Ocoee River.  The weather is a bit warmer down here near the Tennessee River, and he bought a souvenir hat during the stop at the Ocoee River Olympic site.  The low-hanging clouds and occasional light rain this afternoon are the reason there is no flying today.

The first stop many tourists make when going to Lookout Mountain is at the Incline Railway.  It is located at the base of the mountain in the Saint Elmo district of Chattanooga.  I took this photo of one of two cable cars as it arrived at the Saint Elmo station.  Those power transformers send power to the motor house at the top of the mountain.  Look carefully at the photo in front and behind the rail car and you will see the dual cables between the rails that pull the car up the mountain and the rollers in front of the car that cradle the cables when the car is down at this end of the tracks going up the mountainside. 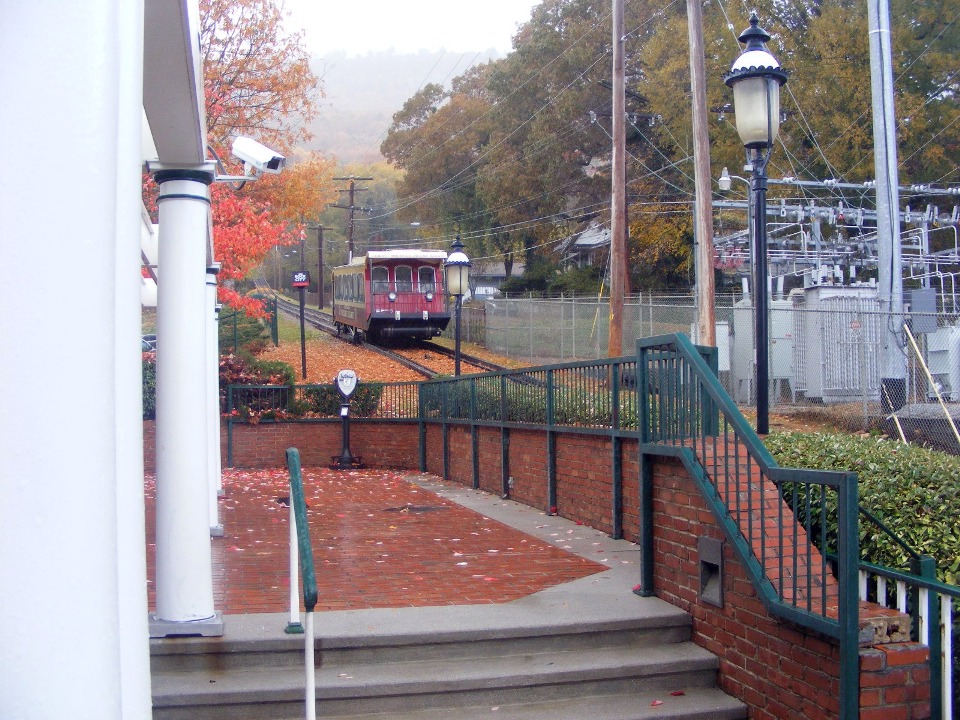 This photo was taken between cold, light rain showers.  Can you say "wind-chill factor" and know that we have that problem in this area?  In case you missed it in these two photos, notice that the rail car is loaded and unloaded on a sloped track, not level as in typical railway passenger cars.  The reason is the seats in the car and the floor they set on is a series of inclined steps similar to the seating in a stadium.  The passengers sit facing the valley to get a scenic view as the cars ascend and descend the side of the mountain.  They ride "backwards" going up the mountain, but are facing forward during the trip down the mountain.  Both cars pass at special switch tracks at the center of the route up the mountain.  I have not had a ride on the "Incline" since I was a child in the 1950's.  At $14 for a round-trip ticket, I an not likely to do that since you can also drive to the top of the mountain and see the views along the way. 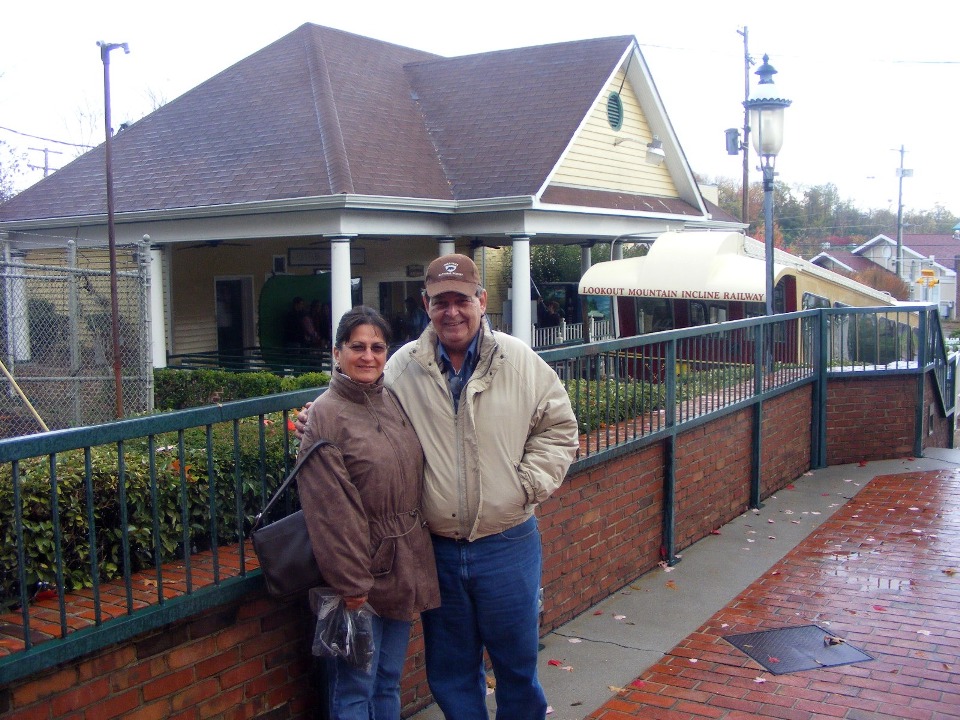 Here is a map segment showing our route across Chattanooga and up and down Lookout Mountain.  You can clearly see where we came over Missionary Ridge via Interstate 24 at the right of the map below.  We got off to take 23rd Street and some side streets over the National Cemetery and then continued up to the old Southern Railway Station which is now a Holiday Inn hotel where guests can sleep in Pullman sleeper cars or regular hotel rooms in a conventional hotel building.  Today, it is known as the Chattanooga Choo Choo as a tourist stop where you can buy a ticket to ride on an old steam train up the Tennessee Valley Railroad Museum and back.

This is the entrance to Point Park, a small US National Park at the northern point of the mountain. 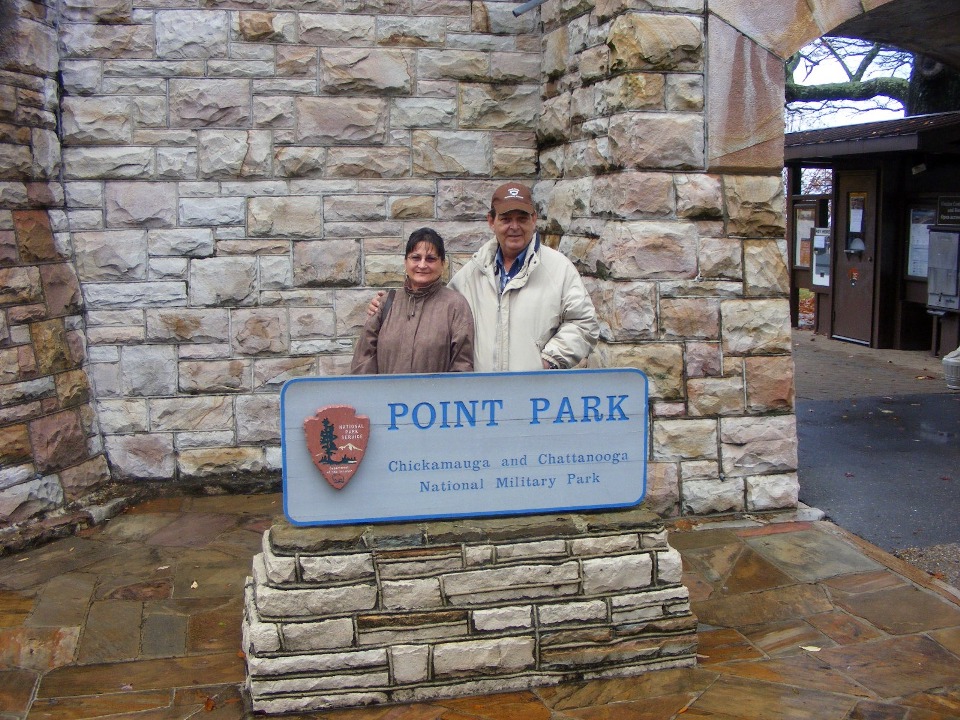 Here is the full view of the entrance from a vantage point across from the little museum near the gateway. 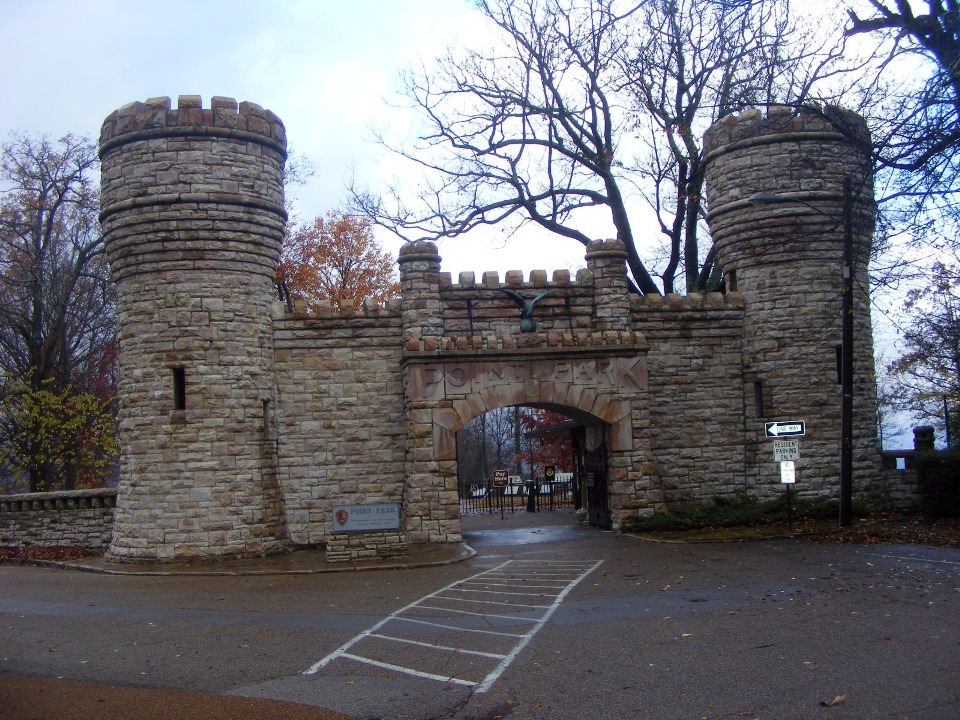 At the end of mountain tour by car, we headed down to Folks Field to let Monte and Darlene meet Wendell and see the airplanes before the flight planned for Sunday, November 17, 2008.  Darlene was fascinated with the Aeronca Champ and its fabric covered design.  Monte had to remind her that the Stearman he flew to do crop dusting as a teenager was built the same way as the Champ. 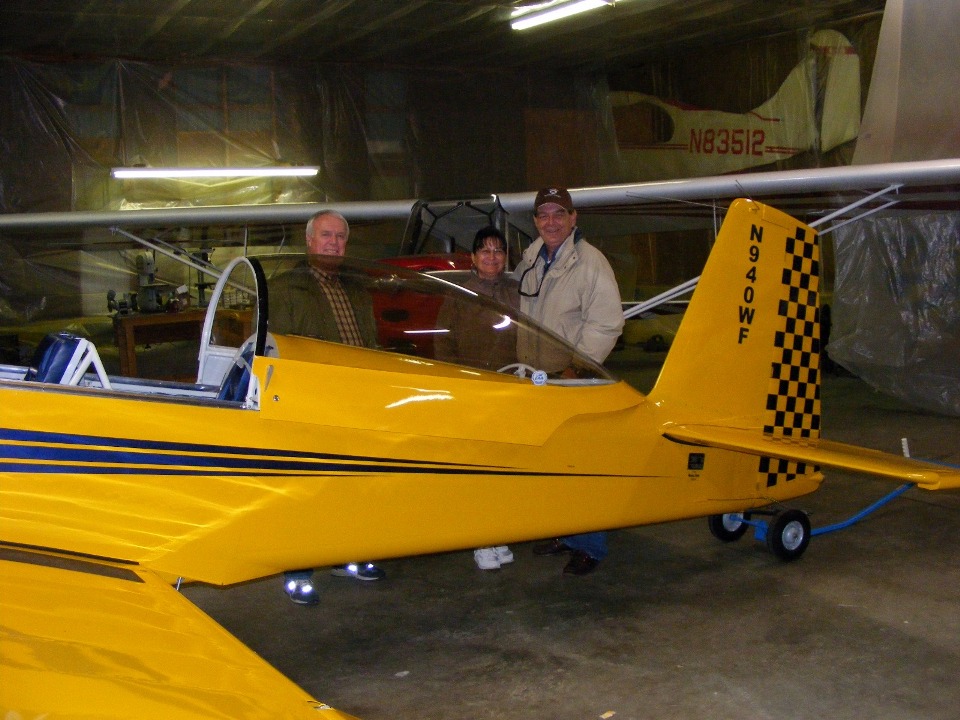