October 28, 2005:  Today's short flight was delayed from Wendell's air strip by a power outage that prevented me from raising the hangar door.  About ten minutes before my planned 9:30 AM departure, the power went off for about 55 minutes.  The temperature was around 34 degrees with a light frost on the runway when I arrived at 8:15 AM this morning.  I plugged in the electric heat strips on the bottom of the engine oil sump and noted the power rating at 190 watts on my appliance watt meter.  I left it turned on for about an hour, then noticed the power was off.  I double-checked the circuit breakers to be sure that I was not the problem, but all the breakers at the power panel were still engaged.  The electric wall clock in the "aircraft factory" had stopped at 9:20 AM.  The problem was with the local power company down the road somewhere.  I unlocked the hangar door and turned on the "UP" switch so that the hangar door would open as soon as the power could be restored.  It was after 11 AM when I landed at the Chattanooga Airport.

It took longer to fly to the Chattanooga Airport this morning since I had to land from the north on runway 20.  Since I was flying up from the south side, you get the picture.  I landed and was directed to the area where EAA Chapter 150 was setting up a 20x20-foot "tent".  I parked on the south side of the booth and tied down Enterprise for the night.  In the background are a pair of F-15 Eagles from the Missouri Air Guard, two F-16 Falcons from the Arkansas Air Guard, and one FA-18 Hornet with Marine markings.  That red-white tail you see is a Beech T-34 (Bonanza variant) as part of the CAP exhibit. 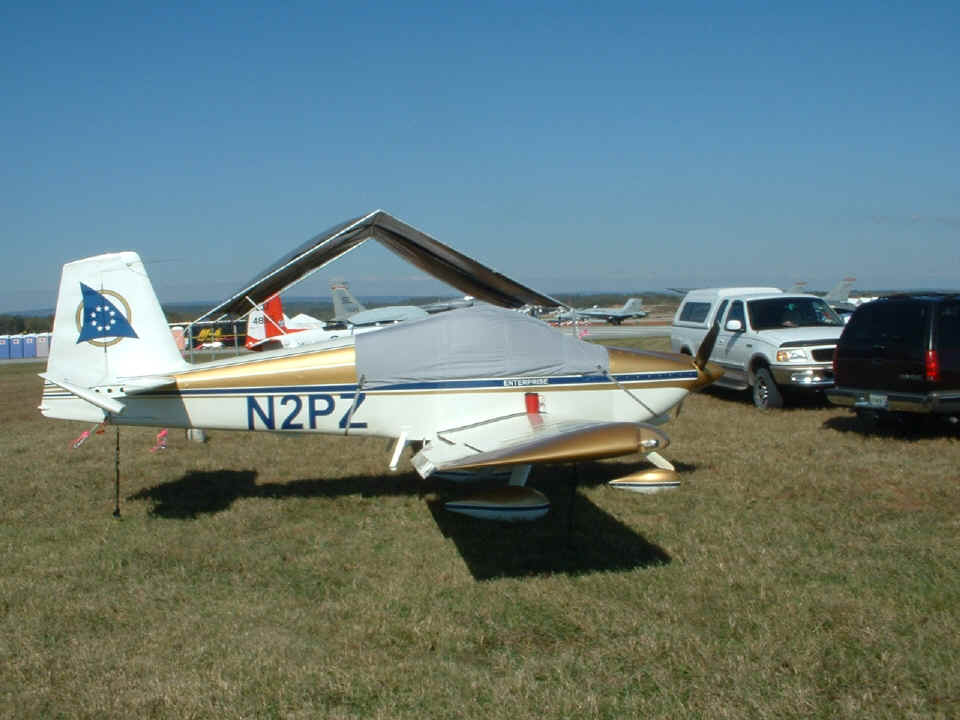 Stepping out in front of my airplane, the view of runway 33 shows all the military jets parked there.  The Navy's Blue Angels are near the center of the photo.   The tail of a KC-135 is at the extreme right edge of the photo.  The other jets I described in the text above are parked near this end of runway 33.  If you look just in front of the F-15 on the left side of the photo, that is J.J. Narus "nose-to-nose" with the Eagle taking pictures.  You may recall that J.J. is the guy building the replica Tri-plane. 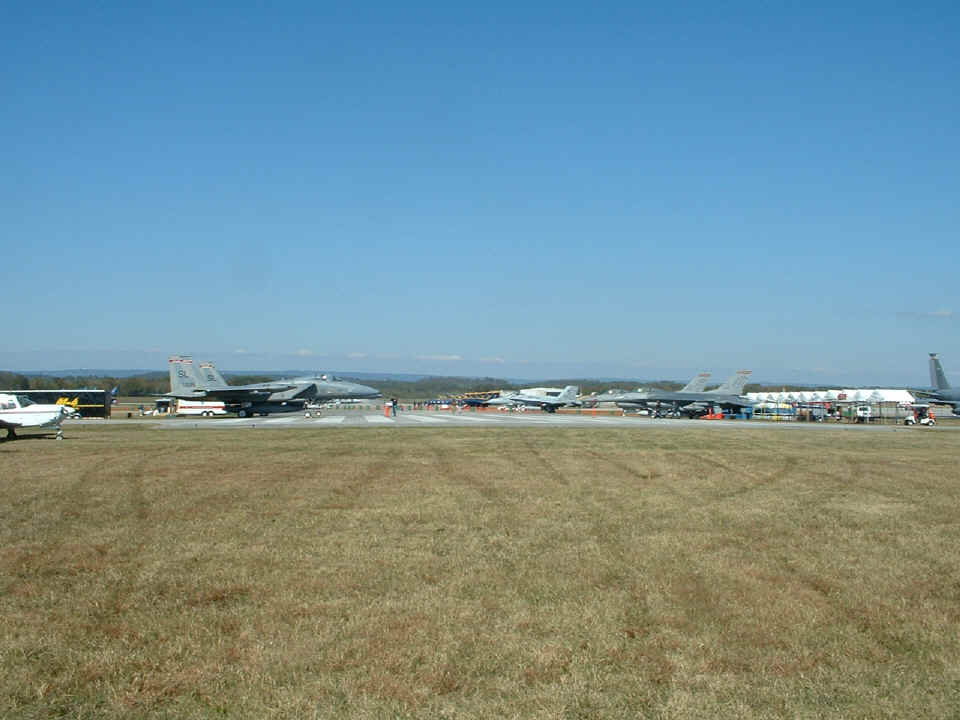 I left the photo above full-sized to show all the details.  You will have to "pan and scan" to see everything, but it is all there.  I will have more for you tomorrow when the crowds arrive and I get into my routine of explaining about amateur-built aircraft.

October 29, 2005:  The first full day of the Chattanooga Air Show was today at Lovell Field (KCHA).  I took this photo from across the field south of runway 33.  I was standing near another EAA member's airplane looking toward the flight line which was in the distance behind my airplane and the other static display booths in the area shown below.  The satellite news truck belongs to the local ABC television network affiliate WTVC.  I spoke with the truck operator and compared notes on the type of digital modulation schemes used today versus 20 years ago when I was building analog versions of these trucks using NTSC FM video modulators. 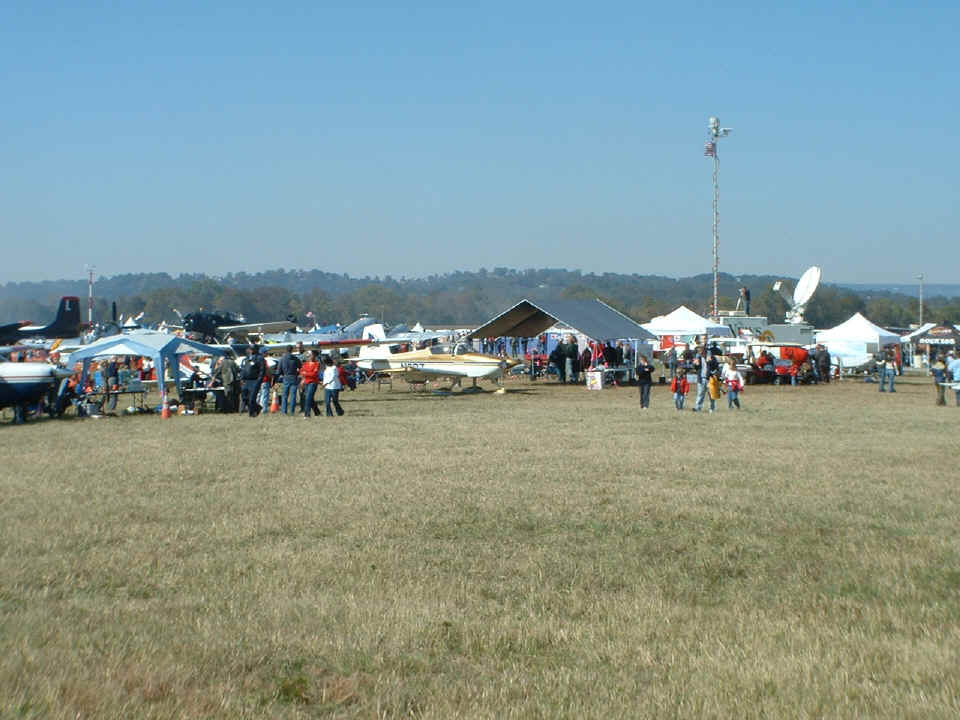 This is one photo I took during an air show performance of a biplane-to-helicopter transfer of a wing walker.  I am leaving this photo full-sized to show the detail of the person climbing onto the helicopter landing skids. 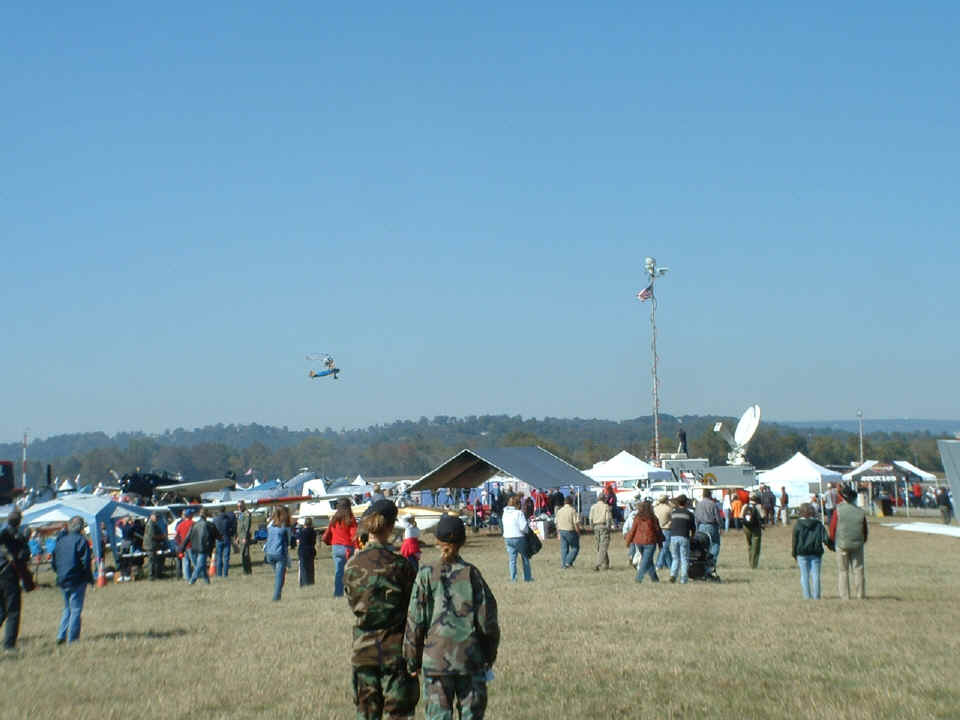 I took this photo as the mass exodus began during the Blue Angels performance.   That leather jacket was donated to our local EAA chapter by the national EAA organization.  We are selling raffle tickets for it as a fund raiser.  We had one pilot today who wanted to join our local chapter.  I talked to a number of pilots and pilot "wannabe's" about building my airplane.  I also passed out a lot of my "Airplane" business cards with my web site address on them.  I have asked each person who got one to send me an email after they view my web site. 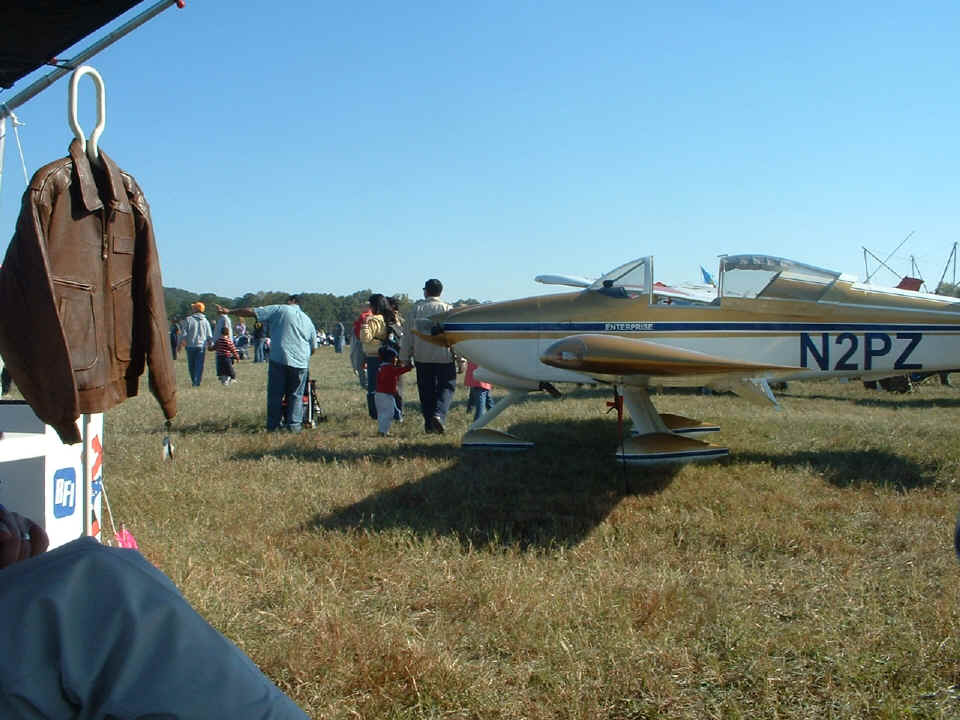 And here is the last photo from today showing Wendell talking with a husband and wife pair of pilots who also have a grass strip in Gordon County, Georgia south of the Dalton Airport (KDNN).

October 30, 2005:  The second and final day of the Chattanooga Air Show.  This picture was taken just as the air show performances began and right after I had my lunch.  Most of the spectators have moved out of this "rear" area to be close to the flight line activities.   This pair of Lancairs were here for both days to attract attention.  The green airplane in the back belongs to Ron Lowrey.  If you have not seen him in another part of this web site, he is the pilot who published the book retracing the journey of the Lewis and Clark expedition across the USA.  He also had an article published in the EAA national magazine about the adventure.  That very "little" yellow airplane sitting in front of the orange fence is a Cassutt Sport Racer built by EAA 150 chapter member Clarence Andrews.  Ron and Clarence both fly from the Collegedale Airport (3M3). 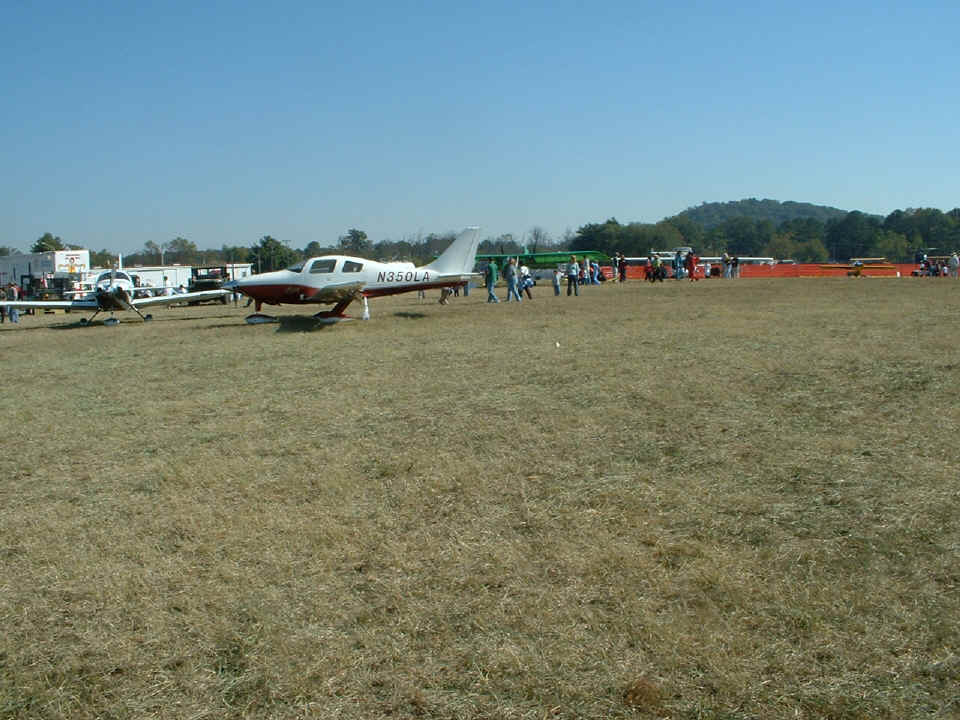 The two gliders were brought in by trailer from the Chilhowie Gliderport (92A) near Benton, Tennessee. 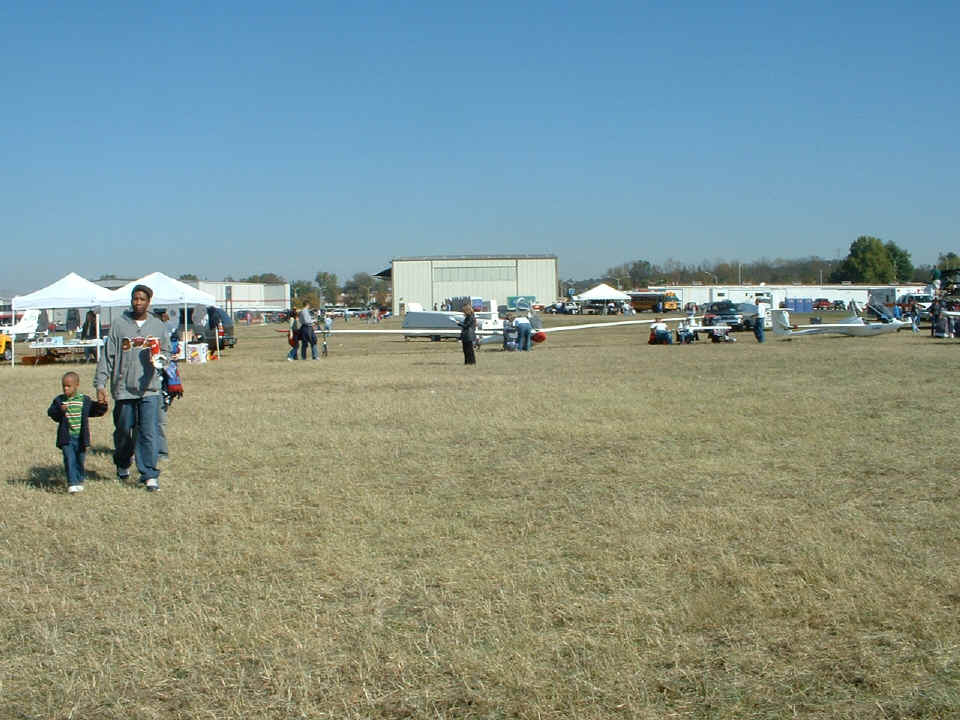 Looking a little further to the left reveals a FEDEX Boeing 727 air freighter and the tail of a US Air Force KC-135 jet tanker.  The green dome in the background is the rotunda of the Chattanooga Airport passenger terminal.  Several times during the day, the air show performances would pause for the arrival or departure of some scheduled airline flights. 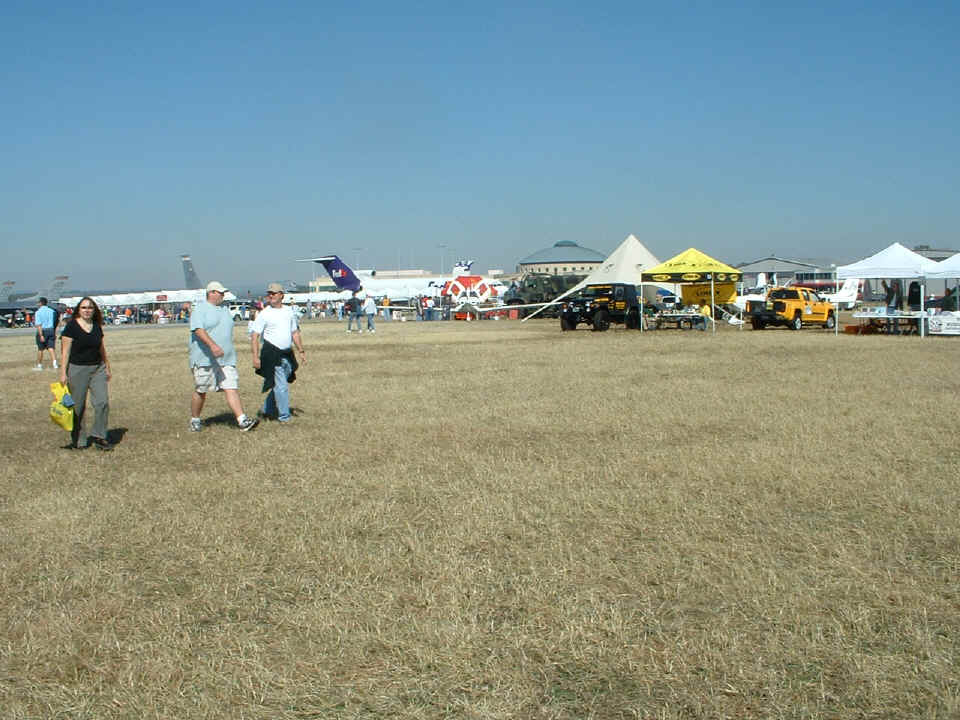