July 4, 2005:  This was a day of flying with some friends down to the Jasper, Georgia airport with Maurice Garner, Mark Devlin, and Travis Bieberitz.  Low clouds and haze kept us on the ground at Collegedale until after lunch.  Travis took some photos of my RV-9A using my camera from the Cessna 172 that was flown by Mark.  This is the first shot he took on the ramp at Collegedale as Maurice looks at my airplane before we took off.  This is also the first day that I have both seats installed and carried a passenger aloft.  The takeoff was just like the ones I did when I had my transition training in the RV-6A at Scappoose, Oregon with Mike Seager.  Today's flights were marginal VFR in some areas once we got started. 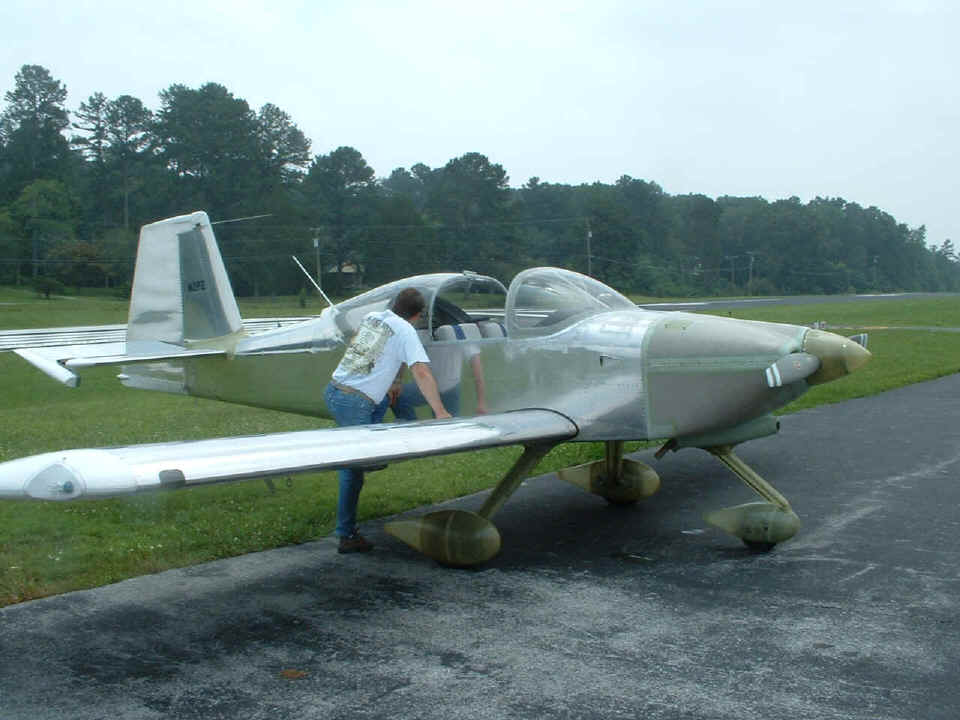 This first shot from the Cessna shows me off his right wing.  Travis pushed the zoom lens all the way out for this shot.  I have left it at full resolution so as not to miss any details.  You may have to pan your view of these larger photos with the slider bar at the bottom of your web browser window.  The radar transponder antenna is visible just behind the dual exhaust stacks.  The three flap hinges on each wing are clearly visible under the wings along with the two steps, one on each side of the fuselage behind the wings.  That bulge on the bottom aft fuselageabout 1/3 of the way back is the 75 MHz marker beacon antenna.  I have yet to hear any of those signals since I have not yet flown any ILS practice approaches. 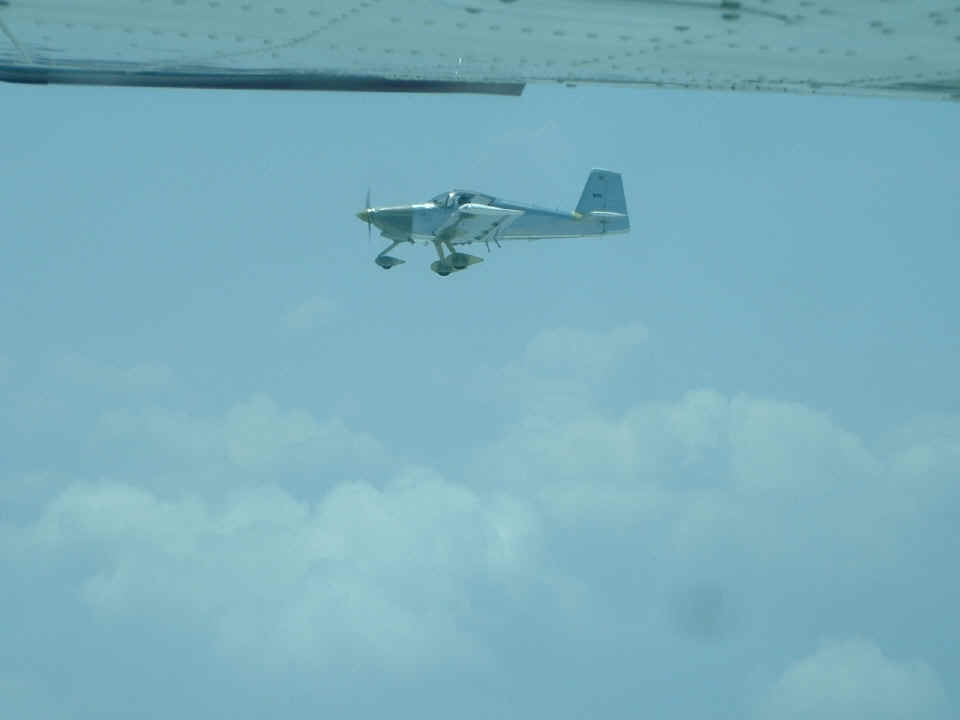 I moved around to different positions to take some videos of the 172 as well as give Travis some other views of N2PZ.  I let Maurice keep the airplane level when I was getting the video camera ready.  Then I gave the video camera to Maurice and he shot a short bit of footage.  The photo below shot by Travis shows the way things looked with the camera adjusted for a wider field of view.  Mark and I were talking on the air-to-air frequency of 122.75 MHz during the flight. 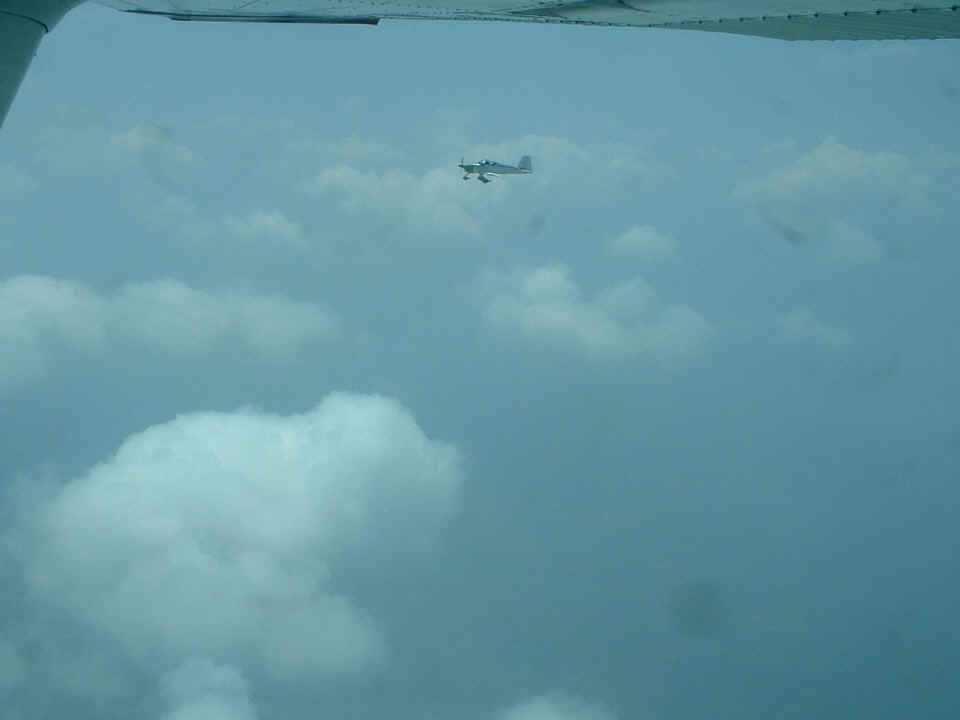 I backed off a bit on the power to allow this shot to be taken.  At this angle, the Cessna wing is no longer in the picture.  Travis was also shooting some video footage with his own camcorder. 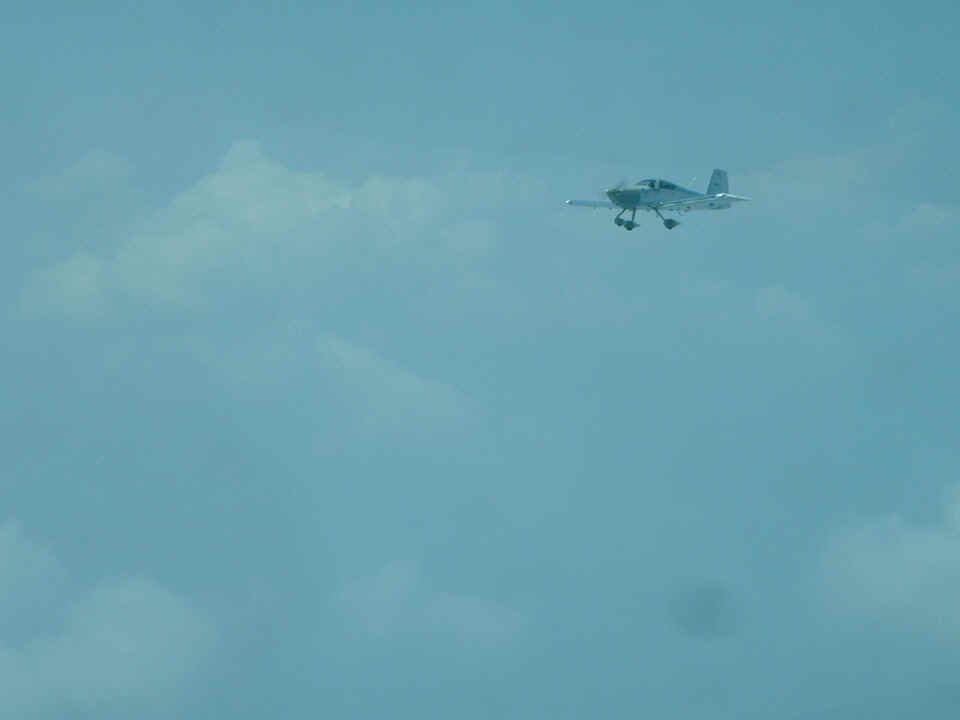 And here is the last air-to-air shot of the day since we had to drop down below the scattered layer of clouds for the last 15 miles to the Pickens County Airport near Jasper, Georgia (KJZP). 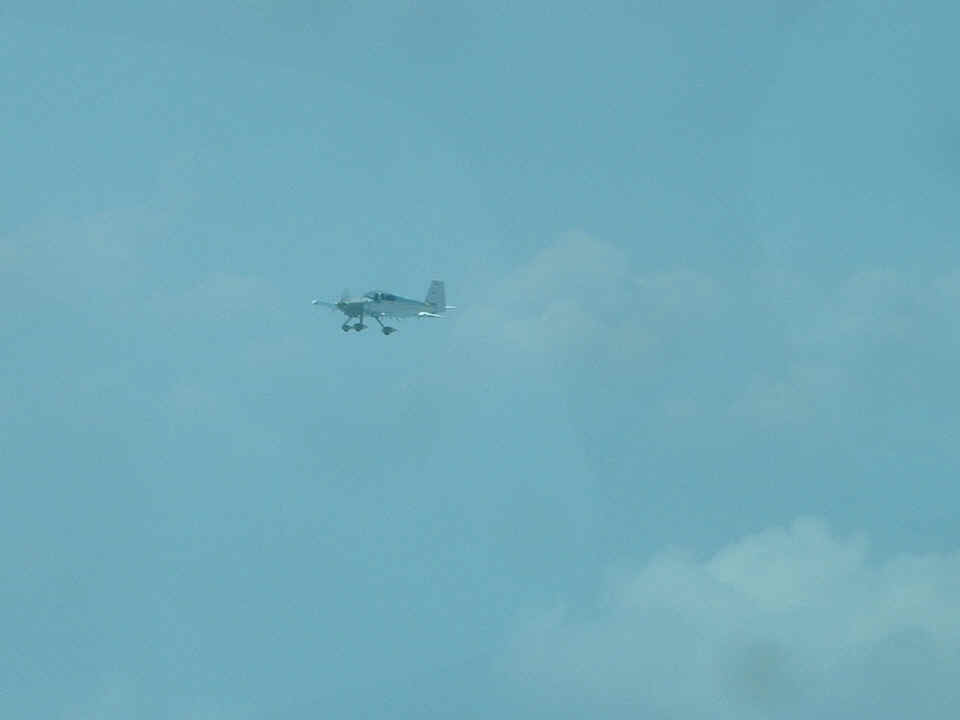 On the return flight we passed the Dalton airport when the haze was really thick.  We went by at pattern altitude and I made sure we were East of the field about 1 mile to clear any local traffic.  There was nobody up there but our flight of two and we talked with Dalton Unicom when we were still five miles away inbound through their area.  The guys wanted to see where I was based, so as the haze cleared south of Chattanooga, I led the way with my GPS to show Mark where I keep my airplane these days.  I wanted to take a snap shot of Travis back at the FBO at Collegedale.  I gave him my card and he promised to burn me a copy of his video of my airplane on a DVD.   Travis rode with me from Jasper back to Collegedale. 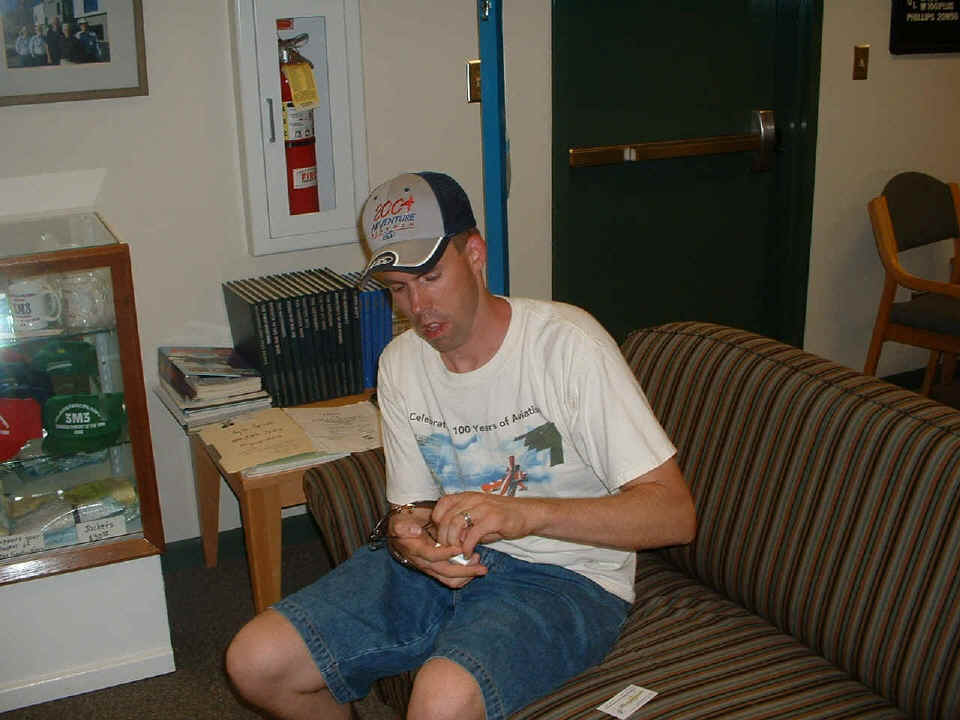 After Travis and Maurice headed for home, I gave Mark a ride in my airplane and he got some stick time at different flight modes of climb and cruise at altitudes up to 10,500 feet.  I did the take off and landing since I am the only one insured to fly the airplane.  I am pleased to report that all FIVE of my landings today were very good ones (for a change).  By the time I got back to my new home at Wendell Folks grass strip, it was 7 PM and about 20 minutes later, it started to rain.  I logged 4.5 hours today and had some new experiences with three other pilots.  It was a good day!  And tomorrow the airplane goes on a very short flight to the paint shop for two weeks.  I will keep you posted as the process gets started!