March 2, 2005:  Here is the prop back on the engine with a few screws in the fiberglass cone.  I have left myself a note to remind me that the six bolts that hold the prop to the crankshaft flange need to be torqued properly, and safety wire added to those bolts and the four bolts that hold the smaller spinner bulkhead to the front of the prop housing inside the fiberglass cone.  It took a long time to take that prop off, do the work, then put it back in place on the engine.  While I had the cowl off the airplane, I also trimmed up the baffle in two places identified in yesterday's session, and sanded the carburetor air inlet area of the lower cowl for a smoother transition.  That area will get some additional epoxy resin the next time I mix up a batch for cowl and windshield work. 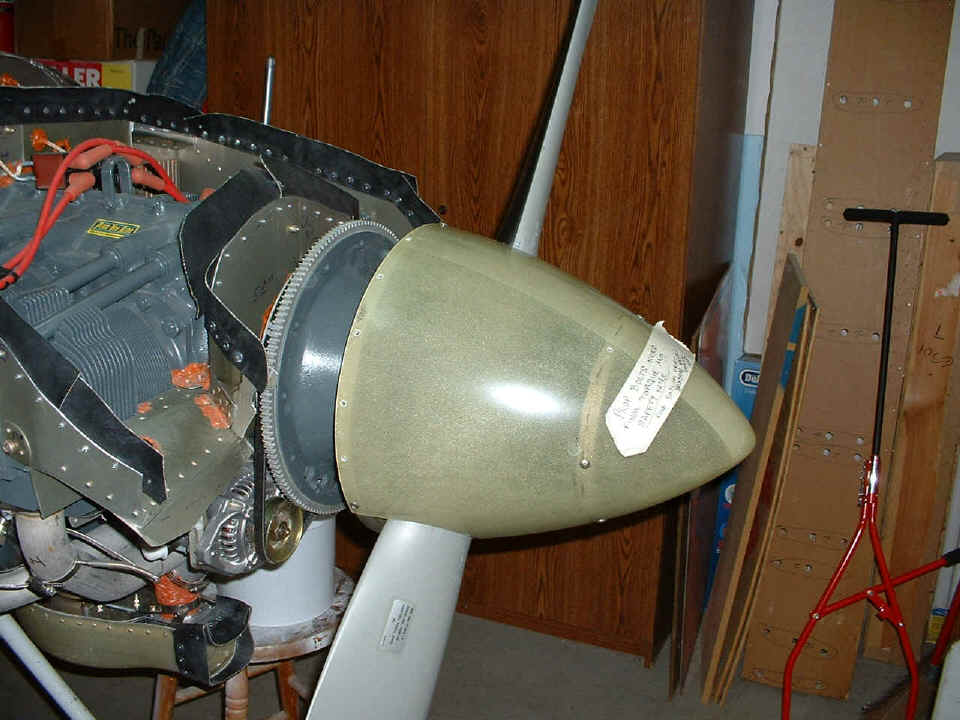 The work sessions today totalled 3.5 hours.  It seemed like half of it was getting the prop off and then back on.  The total aircraft construction time for the project now stands at 1688.2 hours. With all the shop prep work at the beginning, the total time is 1757.2 hours.

I brought the plexiglass windshield into the kitchen to keep it warm overnight.   Tomorrow it will get drilled to the roll bar and clipped to the fuselage skin.   The temperature outside last night went down to 26 degrees F.  The temp in the garage this morning was 52 degrees F.  By the time I started work around noon, the temp was up to 70F due to the box fan and electric oil heater in the open kitchen door to the garage.  The plexiglass wants to be warm for drilling holes and countersinking those holes for mounting screws.

March 3, 2005:  After much consideration of exact placement of the plexiglass windshield on the roll bar and its position to the closed and locked canopy, I drilled the #40 holes in the plexiglass and the steel rol bar.  Now that the windshield was held firmly in place with clecoes, I checked the last areas of the aft edge of the plexi that would need to be sanded to even out the clearance between the plexi on the canopy and the windshield. 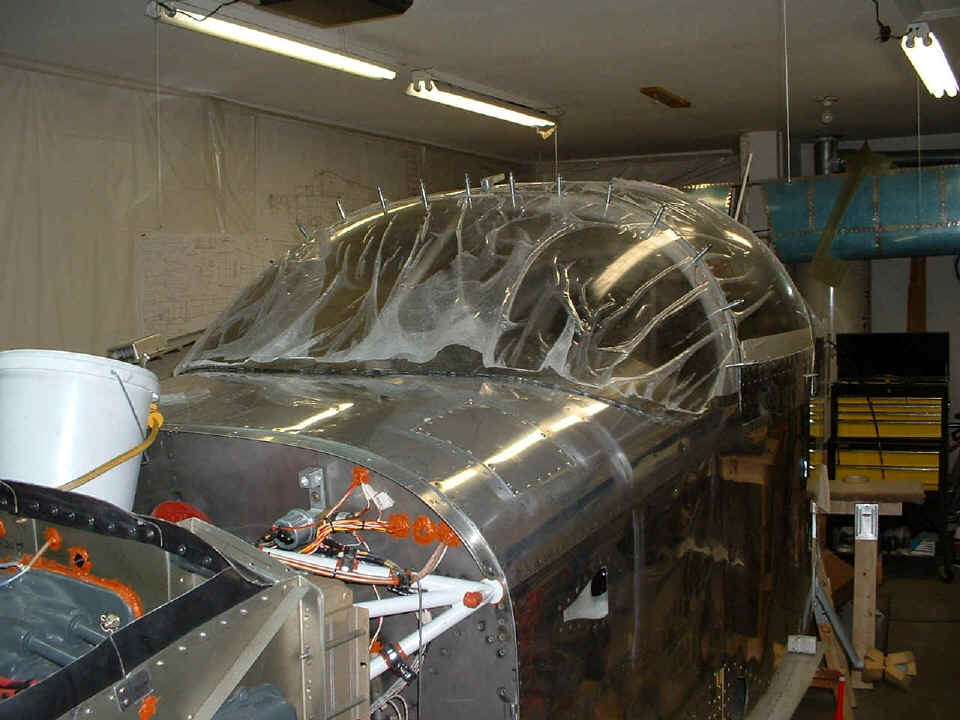 I also peeled of the protective plastic on the inside of the windshield before the drilling and used masking tape on the roll bar as an indicator where the plexi hit the roll bar for drilling.  As I drilled each new hole, I would assess whether or not it needed any spacer washers.  Each hole would get the number of spacers, from 1 to 3 as needed, to properly align the two plexi layers to each other.  I used my Sharpie pen to put that number on the plexi next to the hole.  That area will be covered by several layers of fiberglass and epoxy resin when the installation is completed.

Up close and personal with a 6-32 tapped hole in the roll bar.  I managed to break my tap before tapping all the holes.  I figured that was a good time to stop for the night.  I did taper the edge of the plexi with my Dremel sanding drum where it meets the F7106 forward top skin.  I also cut six aluminum clips that will hold the forward/bottom edge of the windshield to the F7106 before the layers of fiberglass and resin are put in place. 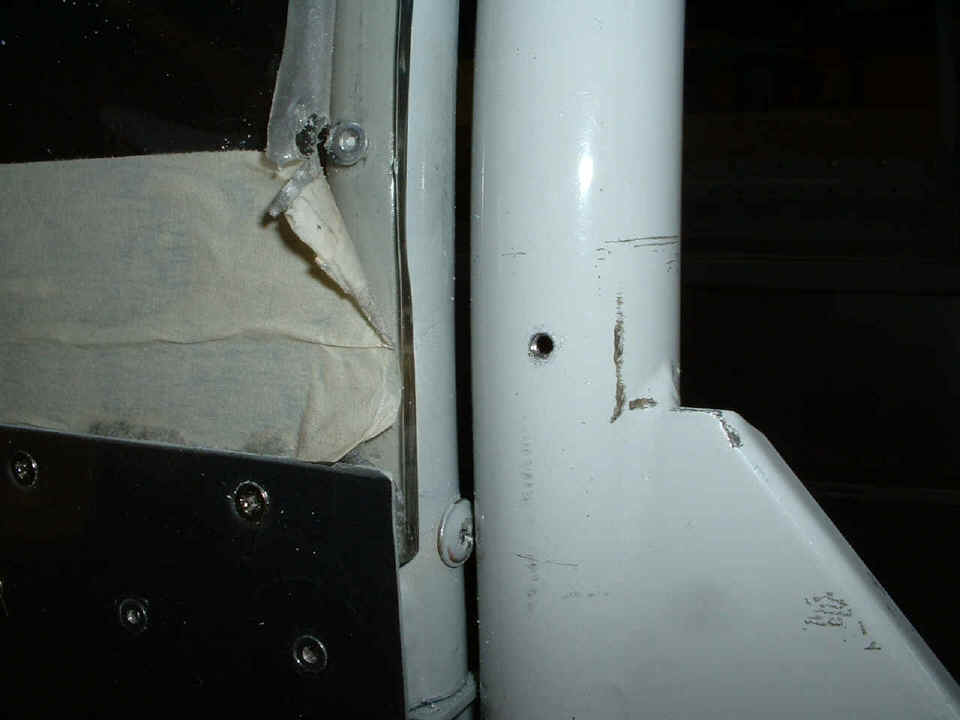 Along the AFT edge of the windshield, the overlapped layers of fiberglass will extend up to half an inch over the sliding canopy.  I have suitable tape to cover the canopy, and a suitable wax to put on it for proper separation of the epoxy and fiberglass layers from the canopy when everything is cured and ready for sanding.

March 4, 2005: I had to go to the hardware store for a new 6-32 tap to finish the holes in the roll bar.  I sanded and scuffed the surface of the F7016 forward top skin in the area where paint and fiber glass work will be happening.  I also countersinked the plexiglass windshield and enlarged the holes with my small unitbit to clear the #6 screws that are now holding the windshield to the roll bar. 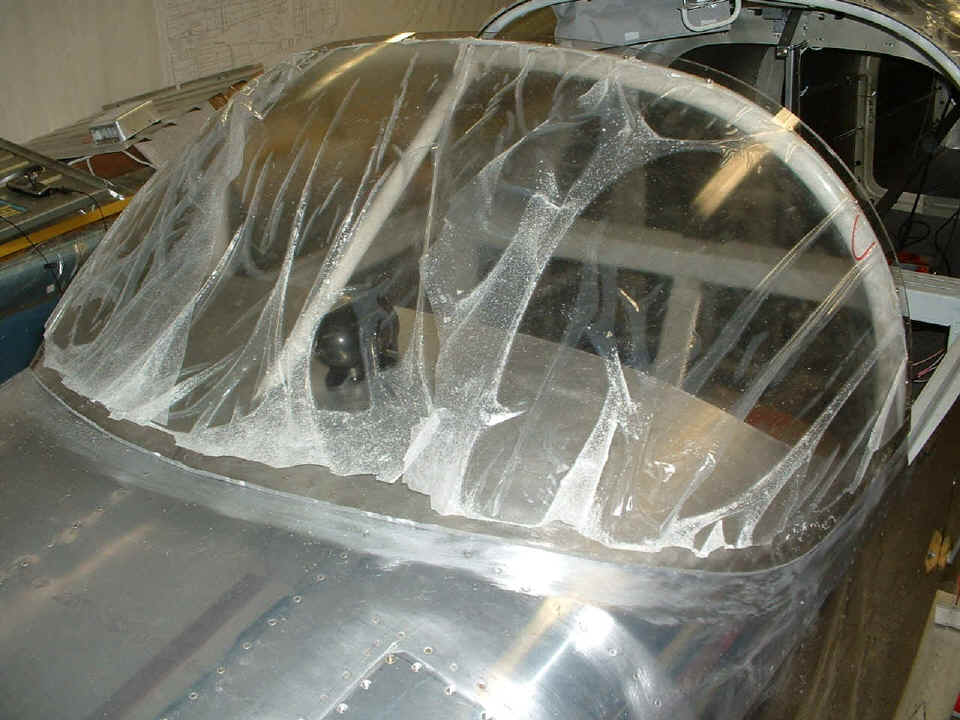 I put the "whiskey" compass on top of the panel to get an idea of where it will be secured to the F7106 skin.  Here is the view from the working side of the compass.  Rich Nadig called to ask if a prospective pilot interested in a Van's RV-9 could stop by for a visit tomorrow.  I will try to take a picture or two when he shows up this time.  I can also get him to help me twist the pitch angle on the Hartzell propeller allowing me to take a measurement needed to build a filler piece of aluminum needed for the spinner. 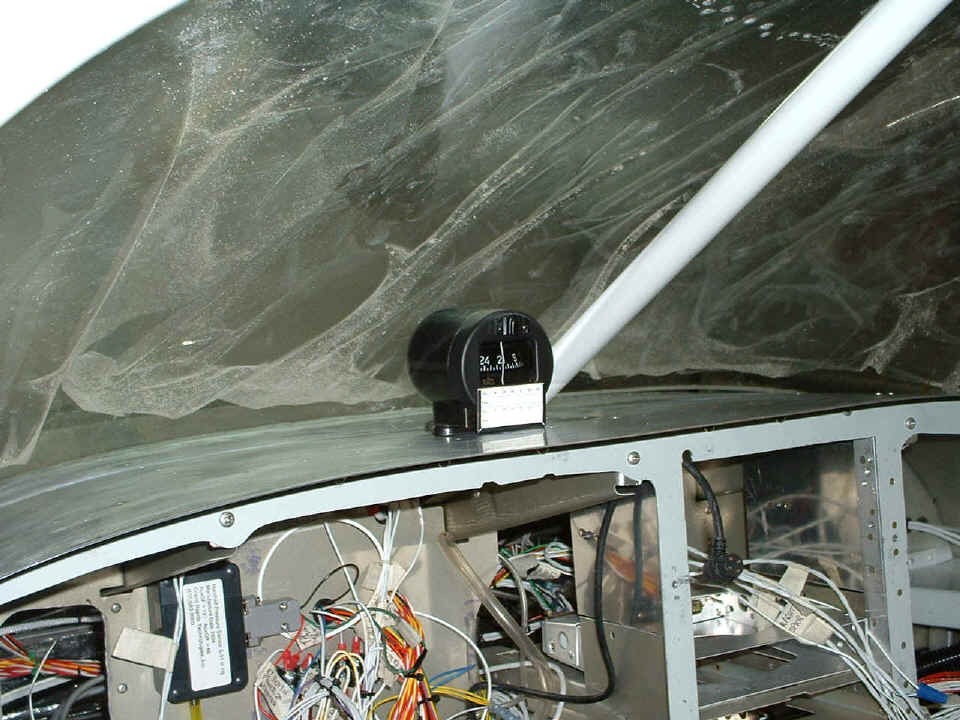 As for that compass above, I have to be sure it will read somewhat accurately where I place it for permanent mounting.  Then it will have a Sharpie outline drawn around the base of it.  The windshield will come off after I draw a line around it on the F7106 skin.  I rubbed the first line off with a sanding block and then the cleaning rag with MEK on it get rid of the sand paper debris and the oil that came from the aluminum rolling mill.  I will need to cover a bunch of stuff inside and around the outside of the windshield mark before painting the the F7106 skin INSIDE the windshield area.  I have a can of flat black spray paint for that job.  I had that windshield brace bar out for sanding the skin, and it will have to come out again before applying the black paint.

March 5, 2005:  I love Saturdays!  Sleep in a bit late, get a lot of work done on the airplane.  I put in the Tygon plastic tubing from the instrument panel to the LEFT wing access port to connect to the pitot tube.  I had to install two 1/2" plastic bushings in the wing spar bulkheads to do that.  I also used about a foot of Tygon tubing to connect to the plastic tubing provided by Van's for the static air line.  Those connections will go to the airspeed indicator when the panel is put back in position.

The weather was beautiful all day, up to the high 60's by mid-afternoon.  With that kind of weather, the garage door opened for ventilation and the black paint went on the area inside the windshield.  Before any paint went on, the masking tape and paper went on to protect against overspray.  I used the windshield line as my guide for taping.  They don't show up in this photo, but there are three holes in the skin for the wet compass.  Before removing the center brace bar, I moved the compass around in that area one more time to get it positioned for easy viewing and reasonably correct on the heading.  I even went out to the street with my hand compass and sighted the centerline of the fuselage again to verify the 208-degree magnetic alignment of the fuselage before marking and drilling the compass mounting holes for the three #6 stainless steel, non-magnetic screws. 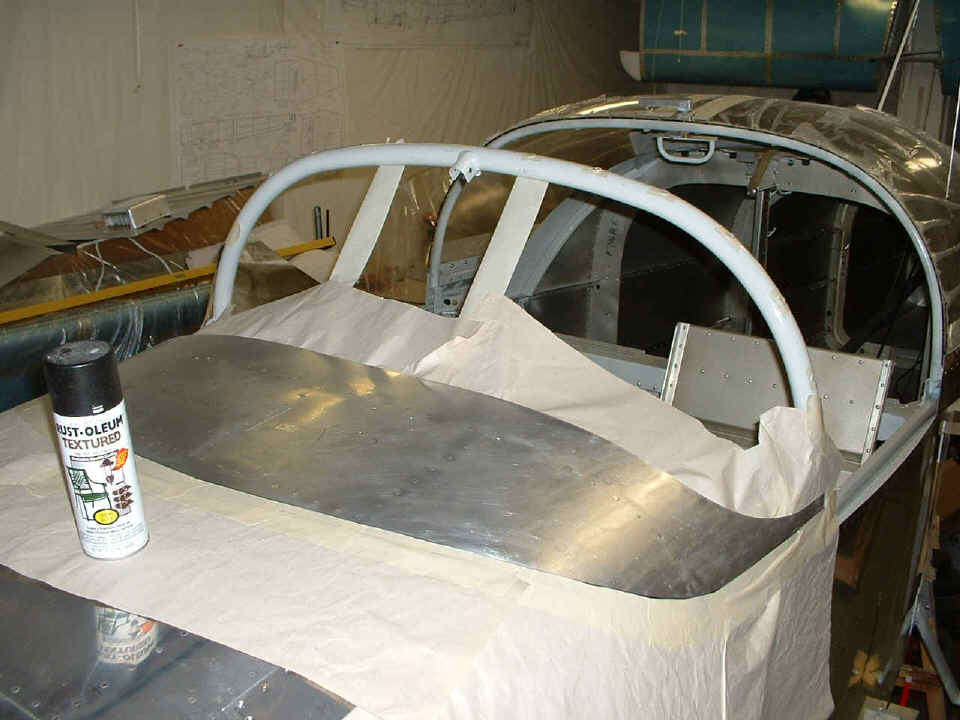 Here is a shot after the first coat of flat black paint. 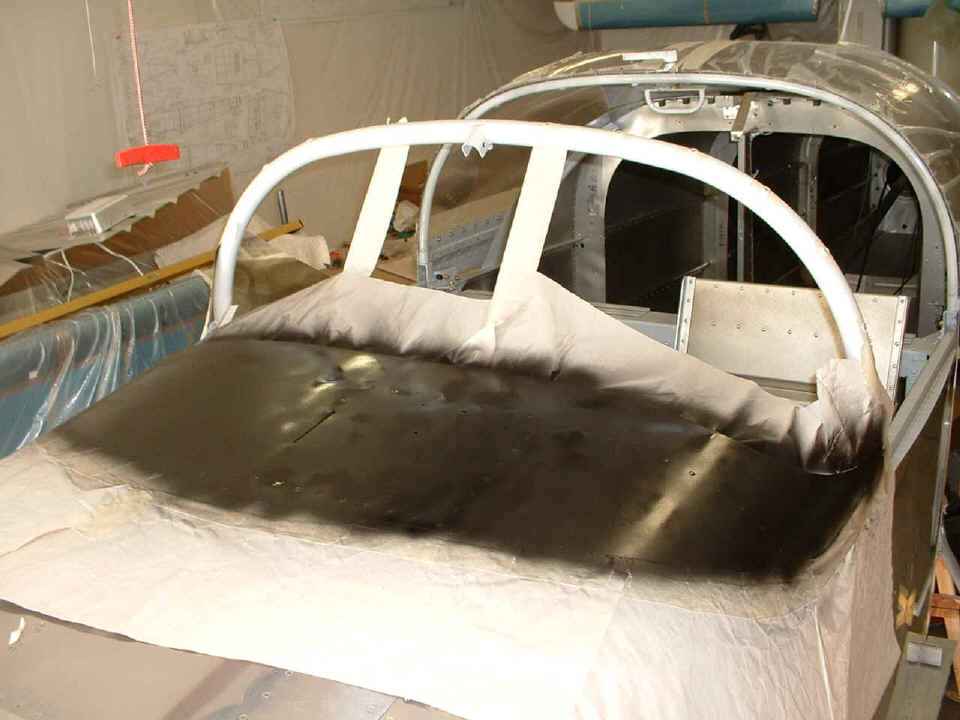 While I was waiting for the first coat of paint to dry, I tried putting the cowl back on to check the minor changes made after I put it on the last time.  Of course there was one more place that needed to be adjusted with my Dremel sanding drum for easy clearance of a baffle near the spinner.  After that change, the lower cowl went on without too much trouble.  I think it has reached its final dimensions. 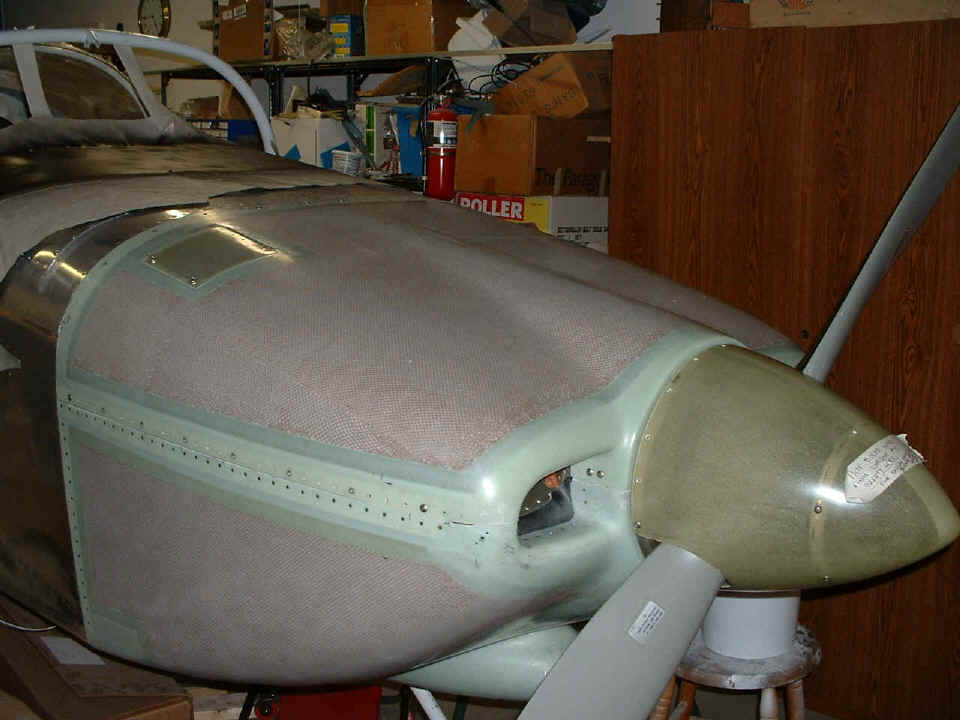 The last thing to do for the day was to put on a second coat of black paint.   I will check on the appearance of the paint in the morning.  The total working time on the airplane stands at 1697.8 hours.  And with eight pictures above, it is time to bring another page to a close.  NEXT time, we post on page 100!