December 2, 2004:  Four hours tonight working with some new parts I received from Van's Aircraft today. As you can see the cowl and the forward top skin are OFF again.  I thought I would start with some thing easy - RIGHT!  The nut on that new black tachometer cable would not clear the right-angle oil filter adapter.  I had to take off the oil filter and the adapter from engine accessory case to start the nut on the tachometer cable port.  Of course, when it came time to secure the adapter to the accessory case, one of the bolts would not go back without using a "claw foot" wrench on the 7/16" head of the one bolt that could not be tightened properly with a combination wrench.  I did not own any claw-foot wrenches until I went to Sears at 8 PM this evening and spent $43.69 for a set from 3/8" up to 1".  All four bolts of the oil filter adapter are secured now.  At the end of that 12-inch tachometer cable is the tach sensor that produces the pulses needed by the EIS engine monitor to display engine RPM.  I will have to fabricate a bracket to attach it to the firewall. 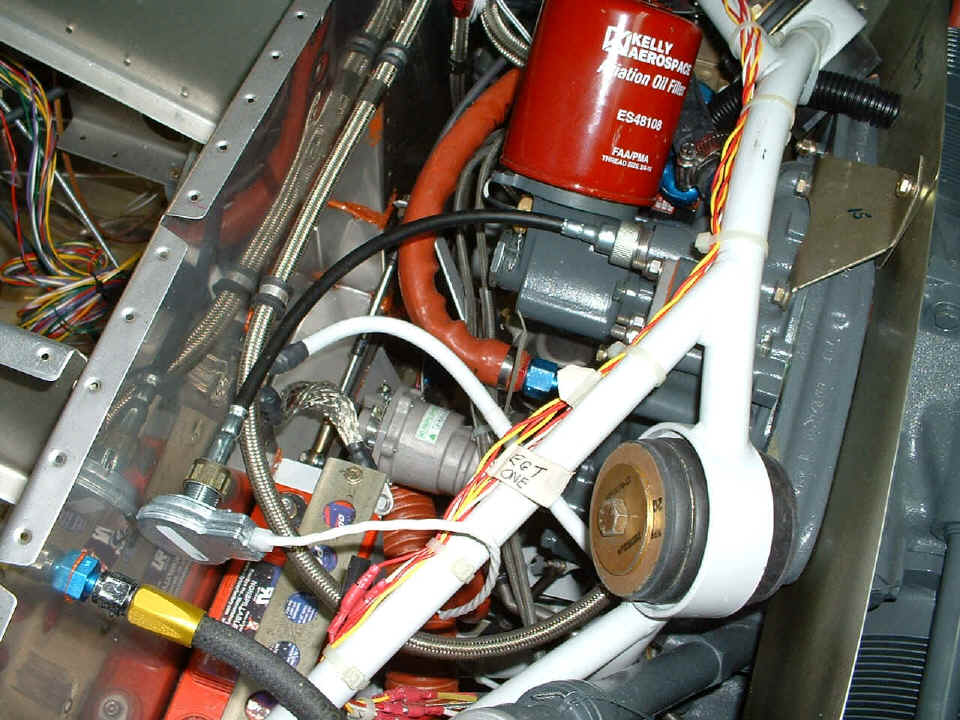 The other "easy installation item" in tonight's work session is the oil pressure switch that runs the HOBBS digital hour meter anytime there is more than 15 PSI of oil pressure.  When the oil pressure is less than that, a light will come on inside the cockpit when I get it wired up.  The pressure switch needed some clearance from the firewall, so the bolts got changed to some that were a bit longer with flat washers between the pressure sensor manifold and the firewall.  The other thing that is new in the photo below is a bit hard to see.  I put an Adel clamp around the aluminum vent tube from the crank case, and another around the engine mount pipe right below that large BLUE right-angle fitting on the oil cooler.  There is a metal strap between the two clamps to keep the rubber hose from the engine accessory case from contacting the side of the oil filter.  I am starting to think more about vibration of everything after seeing David Edgemon's airplane this past Saturday.  I can see many things in this photo and the others that will have to be reworked with "anti-chafing" tape, etc. 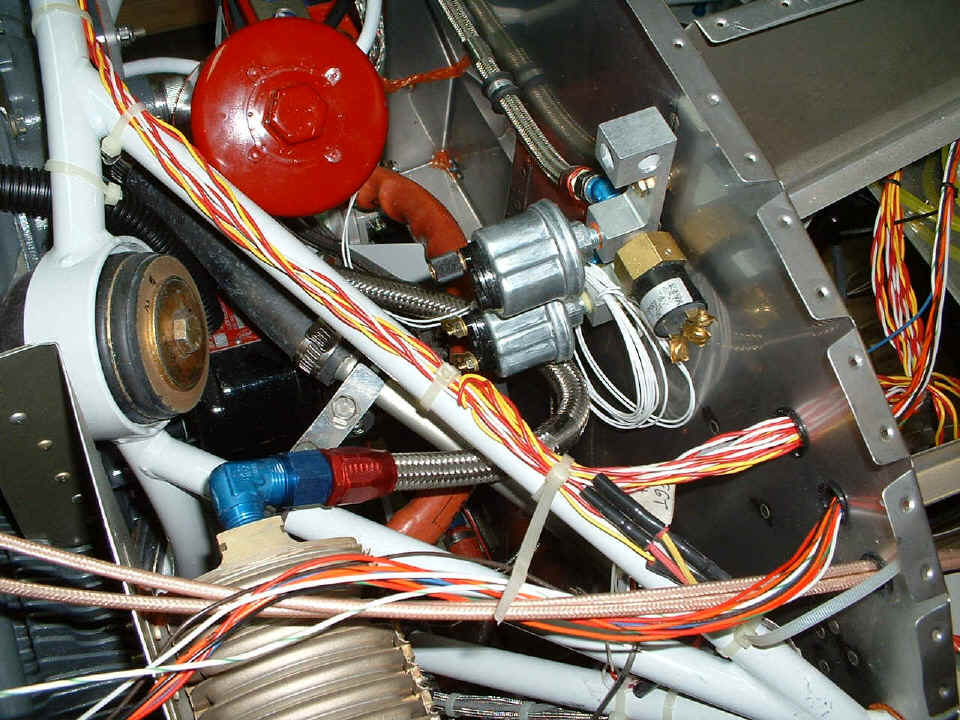 I went through the scrap metal pile and found an angle that I had discarded from another task, and a doubler plate that did not quite come out right for the electric fuel pump.  Together with some "cut out" circles from the road sign instrument panel, I found the way to secure the tach sensor on the front flange of the F7107R rib and the firewall.  The angle was cut a bit shorter and drilled out to accept 3/16" AN-bolts, then riveted to the doubler plate with three #4 rivets.   I used two bolts, washers, and nylok nuts similar to the method of mounting the pressure sensor manifold on the other side of the engine compartment to secure this bracket to the firewall. 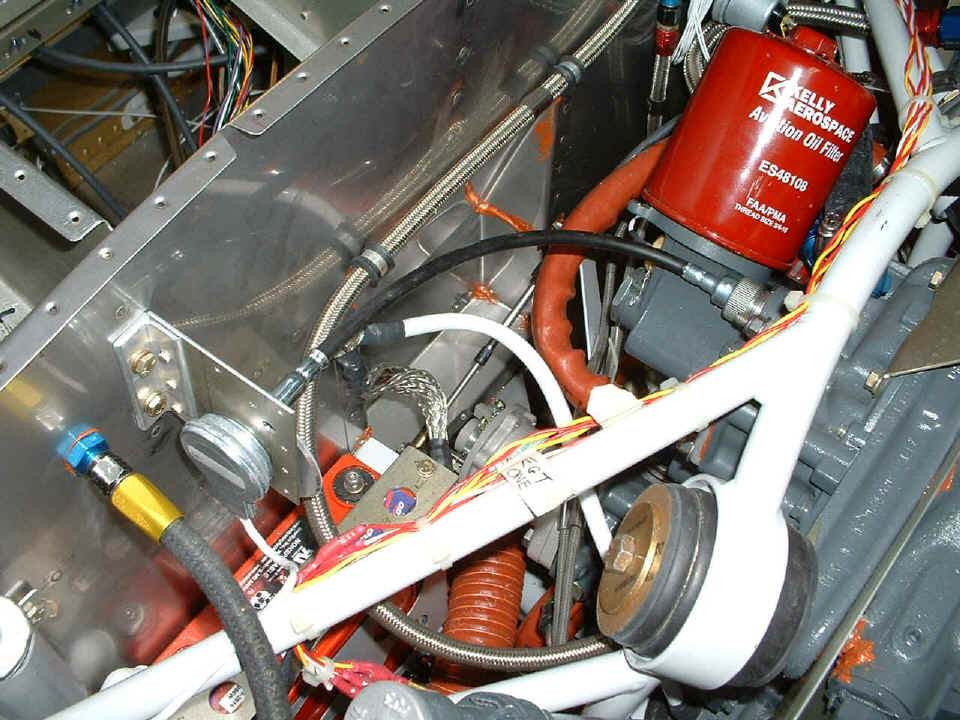 The other side of the tach mounting plate shows the two of the three spacers I made from the cut-out plugs from the instruments on the instrument panel.  I needed a spacer that was 0.3125" thick with a 5/8" hole in it.  Using three of the plugs and another piece of 0.062" plate gave the correct spacing.  Everthing is secure and ready to wire up to the EIS engine monitor. 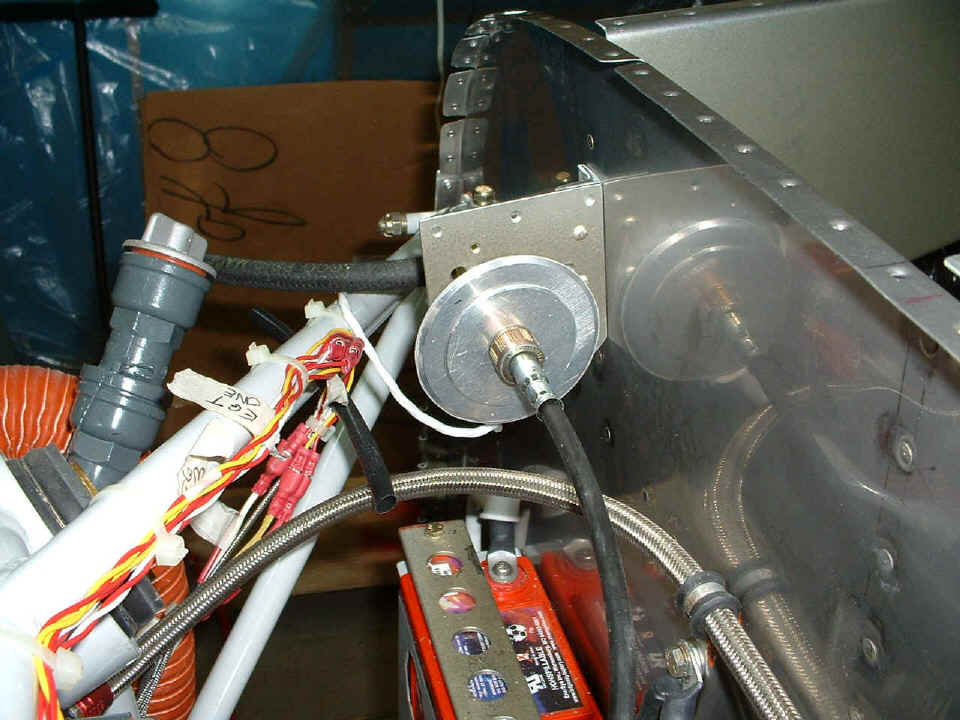 Here are the carb heat muff and the air vent that goes on the top of the filtered air box (FAB).  I bought the two stainless steel hose clamps at Lowe's when I went out to get groceries just after 5 PM.  I will use a short piece of the red heater hose seen in photo above to make the connection from the muff to the vent on top of the FAB.  This stuff will have to wait until I can get the FAB built.  You can see how David Edgemon did his by CLICKING on this LINK. 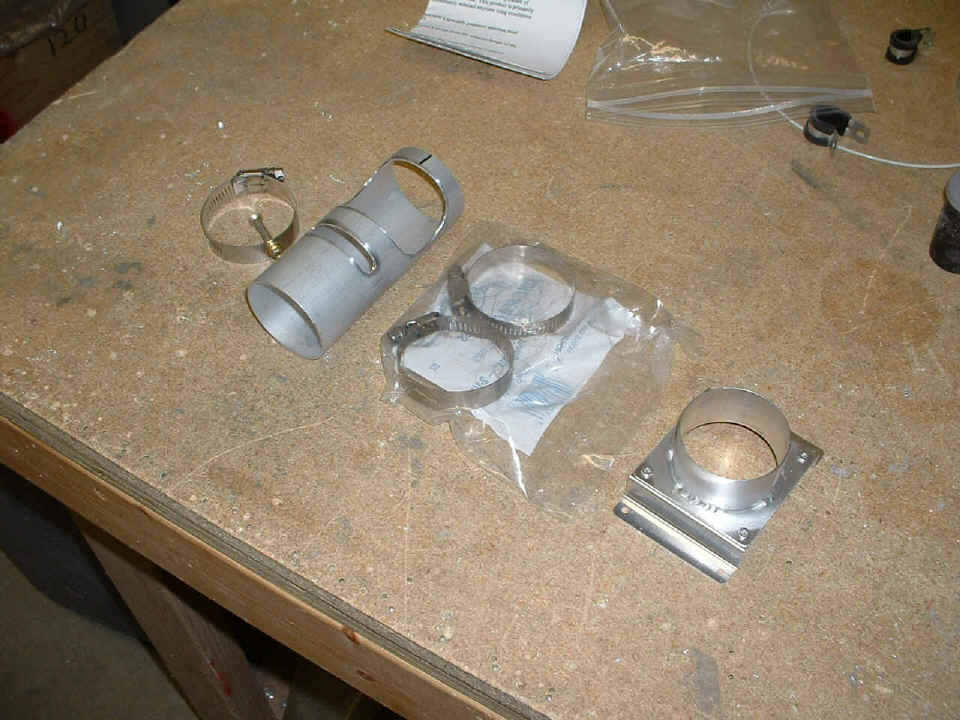 The other news of the day was the mail arriving with my FAA aircraft registration forms.  I will be sending them back tomorrow after getting the form 8050-88 notarized at my bank before the mail goes out at 5 PM.  That is the form that certifies that I build over 51% of this airplane.  In my case, it is 100%.  I had some help on some of the rivets where I could not reach both sides with the gun and bucking bar at the same time, but I was on one side or the other of every rivet, bolt, nut, and screw in the airplane.

December 3, 2004:  No work on the airplane today, but the FAA aircraft registration forms were mailed to Oklahoma City.  I got emails with tracking numbers on my Dynon D-10A which is shipping from Washington State, and also another shipment from Van's Aircraft with the strobe lights and the red and green wing-tip marker lights.

December 4, 2004:  Saturdays are usually good days to get a lot done if I am not off flying or visiting another RV builder.  This day was a day with a lot accomplished.  The day started by mixing up my first batch of epoxy and putting the upper air inlet ducts in the upper cowling on my work bench.   You can also see that the side hinge at the right side of the photo is riveted in place.  I drilled holes in between all the rivet holes allowing some of the epoxy that is also there to bleed through for a better bond of the side hinges.  Both sides are done this way. 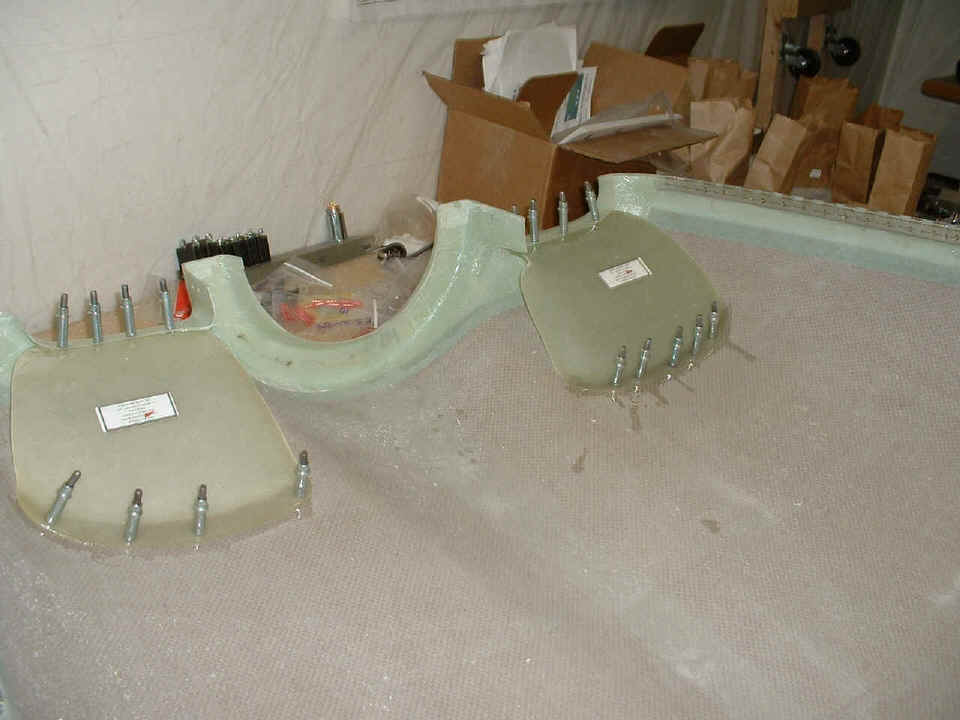 Next came a repair to one of the camloc fasteners which I had put in at an angle not thinking about how the top of the handle would look from the outside.  I drilled out the two rivets and filled the holes with epoxy.  Before doing that, I confirmed that when it is time to drill the new rivet holes, that I would have virgin fiberglass to accept the new rivet holes.  I will also have to grind away from the excess thickness of the fiberglass from the factory molding of the area where the fastener needs to be located.  You can also see how I secured the end of the rod in the hinge. 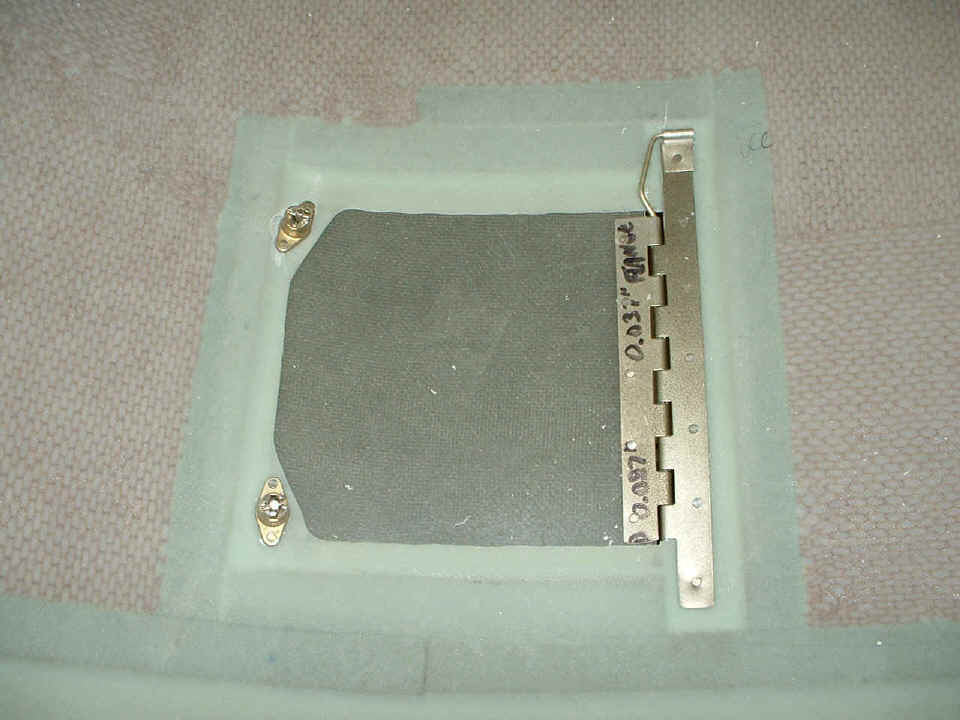 The last picture for this page shows some trimming I did to clear the platenuts on the lower cowl from the baffles on the right side of the ring gear.  I had to do this to the other side also. 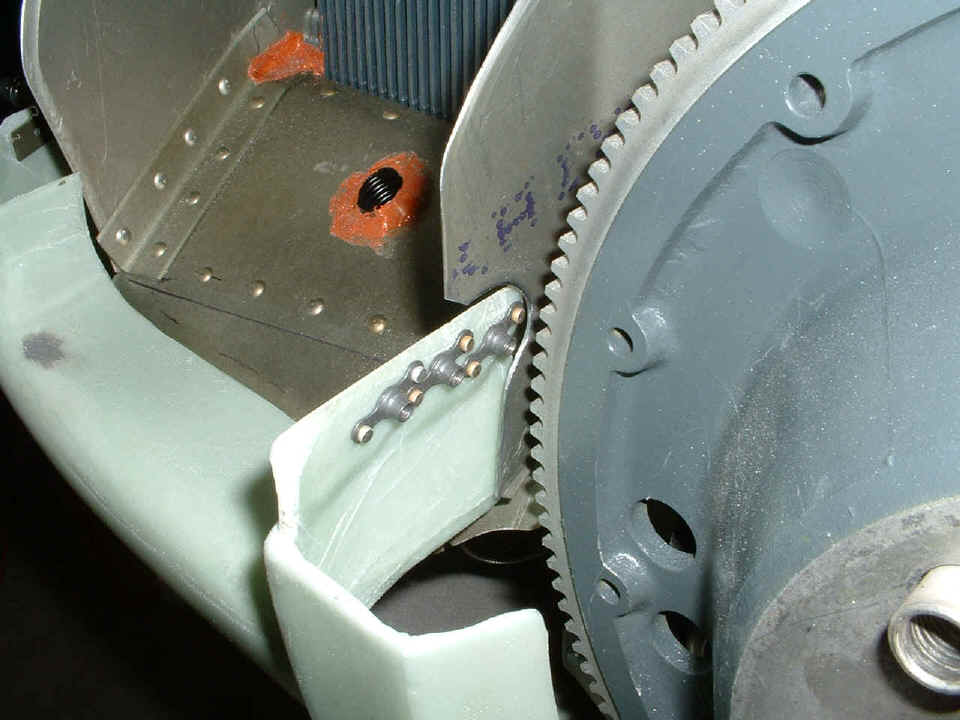