December 26, 2003:  Not much work today, but I did go shopping for some odds & ends.  I went looking at Lowe's for some blank aluminum panel and found that a 12" x 18" piece was around $29.  I passed on that, but did pick up some stainless steel eyebolts for tie downs.  I also bought a lock which should be used on the canopy when the time comes.  That should be in March/April time frame.  I went to a surplus salvage place called "The Junkman's Son" in my home town of Dalton, Georgia and found a good piece of aluminum for building modular instrument panels.  Since I am building a sliding canopy, I want to be able to remove and service sections of the instrument panel easily.  I found a 36" x 36" road construction sign at the surplus store.  It is 0.075" thick aluminum and I got it for $20.  I can make several panels out of this one sign.   It does have day-glow orange on one side, but that can be removed with a wire brush on my electric drill.  I will end up painting it when it is ready to go in the panel.

December 27, 2003:  Gone to Florida on business and flying in an RV-9A near Lumpkin, Georgia.   Click here if you have not seen the pages.

January 3, 2004: Finally got to work on the airplane again.  I took a ride out to Collegedale airport to work with Richard Nadig, the local EAA advisor, and an A&P.  He let me use his shear to cut the road sign down to size for modular instrument panel use.  He welded up a pair of holes in my elevator torque arms.  I found that an error I made was also made by other RV-9 builders.  The holes have since been re-drilled in the correct location and primed again.

January 4, 2004:  Here are the photos showing the work planning on the instrument panel, and the first cuts and drilled holes in the "sign panel" project.  Notice all the black ink lines from my Sharpie marking pen.  And no, there won't be TWO vertical speed dials.  I was just pasting together a panel with place holders as I find and print all the various gauges and dials that will end up on the panel.  I still have to locate an audio panel pix. 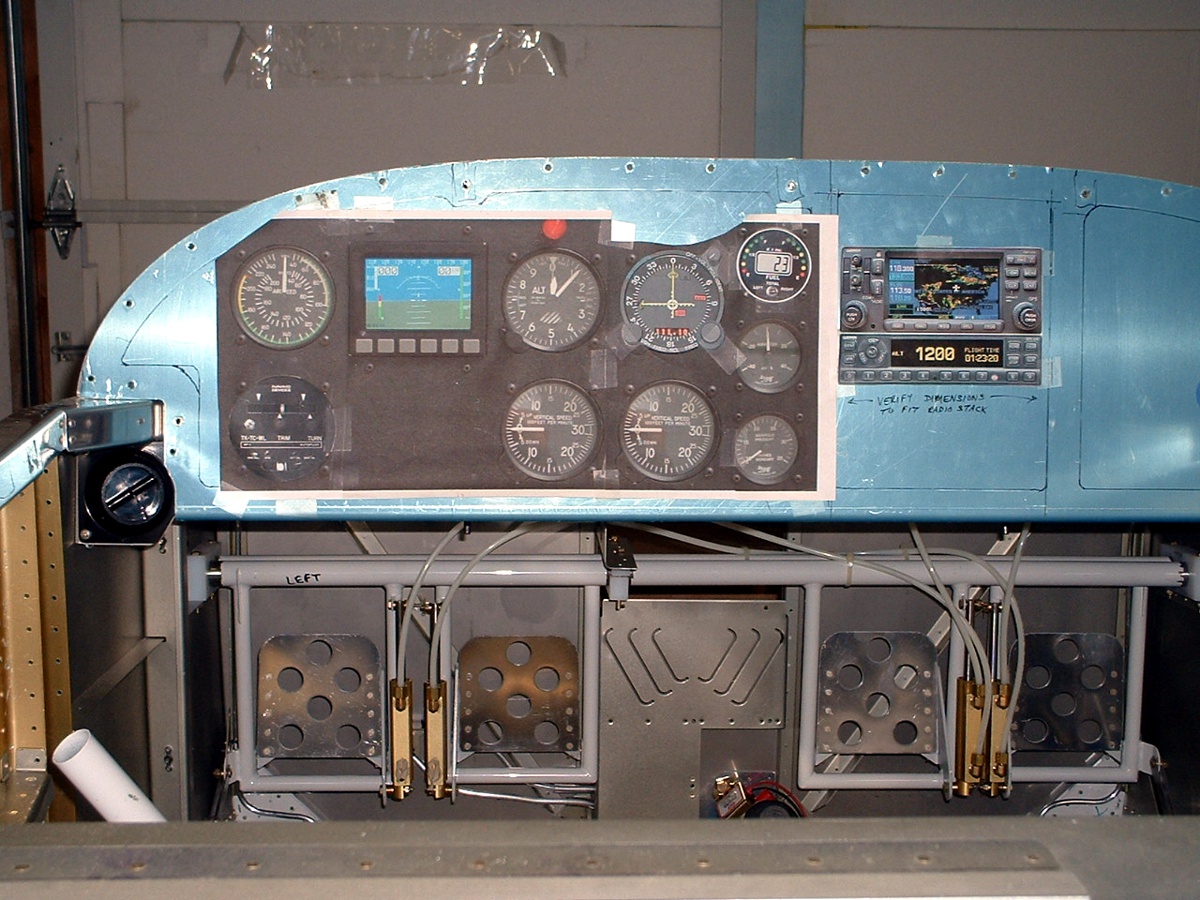 I have drilled the mounting holes on what will become the LEFT side panel.   I have also rounded the edges for the LEFT side as you can see.  When I have accurately located the position of the radio stack, I will take the panel back to Richard Nadig's hangar and shear it to correct width.  At that time, I will make some mounting rails from 3/4" aluminum angle or steel for that matter, and get things ready to take the stack. 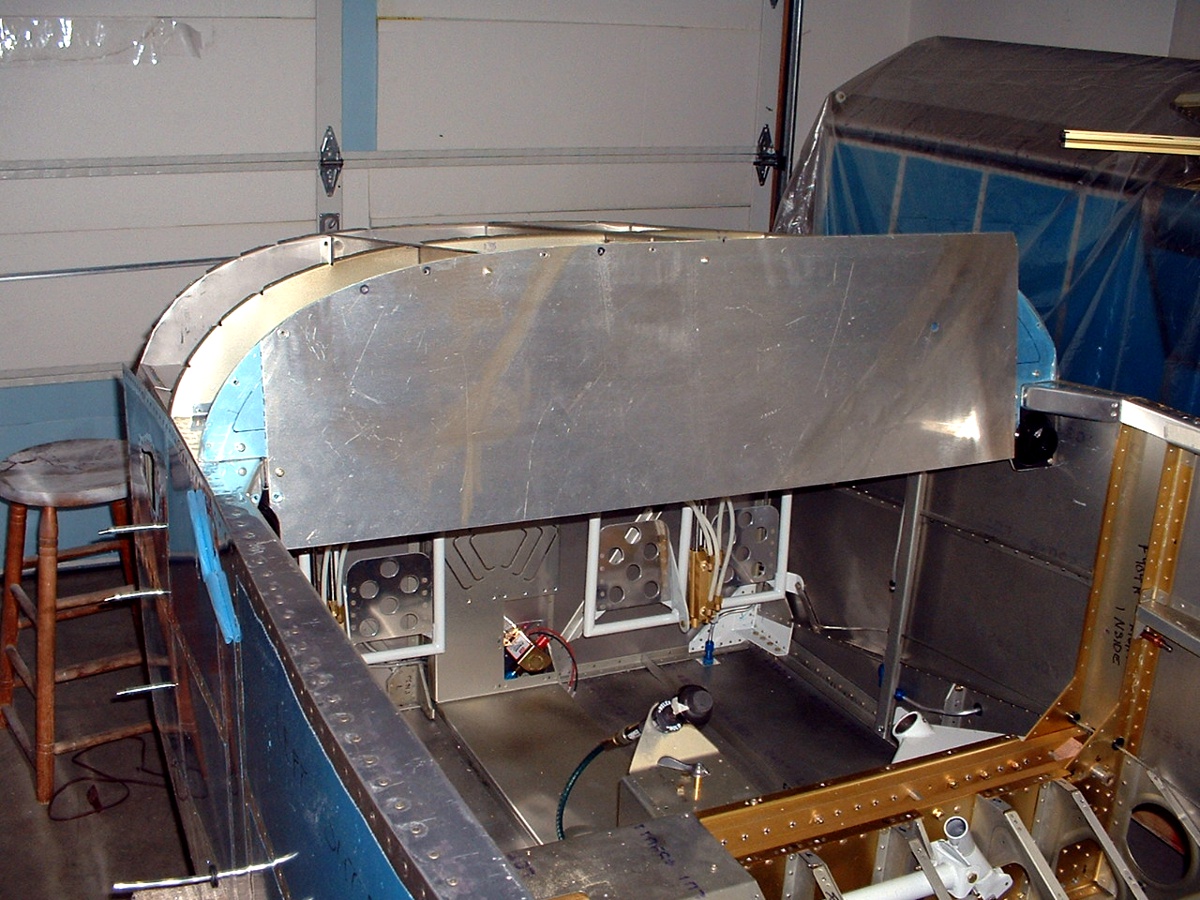 Here is the proof that it really started out as a road construction sign.   You can see where I have started grinding off the orange peel and stick reflective material on the back side.  This should save some weight. 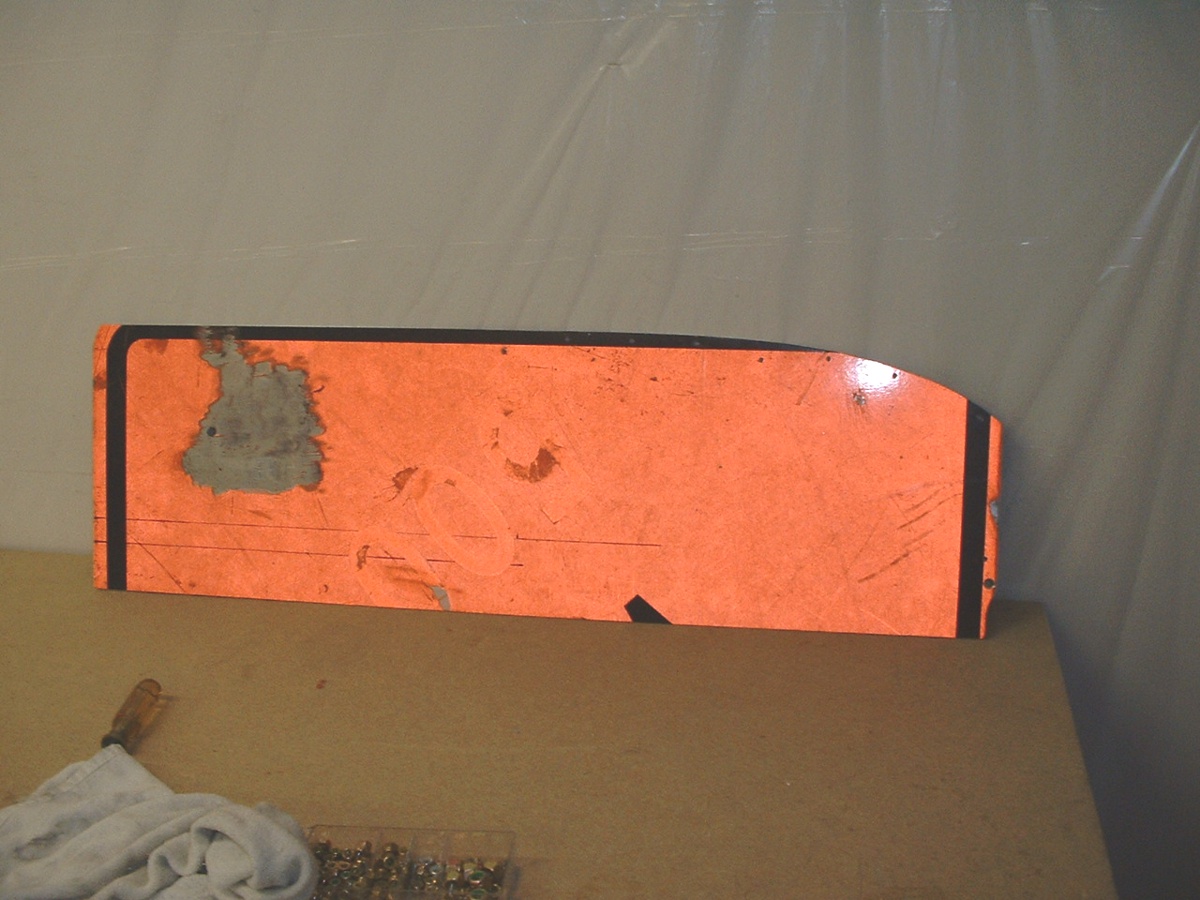 January 5, 2004:  The FedEx package arrived today from Van's containing the three flight instruments I ordered last week.  The airspeed and vertical speed meters were as I ordered.  The altimeter was shipped as a "millibar" calibrated unit instead of one calibrated in "inches".   I shipped it back to Van's for exchange.  I really have to use the computer ordering in the future, rather than the phone/verbal method.

I also managed 3.8 hours of work on cutting out the LEFT side of the original panel from Van's kit to accept the sub-panel I am building.  I had drilled several 5/16" holes near the "corners" of the cutout area, then put the panel on my Dremel scroll saw to cut along the lines that I had drawn on the panel.  Here you see it clamped in my bench vise during the filing and deburring process.  I also finished drilling all the matching holes in the sub-panel as well. 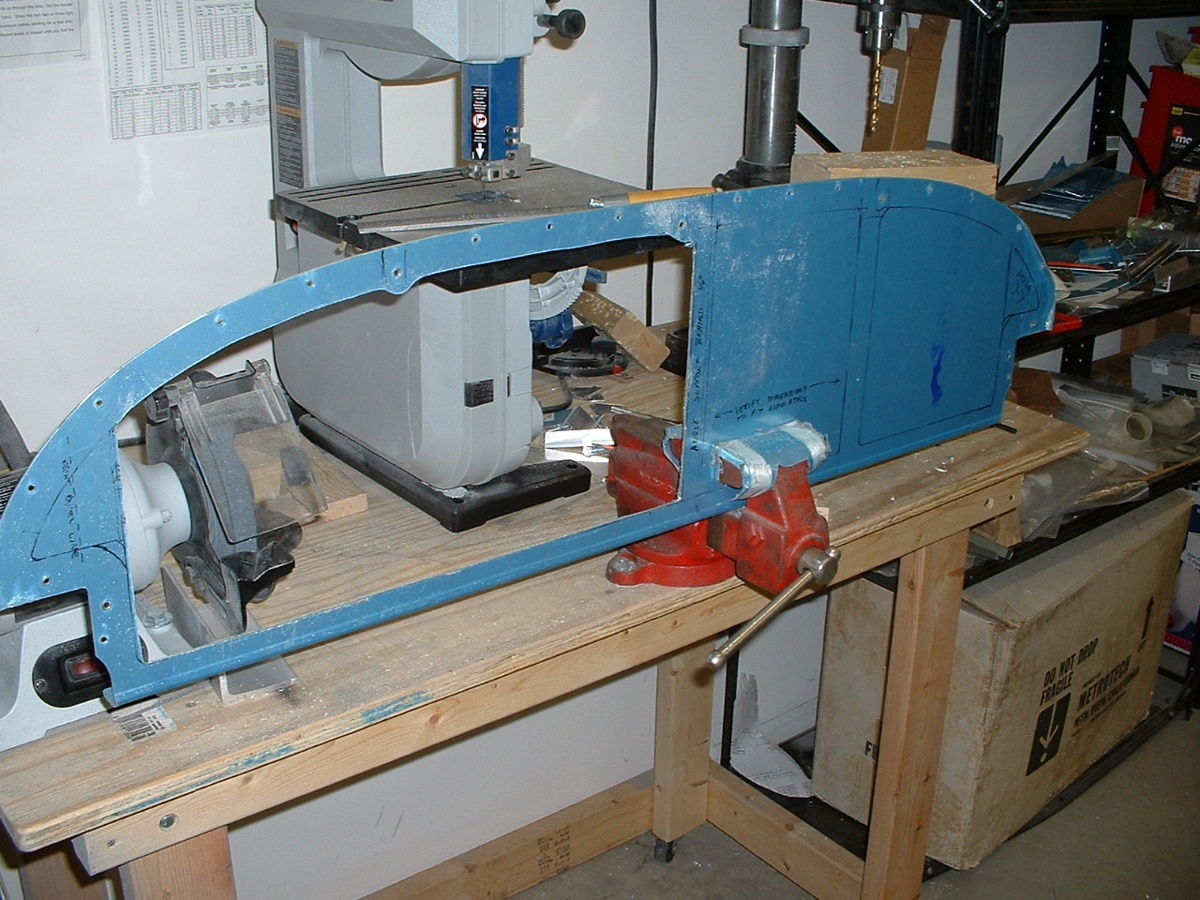 I realized that I had some heavy duty cardboard that would make a good test panel to confirm clearance of my instruments before I actually carve up my sub-panel that I have been working on the past few days.  You can see that I have used this cardboard for other purposes.  I have enough cardboard to do this experiment several times to be sure that I am happy with the final layout. 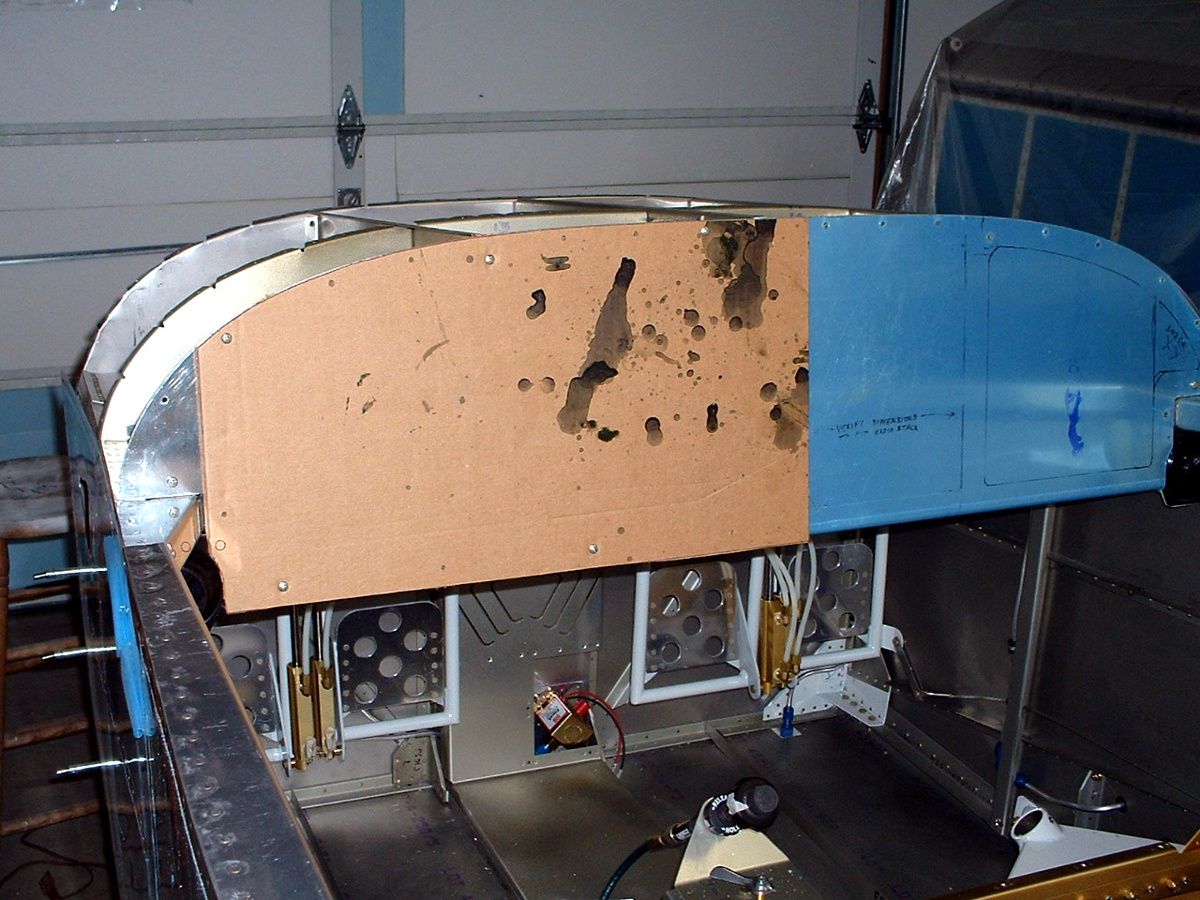 Of course, the "back side" of the cardboard is pristine.  I also received a quantity of 30 K1000-08 steel plate nuts in today's shipment from Van's.   You can see a few of them already installed in the bottom of the panel.  They will help hold the sub-panel to the panel frame.  At the left side of this photo, you can see where I have drilled the hole for two more plate nuts in the panel.  That is the location of the 3/4" x 3/4" x 0.063" aluminum angle which will serve as one mounting rail for the center avionics stack of radios, transponder, etc.  Once I located the vertical angle/mounting rail, I was able to define the full width of the sub-panel and marked it to be sheared when I can get back out the Rich Nadig's hangar at the Collegedale airport. 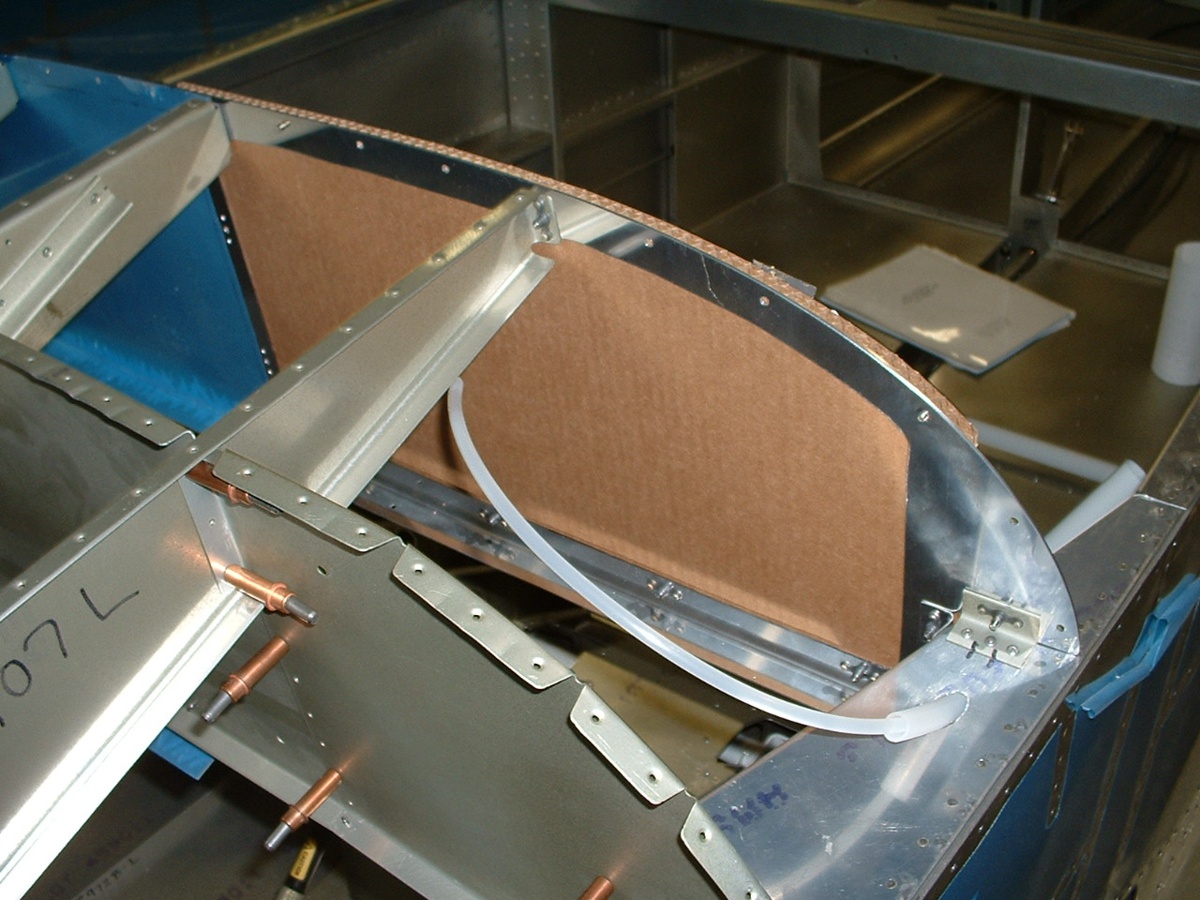 Here are my true airspeed and vertical speed meters.  At least they were the correct units.  In my next session, I hope to get these mounted in the cardboard along with my NavAid wing leveler controller. 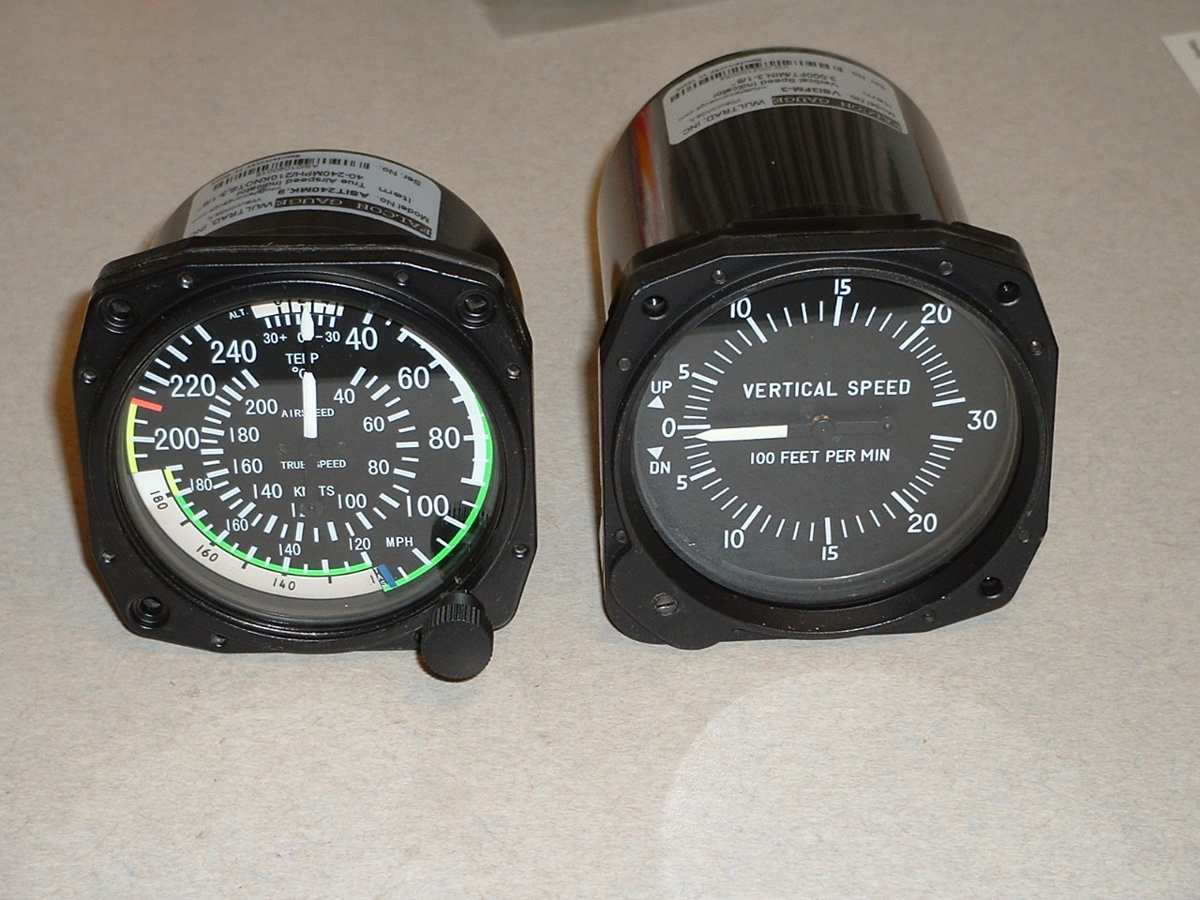