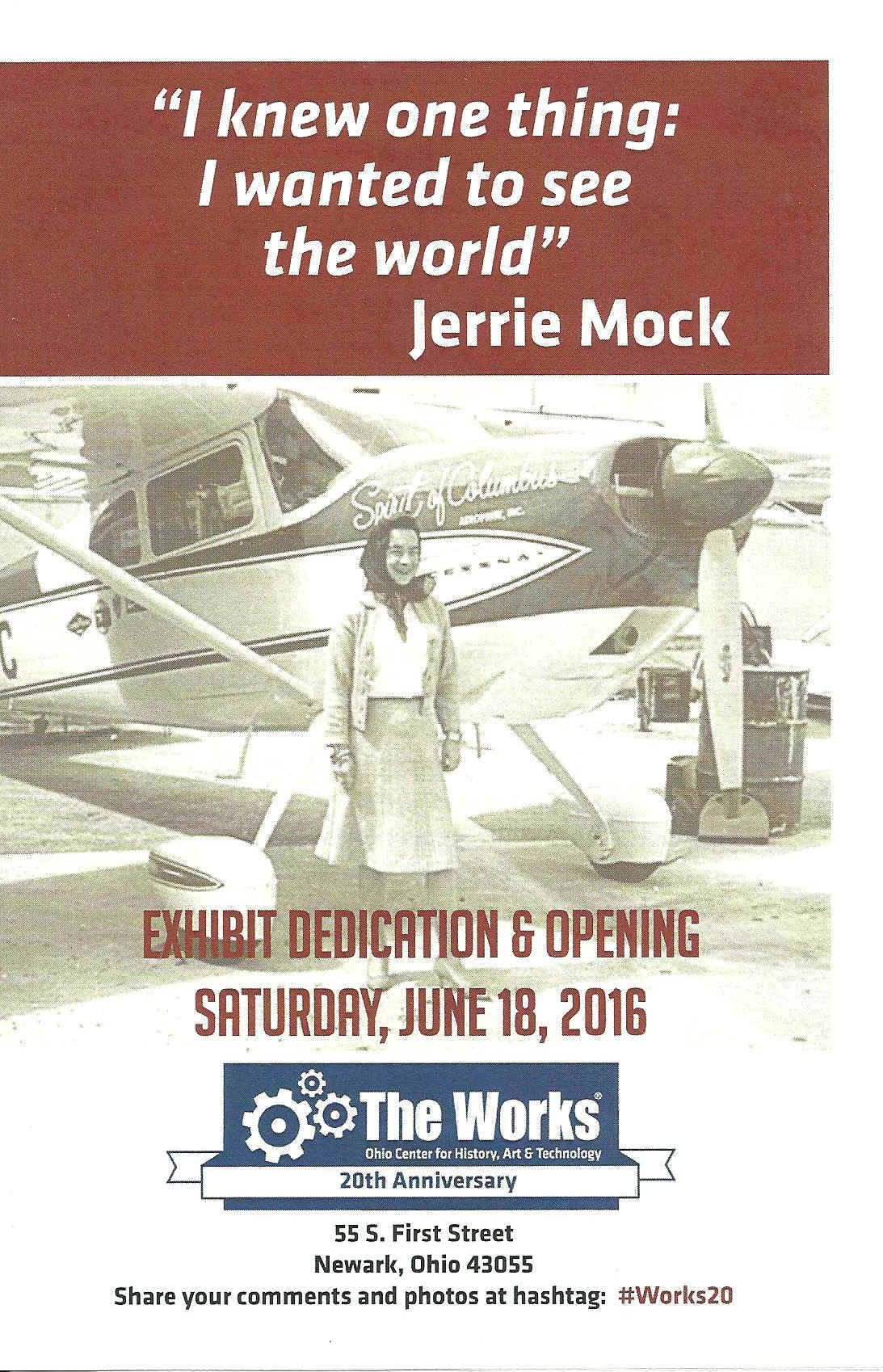 Here are the people who spoke during the dedication ceremony that started at 9:00 AM ended around 9:30 AM when the exhibit opened on the second floor of the museum.   This opening ceremony and exhibit preview were for the museum sustaining members, donors, family and friends of Jerrie Mock, and me.  The museum opened to the public at 10 AM this day. 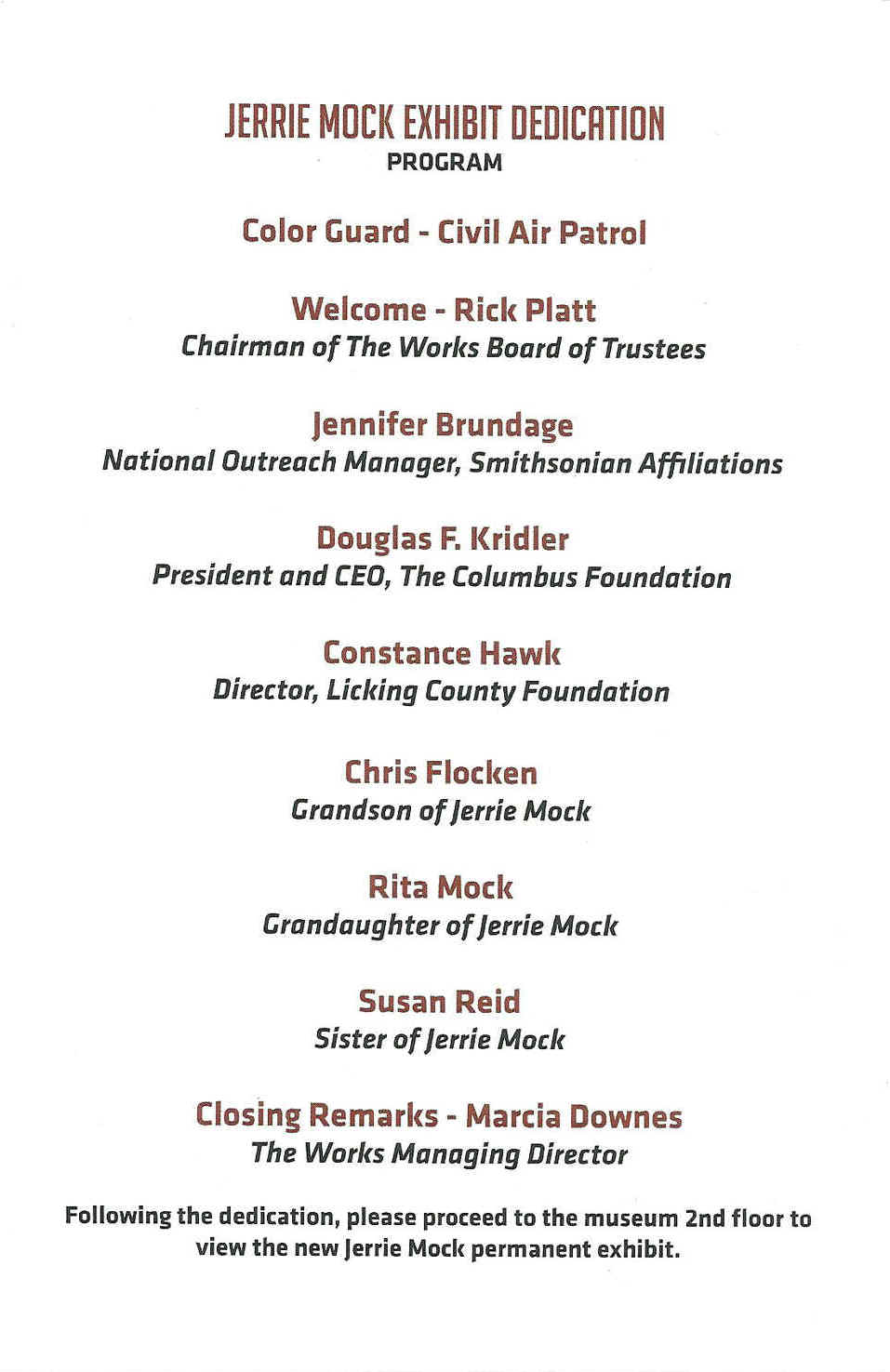 Here are the folks who brought the exhibit together in time for the 20th anniversary of The Works museum, which is the first day of the new Jerrie Mock permanent exhibit opening for all to experience hereafter. 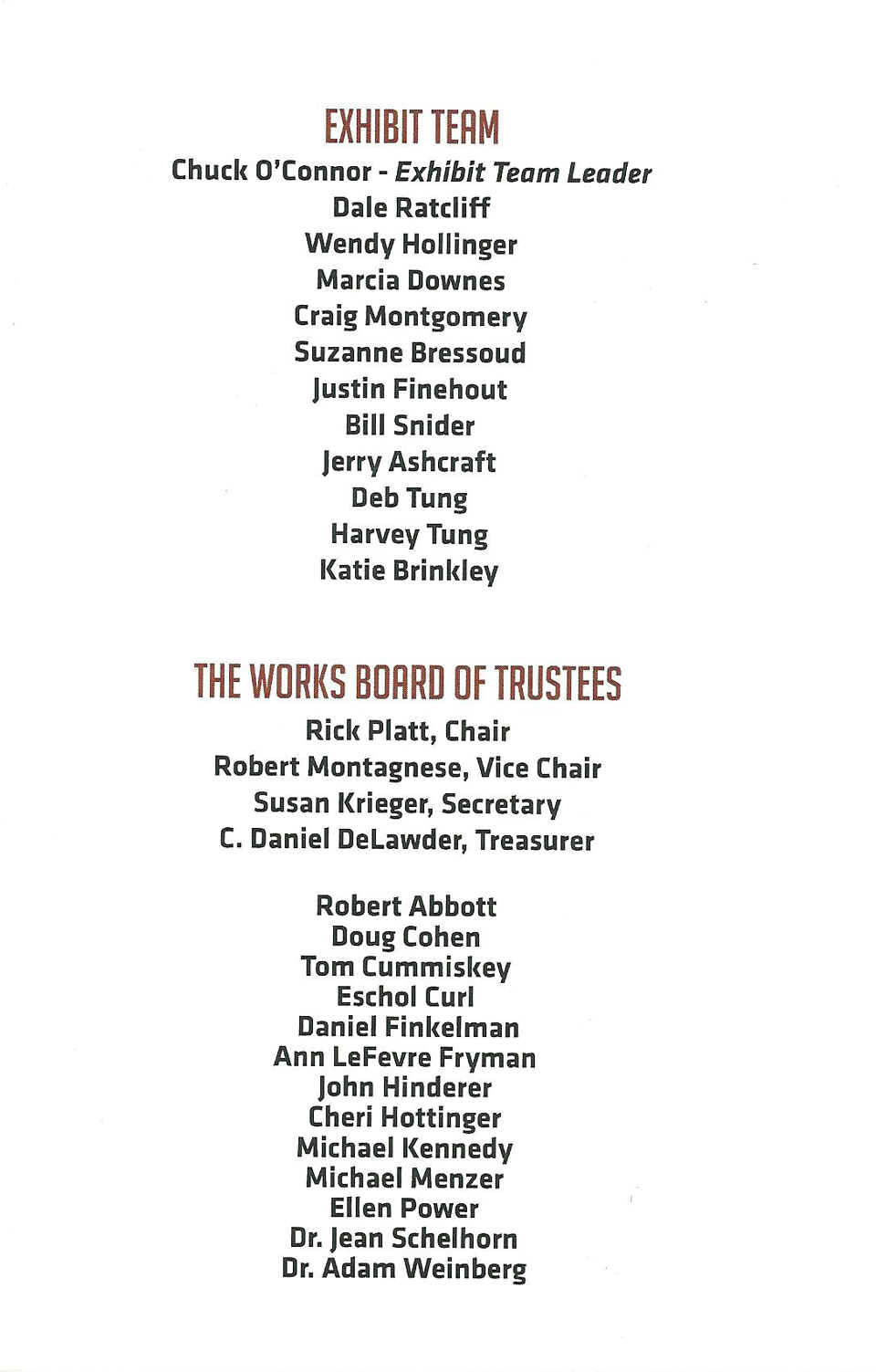 Here are all the people who contributed labor to the project. 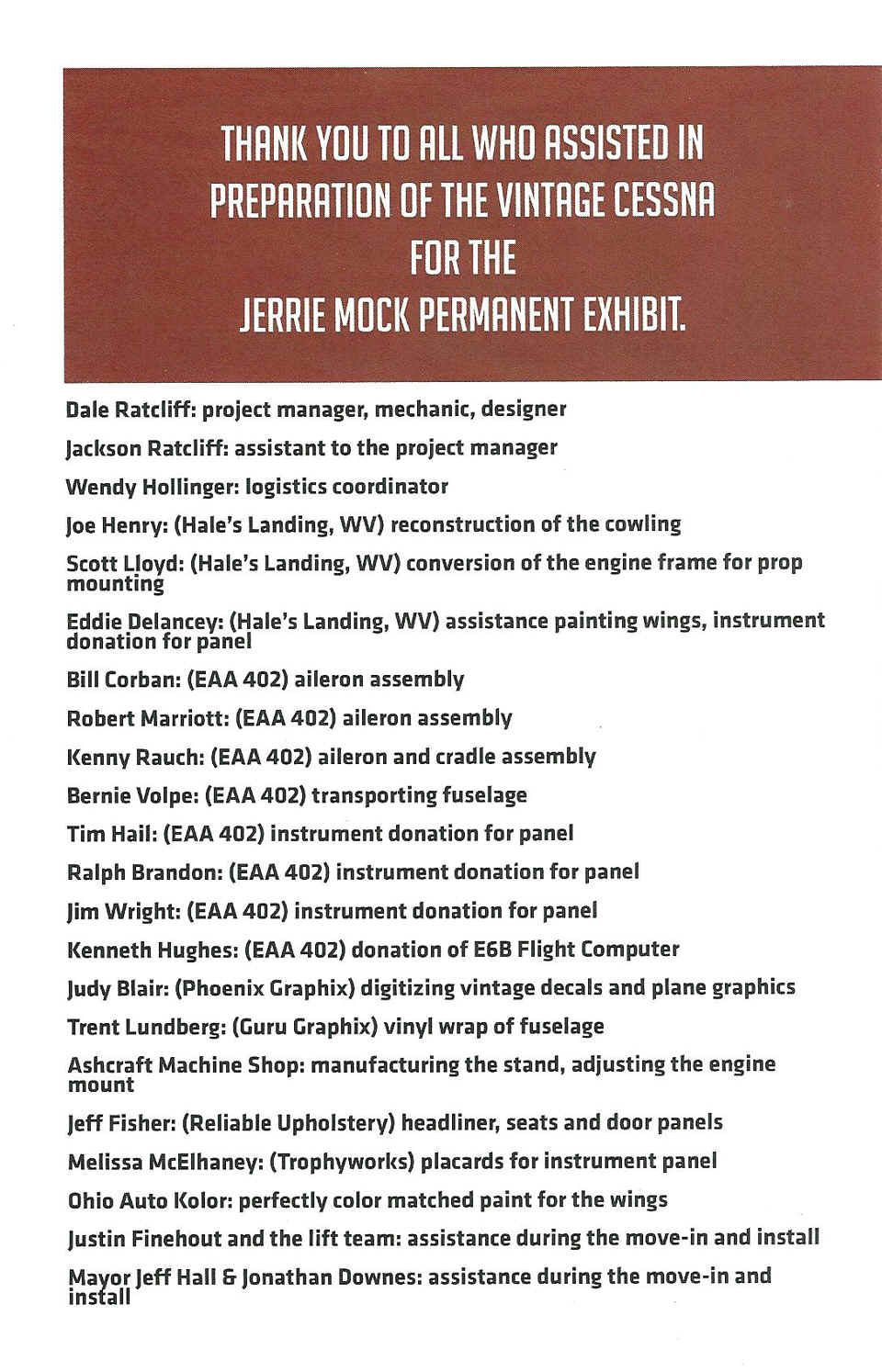 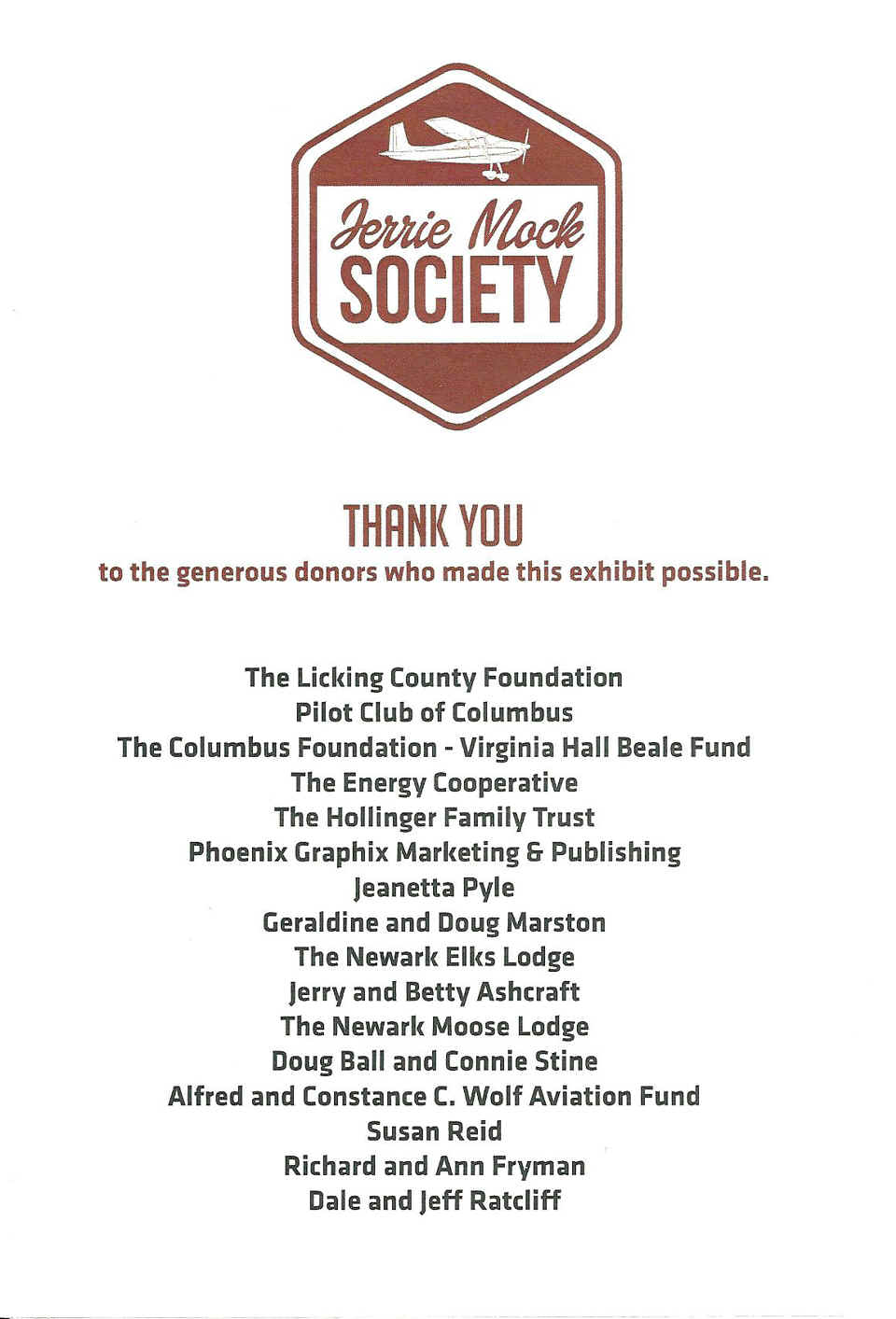 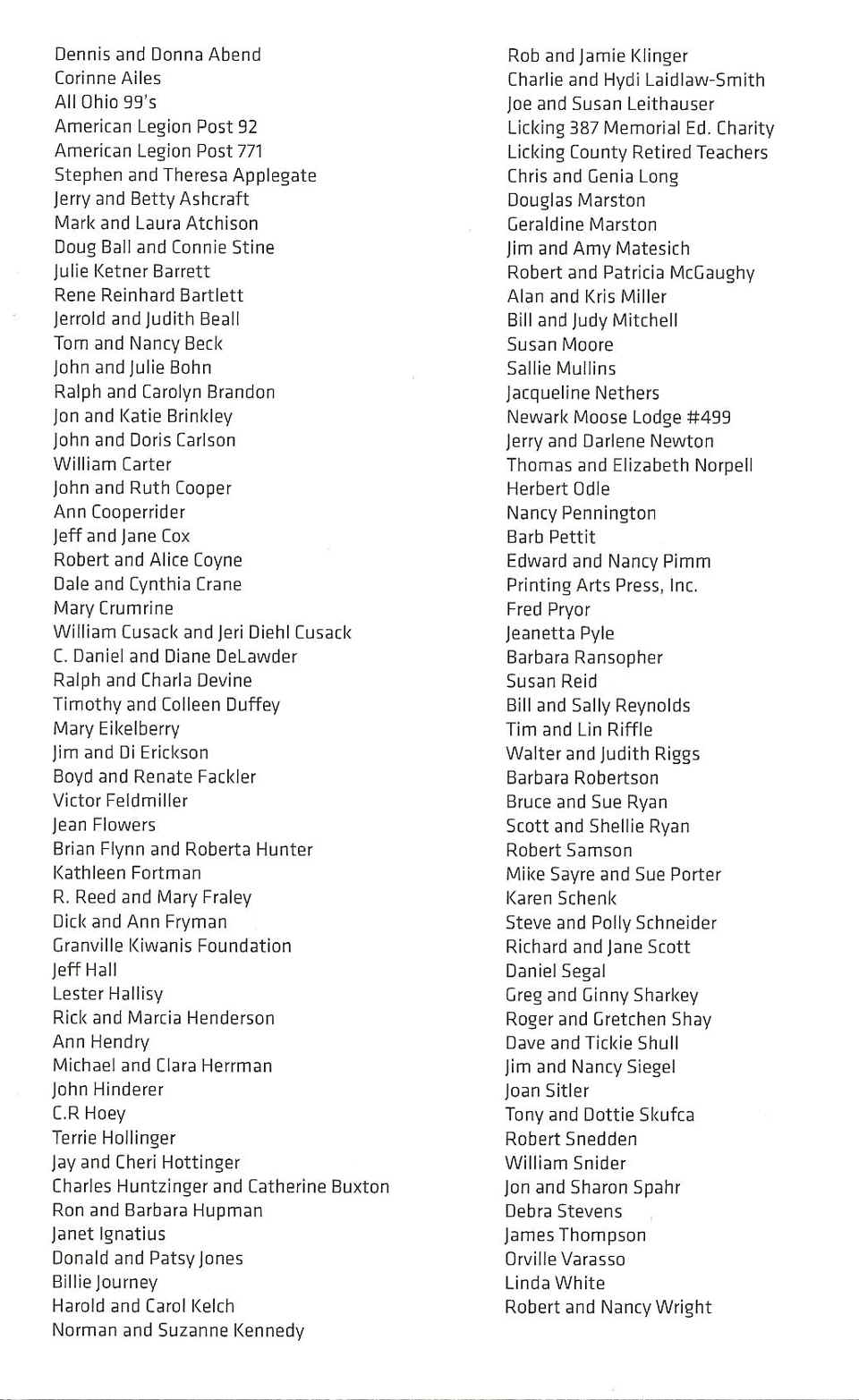 On Friday I met Jeff Hall, the Mayor of Newark and Jonathan Downes, husband of Marcia Downes who is The Works museum managing director.  Jonathan is very tall and easily assisted in mounting the wings to the fuselage of the airplane in the exhibit.   He did not need a ladder as you will see in a photo later in this series of postings.  I had to set up my computer before the dedication ceremony as I will present a session at 10 AM about using my Google Earth tour files to fly around the world with Jerrie Mock.  I ran my 15-minute movie continuously before the beginning of the ceremony.  My photo below shows the crowd gathering early for the presentation.   The front row seats are reserved for family and VIP's taking part in the ceremony.   Breakfast snacks were served at the back of the room.  They had my favorite brand of sausage biscuits and yellow mustard. 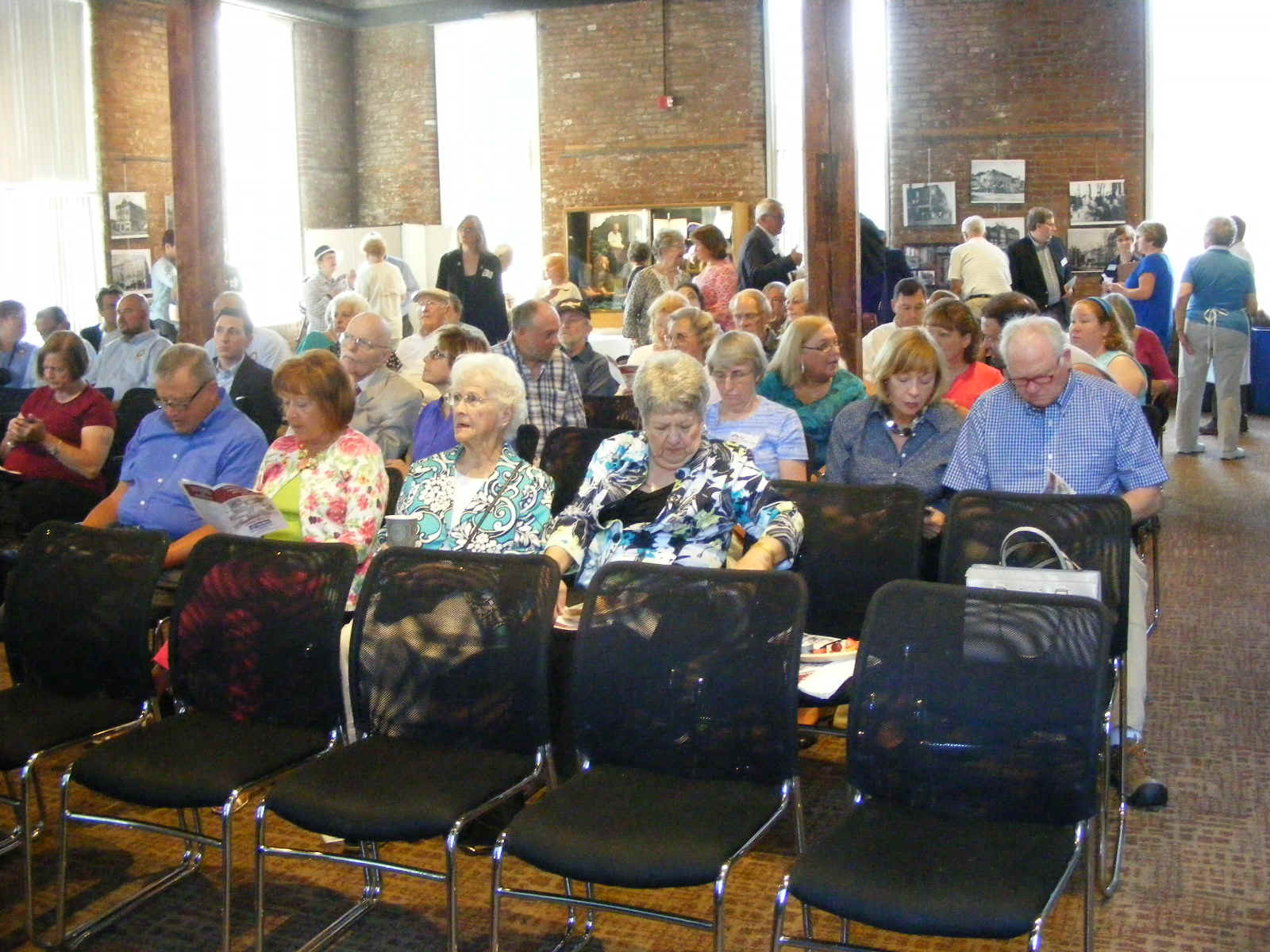 I shut down my video when it was time for the first speakers to begin the dedication program.  I moved to the back of the room to get some photos of the standing room only crowd. 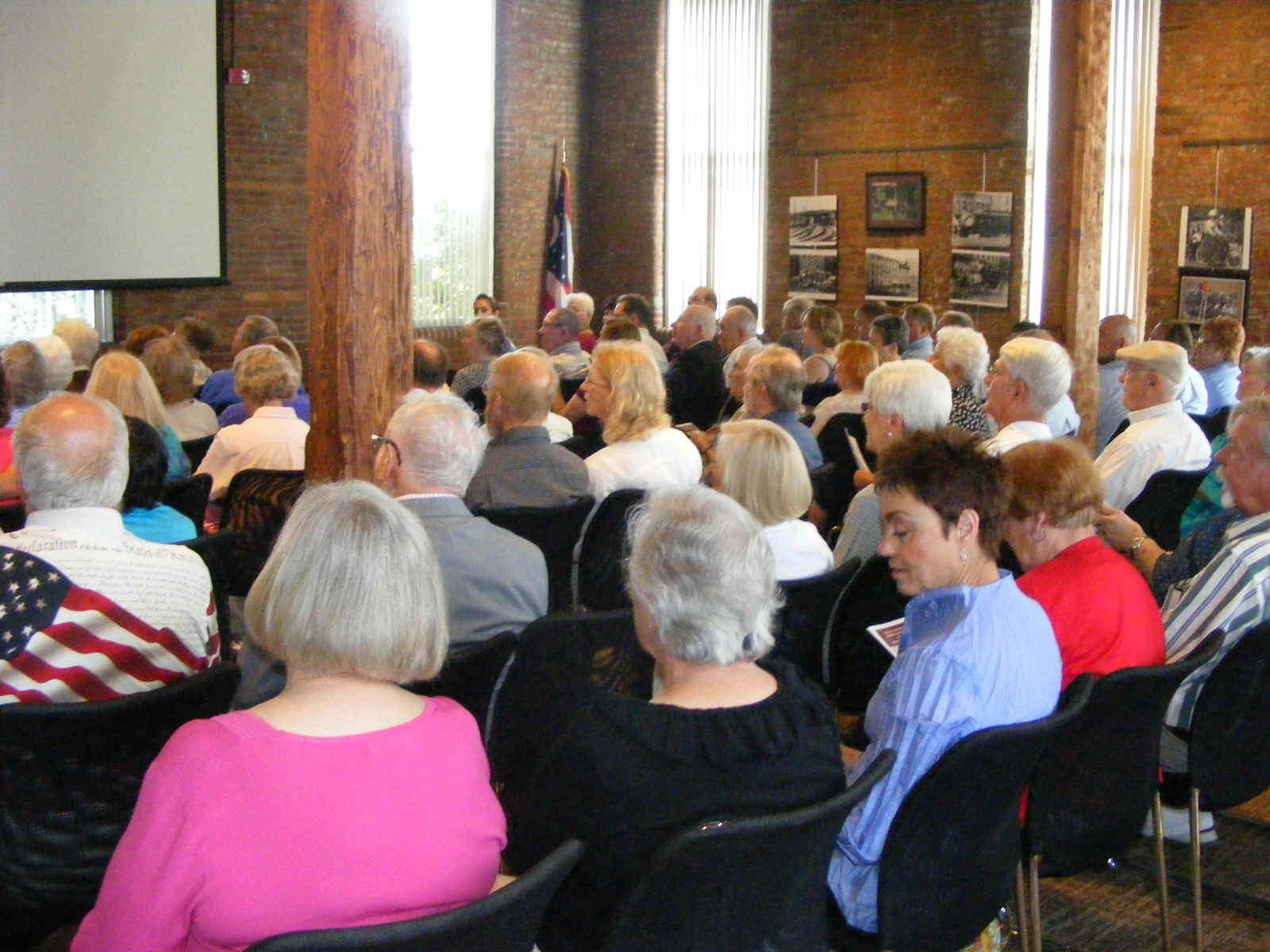 The lady in the blue dress is Marcia Downes, managing director of the museum.   She is standing at the back of the room near the breakfast buffet tables. 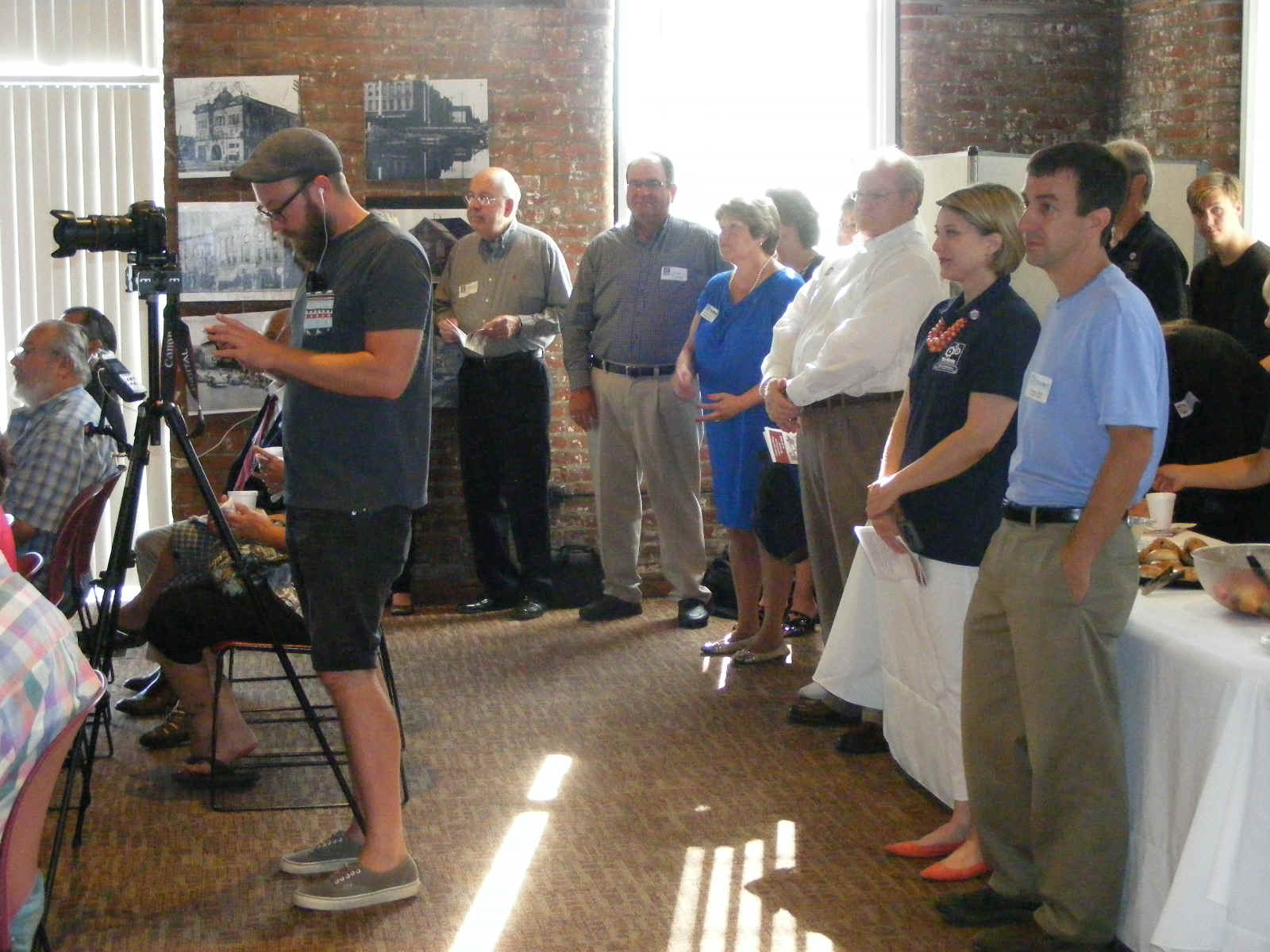 The speakers included a staff member for Ohio Governor Kasich, a congressman, and the Mayor of Newark. 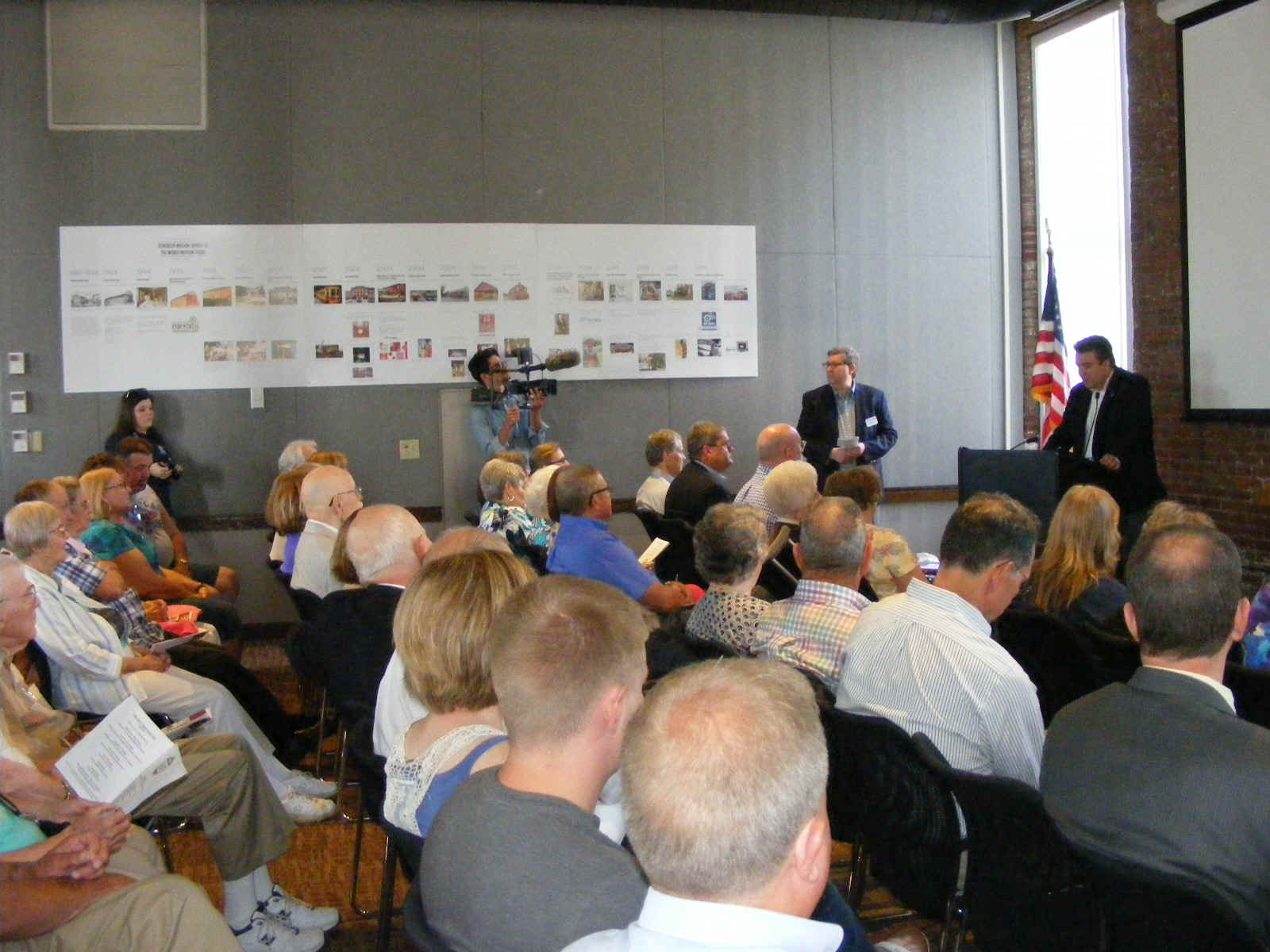 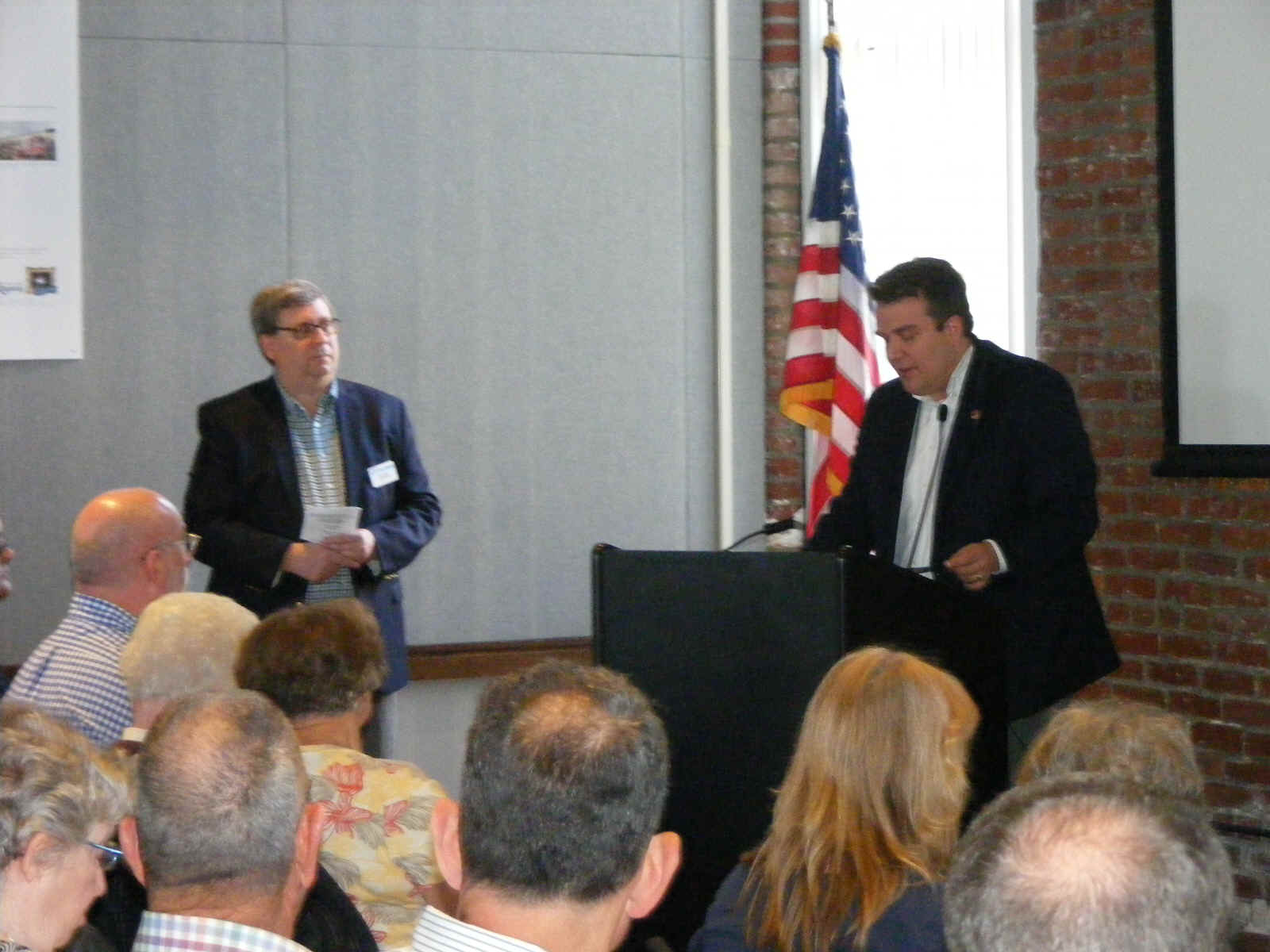 The family of Jerrie Mock is sitting in the front row, and an actress who plays Jerrie in a stage play.  Grandson Chris Flocken is sitting at the left edge of this photo. Chicago Actress Suzy Brack is sitting next to him with a dark wig and corsage flower in costume as Jerrie Mock.  The lady in the pink dress with white hair is the widow of Roger Mock (Jerrie's son) Nancy Mock and beside her in the blue print dress is their daughter Rita Mock.  Next to her is Jerrie's younger sister Susan Reid with her daughter Julie Bohn drinking from the cup. 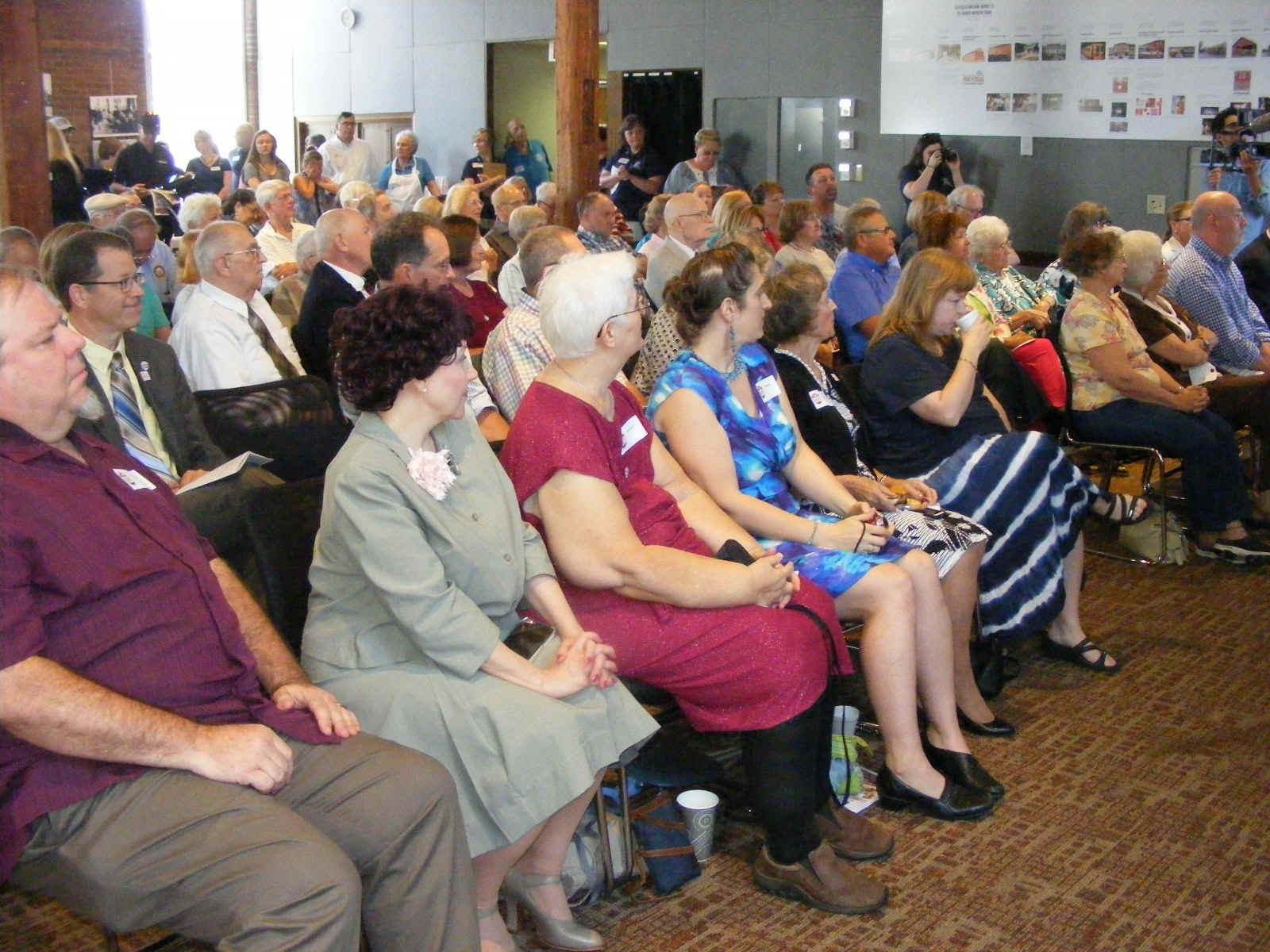 Chris Flocken is the grandson of Jerrie Mock.  Chris presented some valuable Jerrie Mock flight related memorabilia items to the museum to be added to the display case in the exhibit. 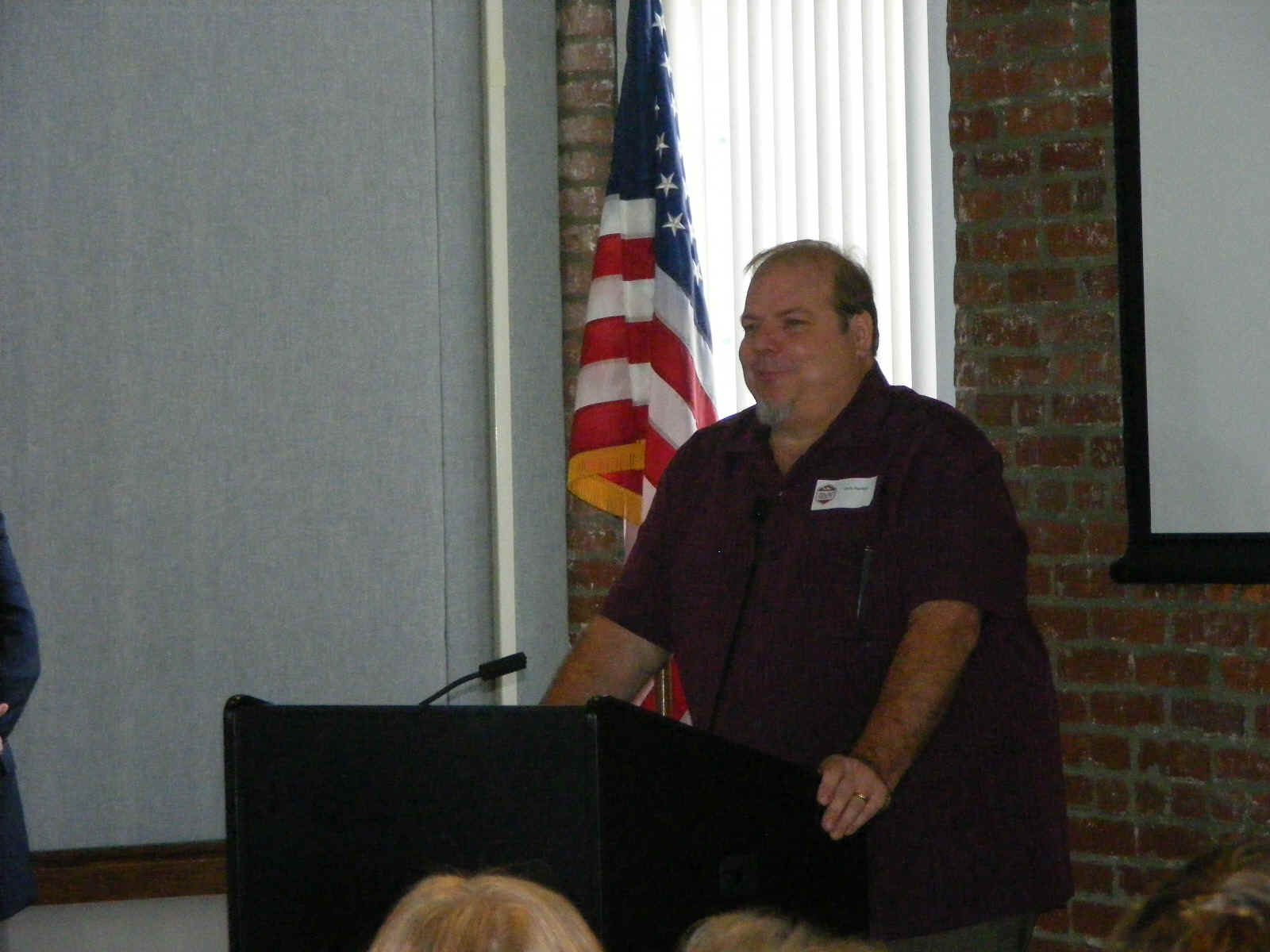 Rita Mock is Jerrie's grandaughter who got her tall size from her mother's side of her framily. RIta has written and produced a play about Jerrie.  She talked about the stories her grandmother would tell about the flight around the world.  Rita was home-schooled and lived with Jerrie in Florida for two years during her home schooling.  Jerrie was well versed in world affairs and wanted Rita to visit more countries that she did.  Jerrie urged Rita to be anything she wanted to be when she grew up.  She lives in the Chicago area and produces plays now.   Who better to write a play about Jerrie Mock than someone who lived with her. 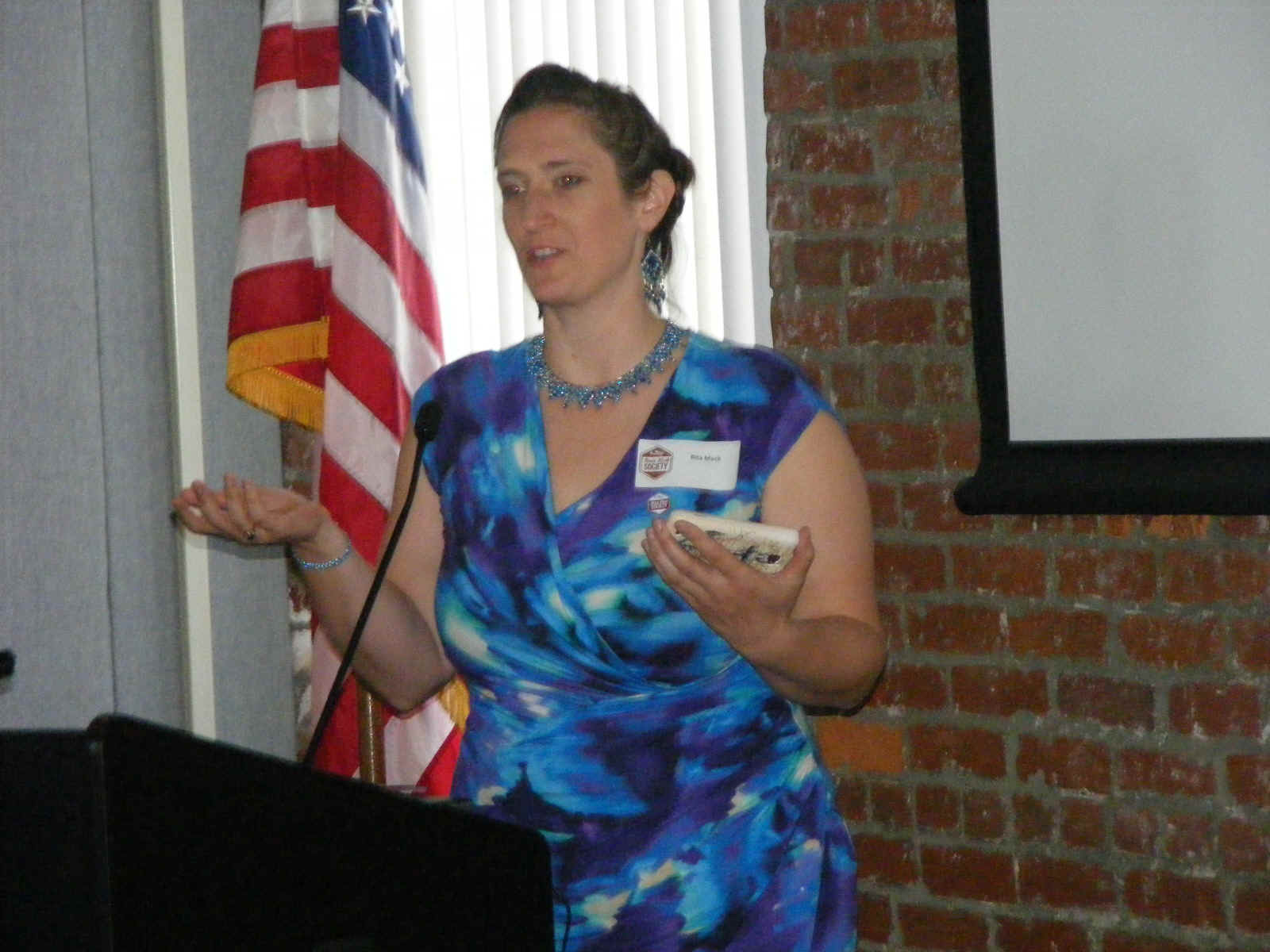 The exhibit upstairs opened for the dedication attendees at 9:30 AM.  I went up to take some photos for this web page. Marcia Downes listens to Suzanne Bressoud, a staff member at The Works who was part of the exhibit team working to meet the deadline for this premiere. 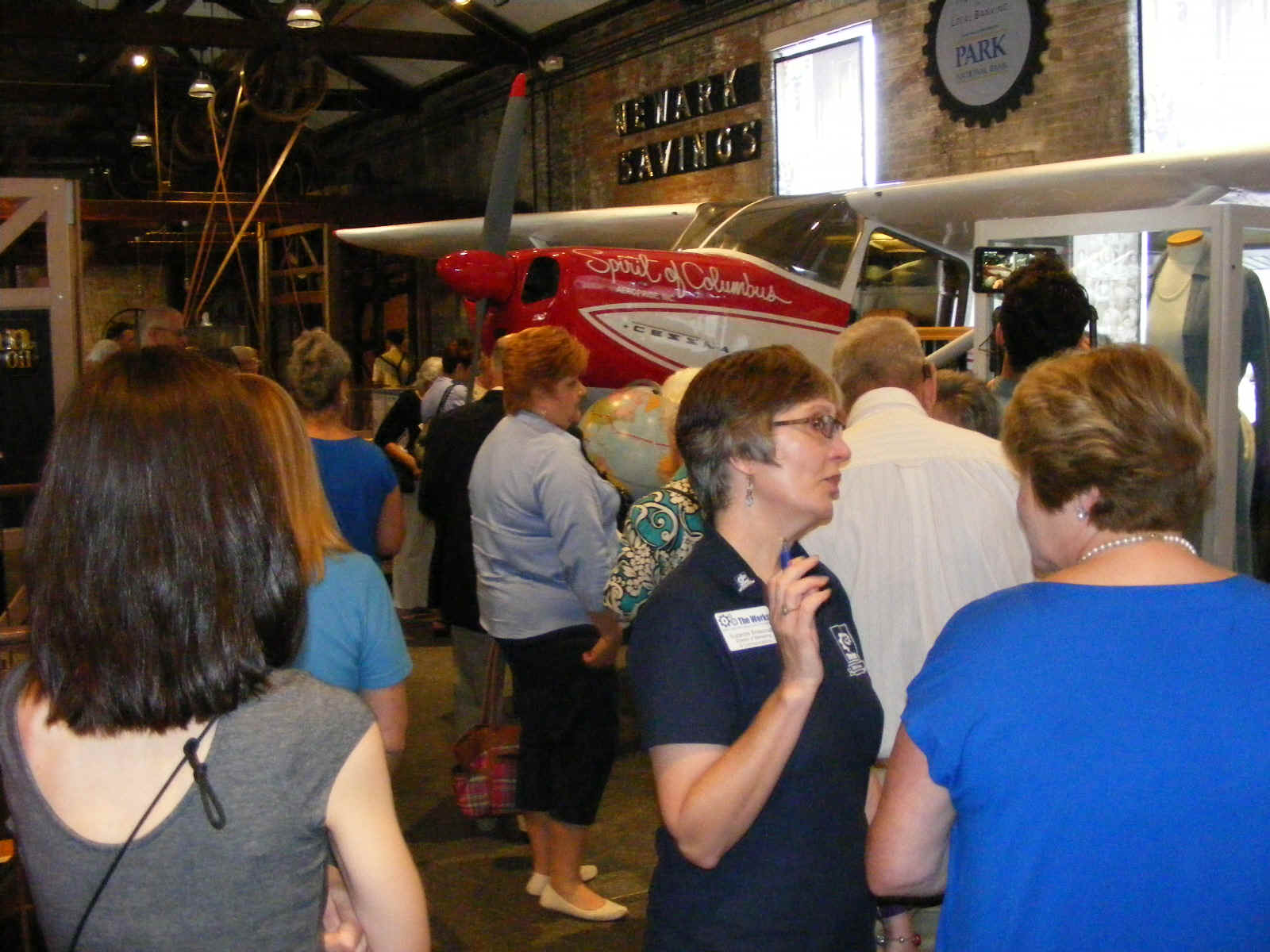 The crowd quickly moved to see the different areas in the exhibit space. 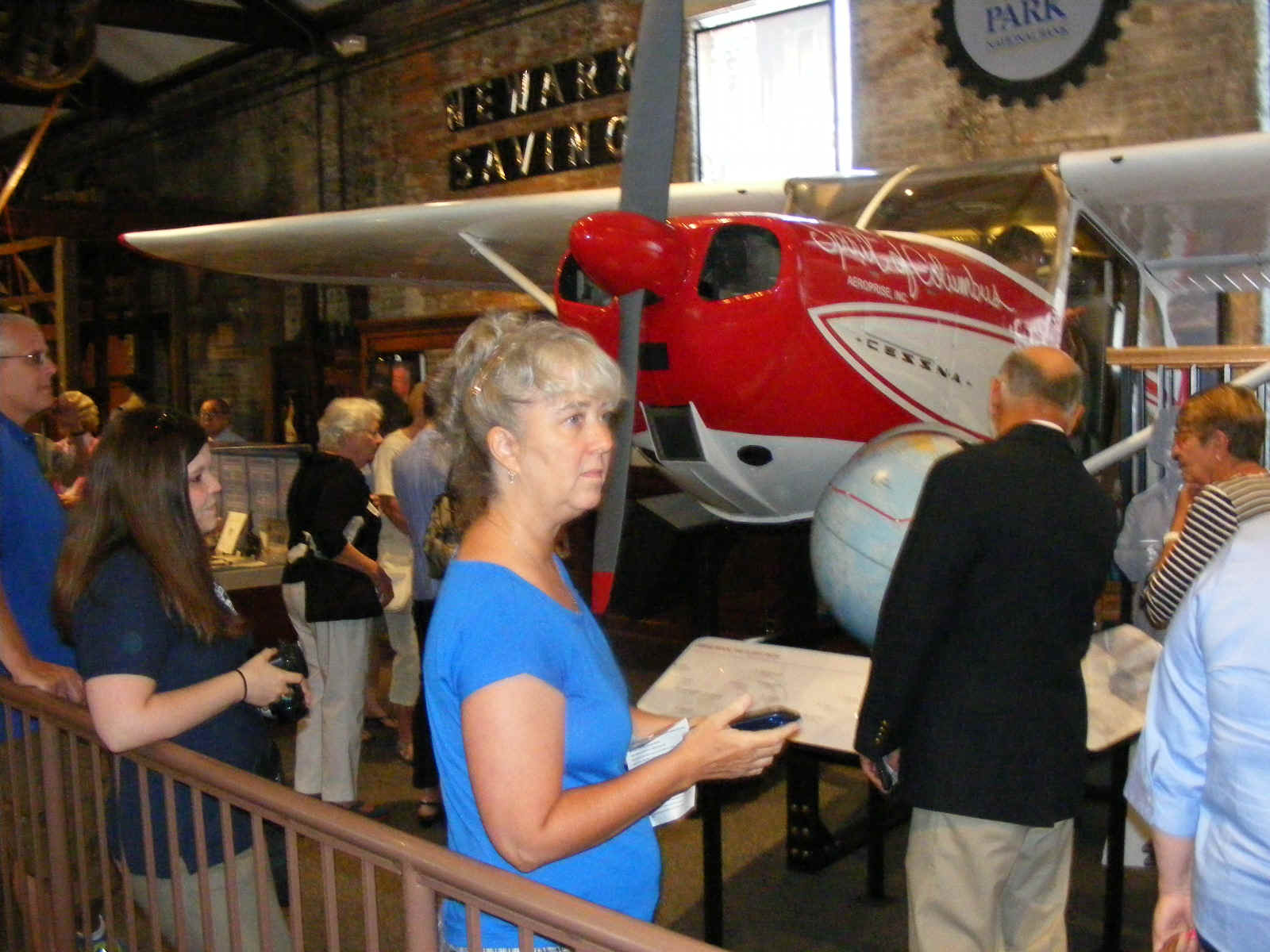 Marcia saw me trying to take a photo and was trying to get out of the way.   You can see how elated she is to have the exhibit opening on time.  She makes eye contact with me and gently nudges Suzanne out of my intended photo of Wendy Hollinger seen here in the background. 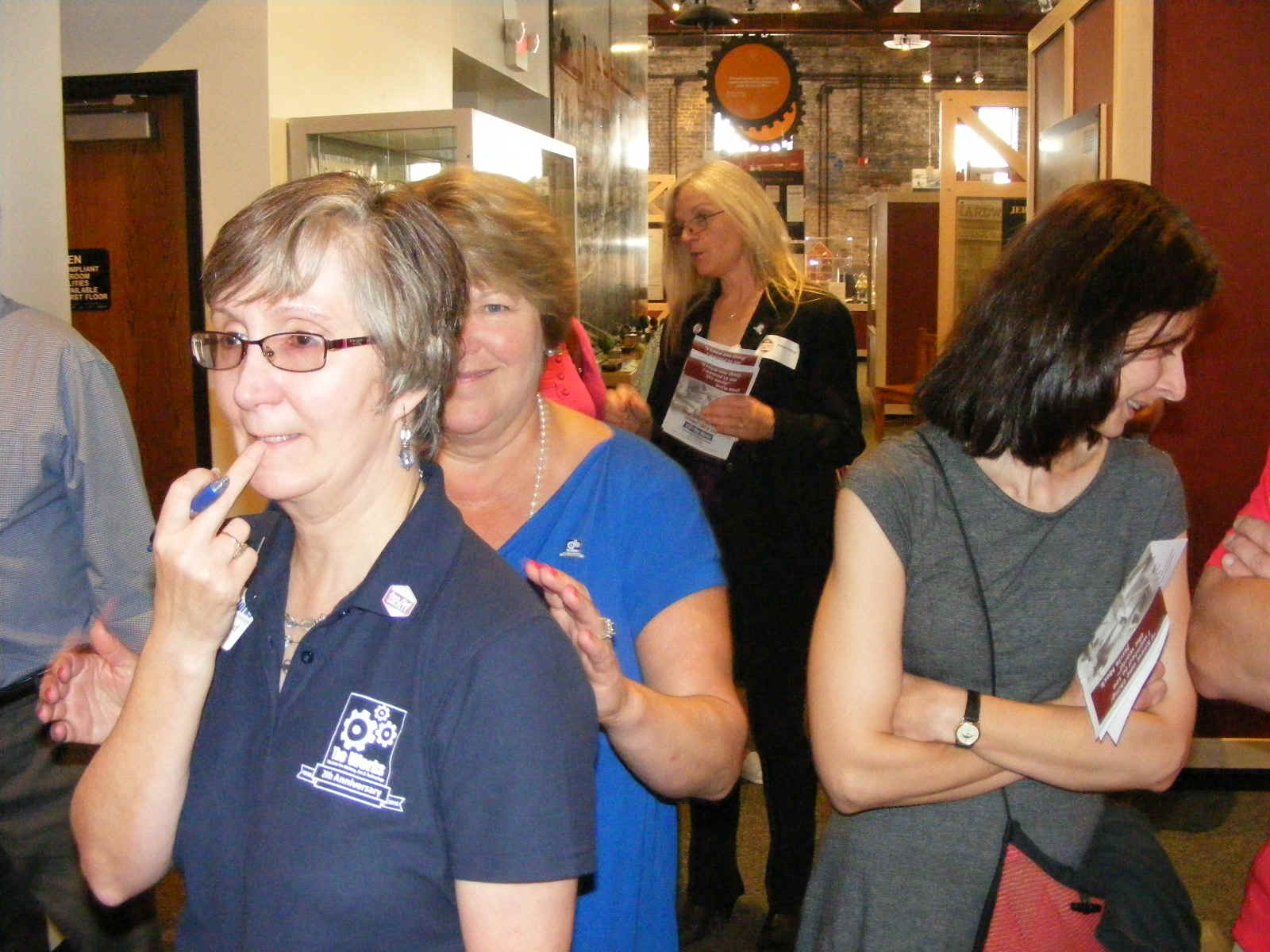 Wendy is having a discussion with Ruth Jacobs who flew around the world in 1996 with her long time friend Bill Signs flying from Dallas Love Field and landing on all SEVEN continents during a 50-day journey.  The airplane they used was a Cessna 210L built in 1974.  Their flight is listed on this web page of "Earth Rounders":  http://www.earthrounders.com/singles.php.   The aircraft registration number shown there has a typo error.  I had a chance to talk with her later in the day. 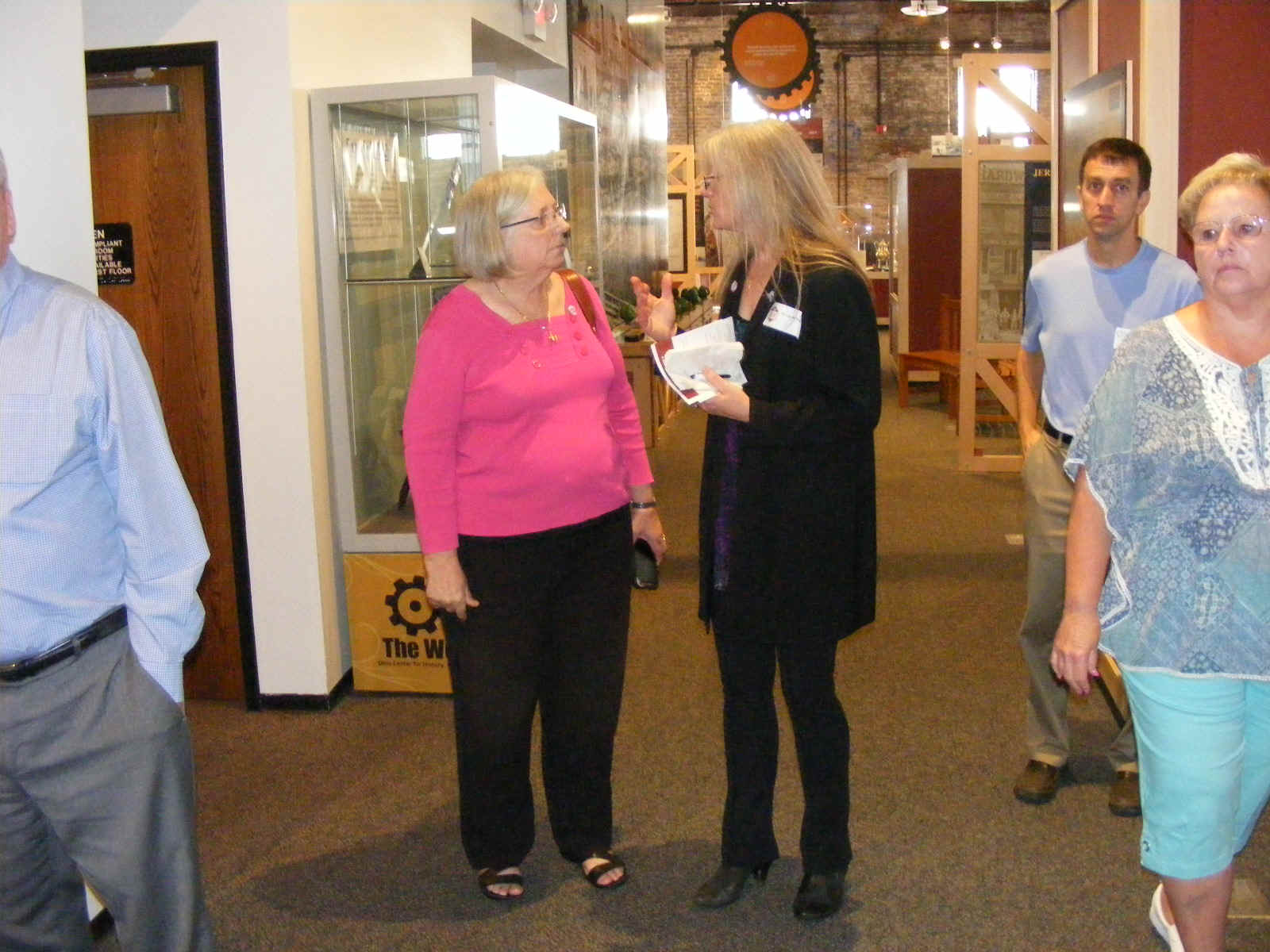 I had to return to the meeting room downstairs for my presentation that began at 10 AM.  That meeting is photo documented by others who attended as I was up front with my computer.