January 10, 2004: A Saturday off and a trip to check on the progress of a fellow RV-9A builder, David Edgemon.  I stopped at Moontown airport on the way to Huntsville at David's request.  He indicated he would be there working on the hangar he shares with another pilot.  The cold weather put a damper on that activity, but we did visit another RV owner.  As you can see behind the RV, Moontown is a grass strip.  Mark Pickens built this RV-9A with slider canopy.   The unorthodox rudder bracing is due to the fact that the rudder cables were disconnected when I took this photo.  He was finally getting around to putting on rudder stops.  The airplane is flying and has over 50 hours on it. 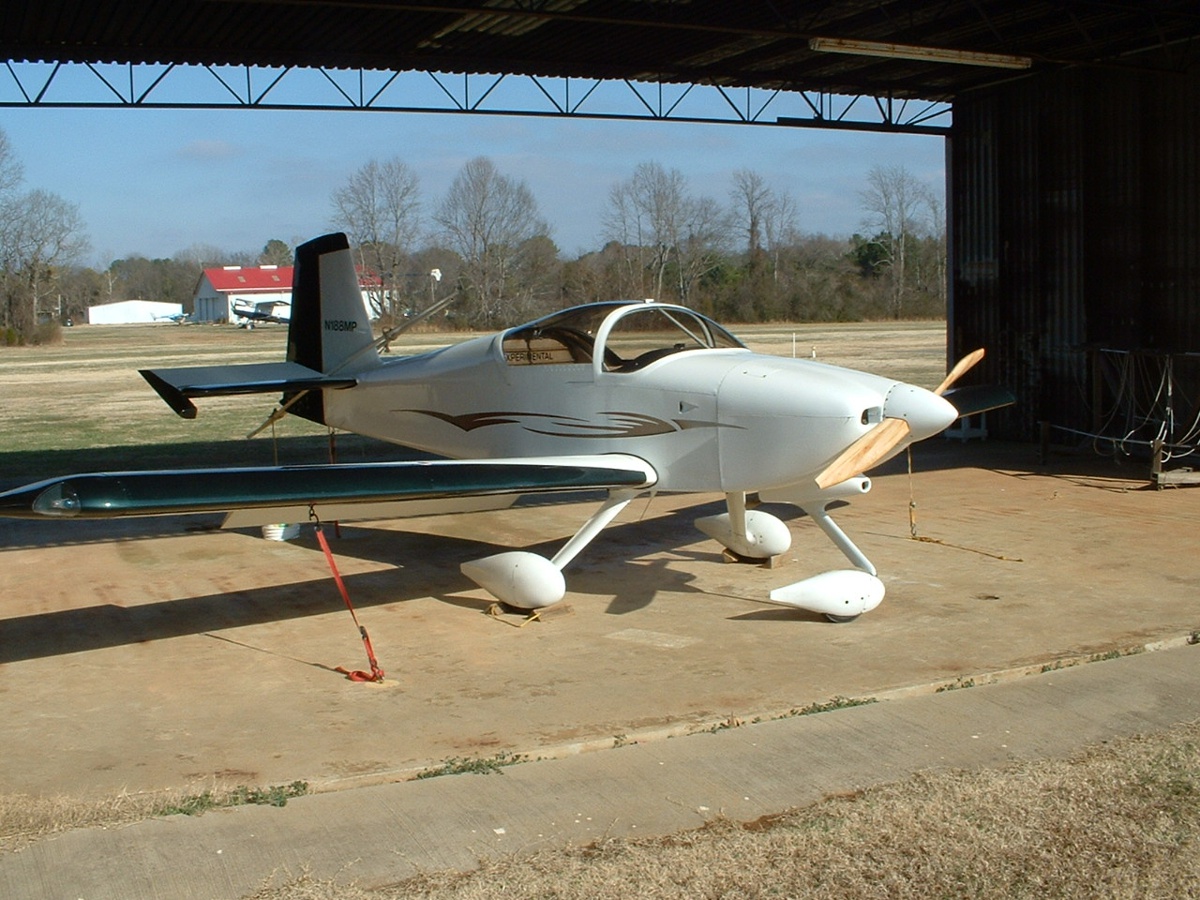 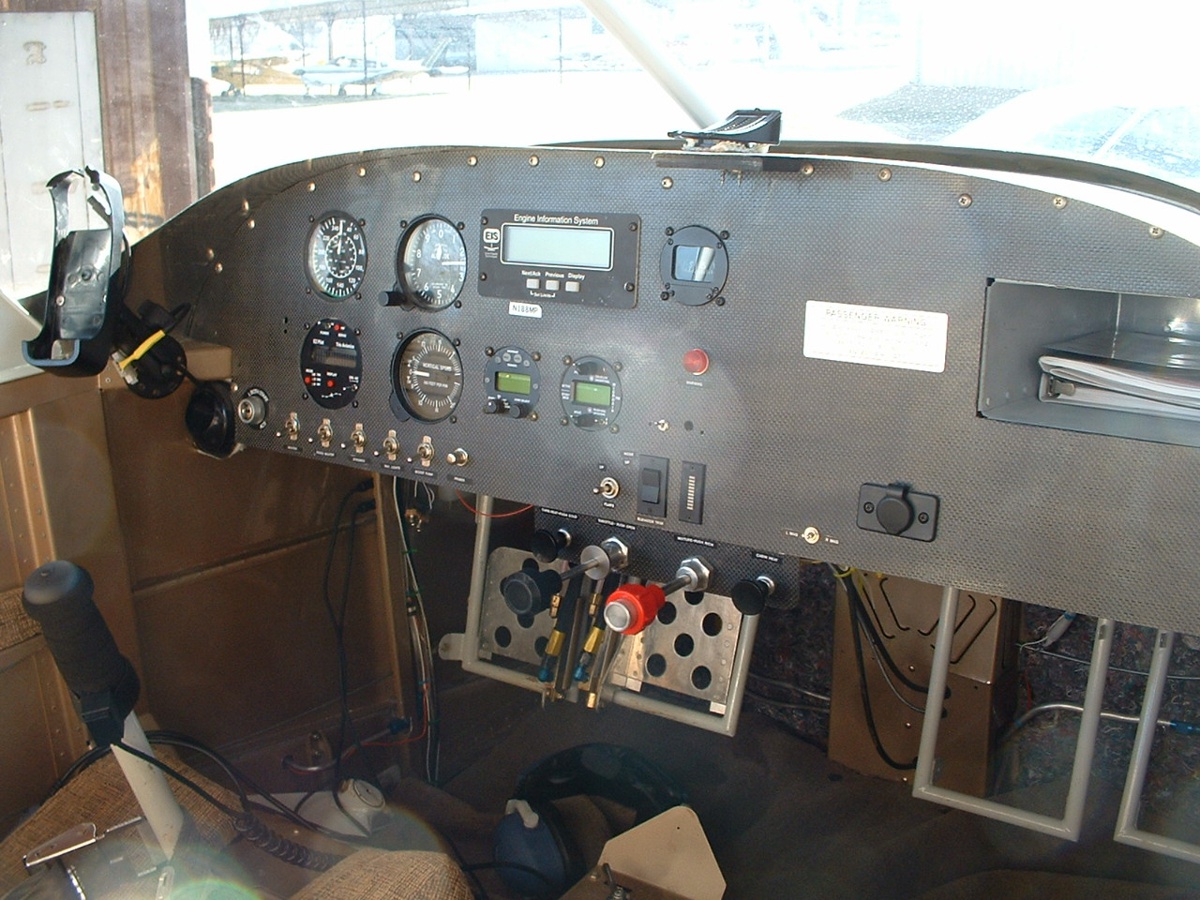 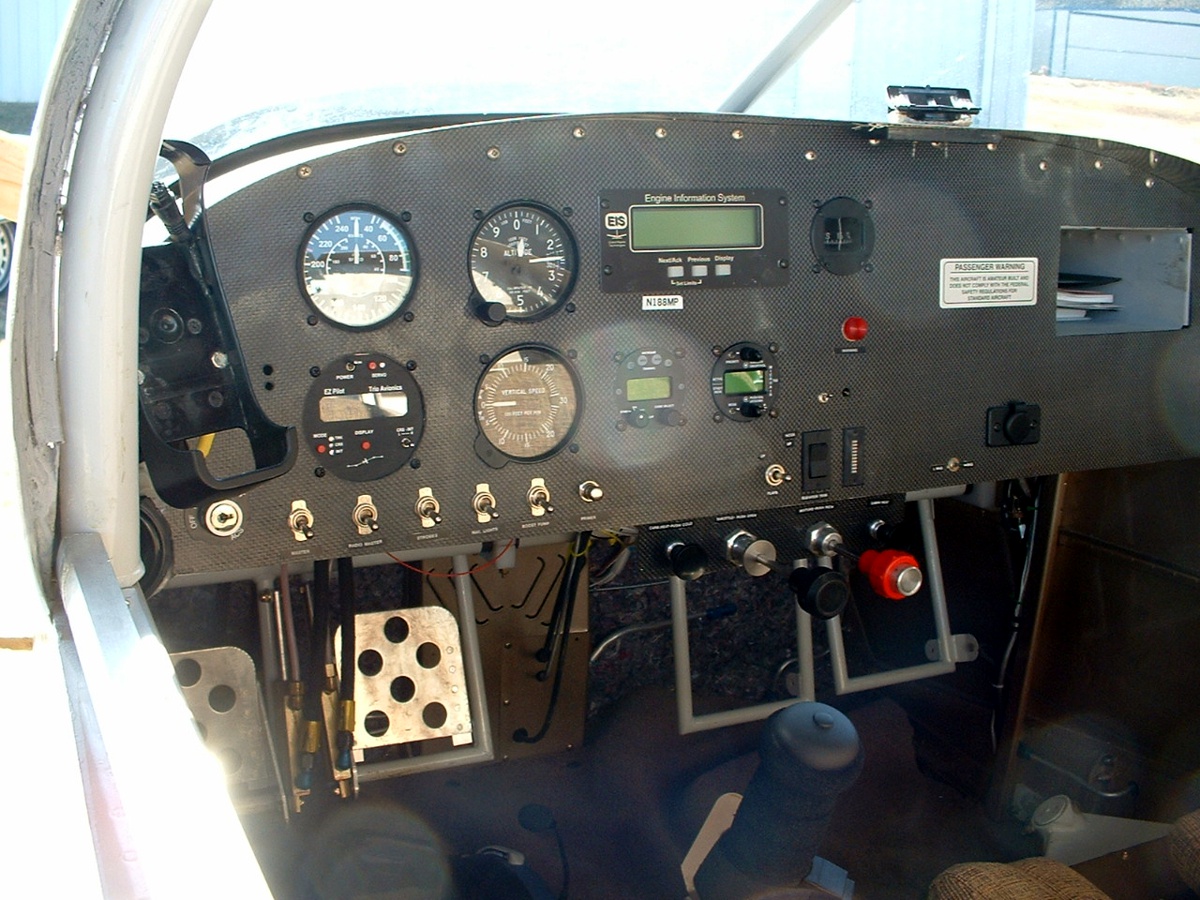 After lunch, David and I went to his house and the RV shop.  Here are a few pictures showing his progress.  The engine is mounted and much of the plumbing is complete, but there is still plenty to do. 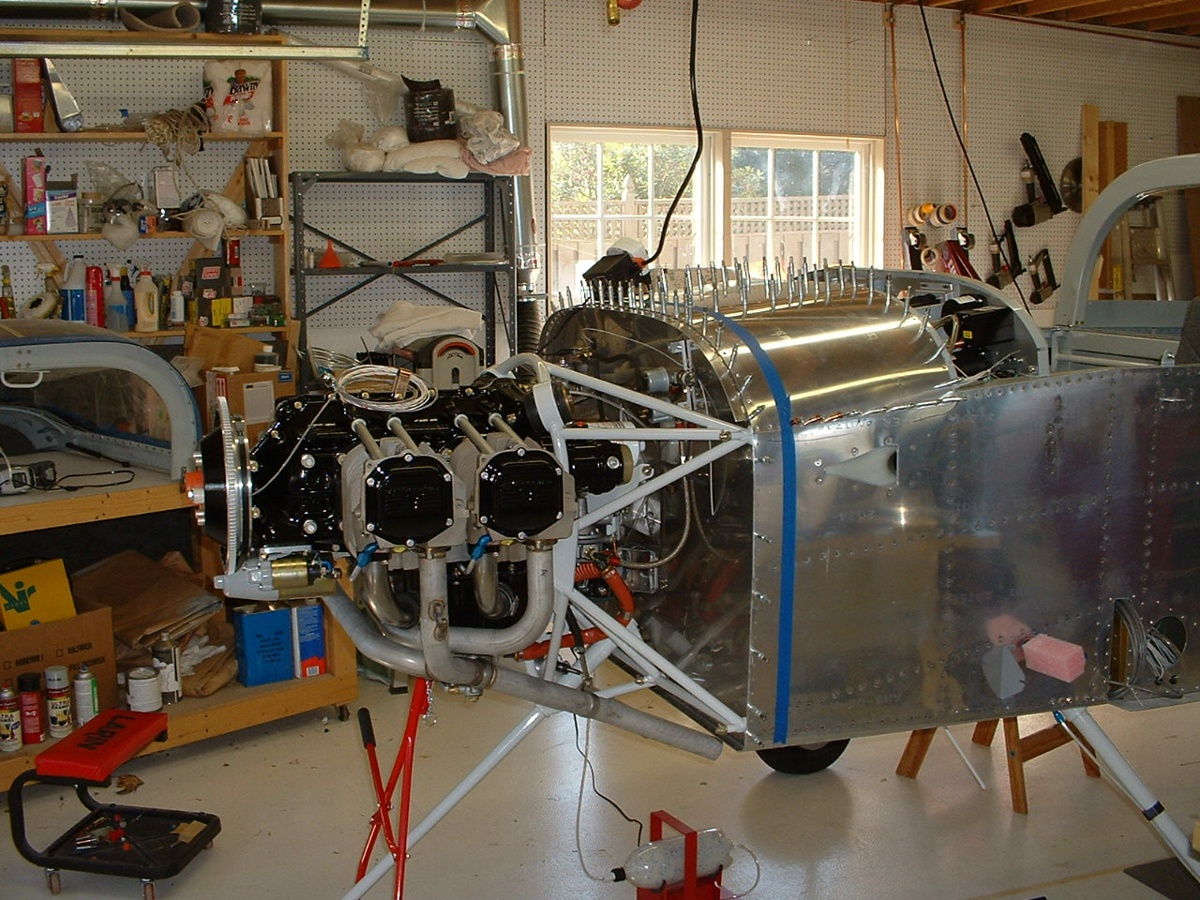 Here is the right side of David's panel as it exists today.  He has mounted his Grand Rapids Technology engine monitor at the top of the radio stack area and hiding its logo behind the panel opening.  The red light is the fault warning from that unit.  That is an Apollo SL40 Com radio and a Garmin solid state transponder at the bottom. 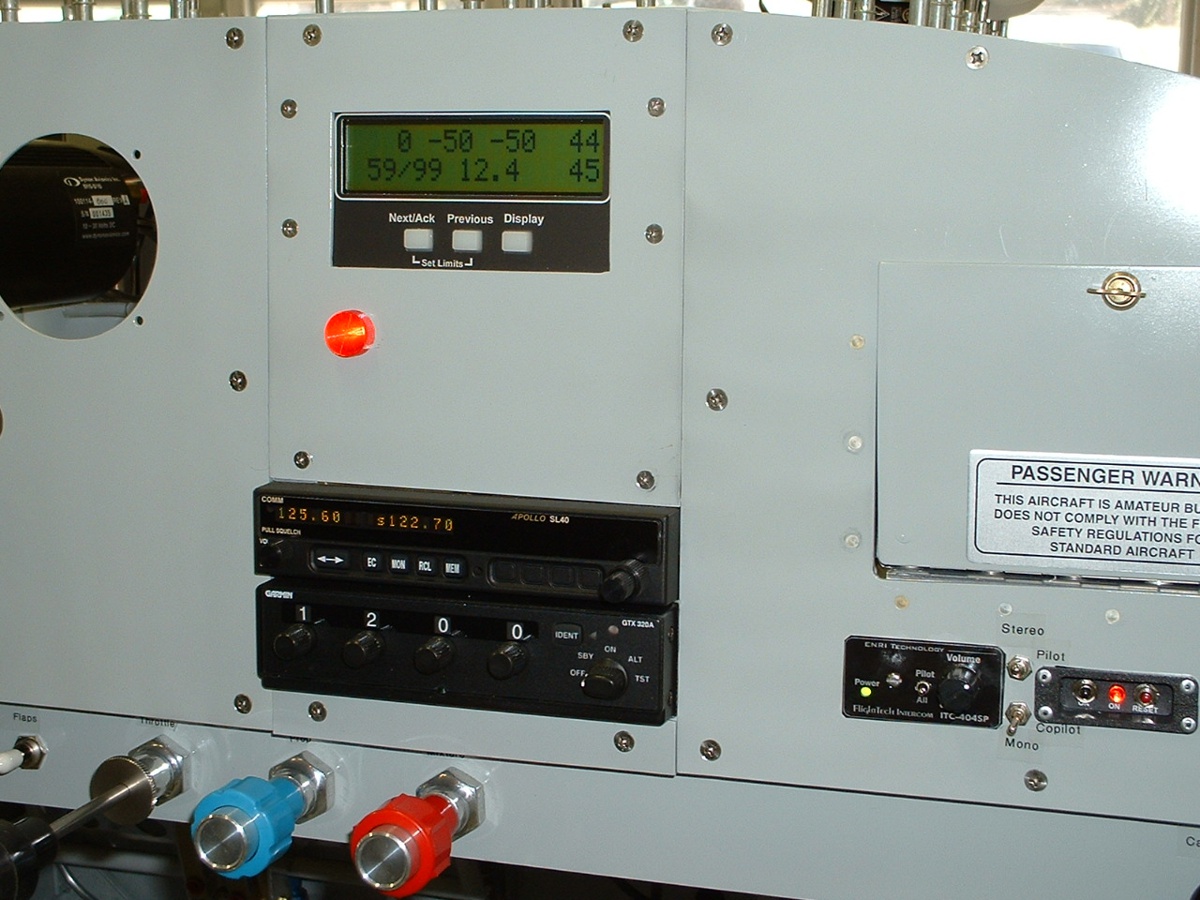 On the left side, the Dynon display dominates the landscape with the Garmin GPS 196 going right below it.  For those of you wondering how bright the Dynon unit is, notice that this is a FLASH picture and it is still quite visible.  There is no ignition switch on the panel.  That is the only circuit breaker on the entire airplane.  There is a large fuse block assembly above the glove box accessed when the canopy is up.  David has also diode isolated the essential electronic devices from everything else in case of an alternator failure.  This provides minimum required electrical current from the battery until he can land.  David has many hours in gliders and is used to flying on battery only.  His philosophy is there is nothing that important that is fused that cannot wait until he is on the ground. 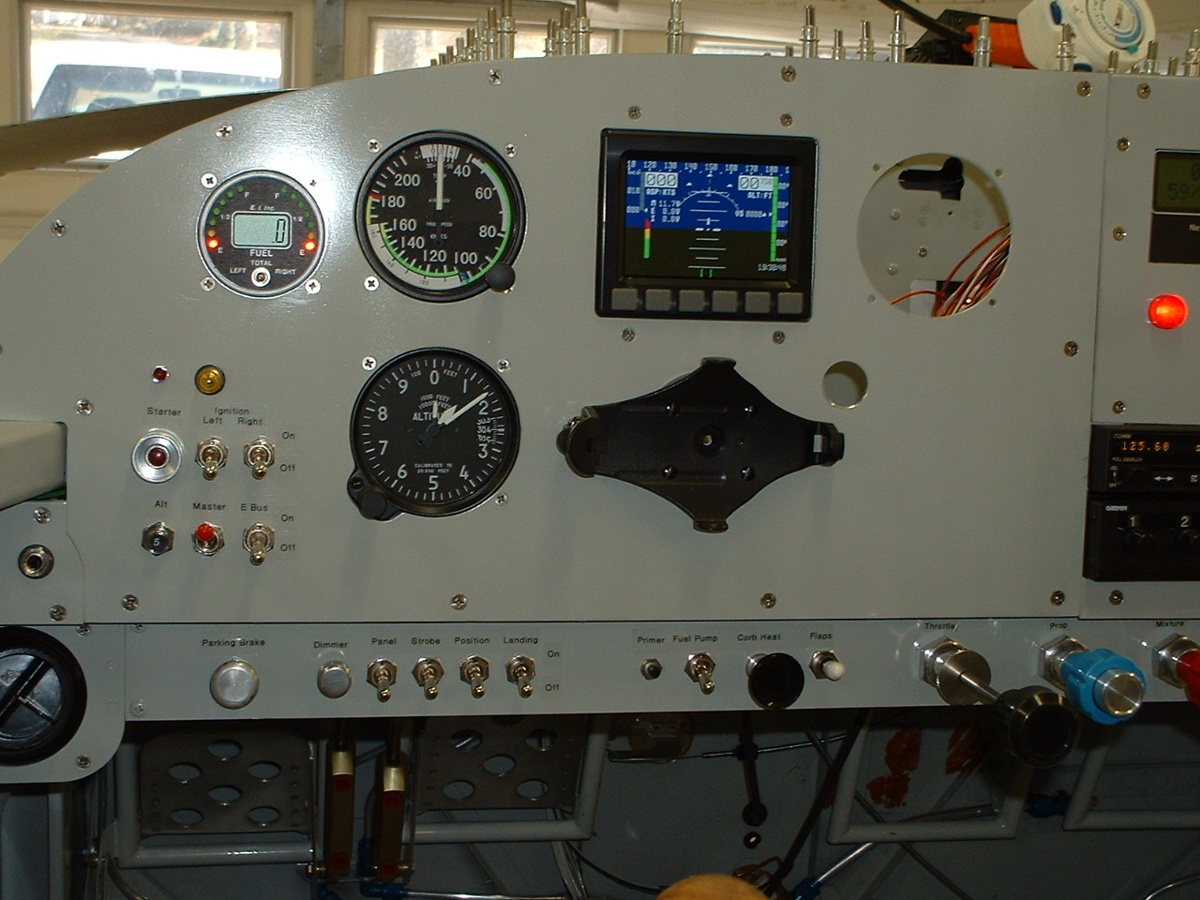 He has his upholstered seat cushions from Cleaveland Aircraft Tools on hand.   I tried them out to see how my fit was in this airplane.  This is a tip-up canopy airplane and I still struggled to get in and out, bumping my knee into the lower switch panel at least one time.